Russian President Vladimir Putin has signed a nuclear energy cooperation deal with Argentina during his tour of Latin America. He called Buenos Aires one of Russia's most strategically important allies in the region. 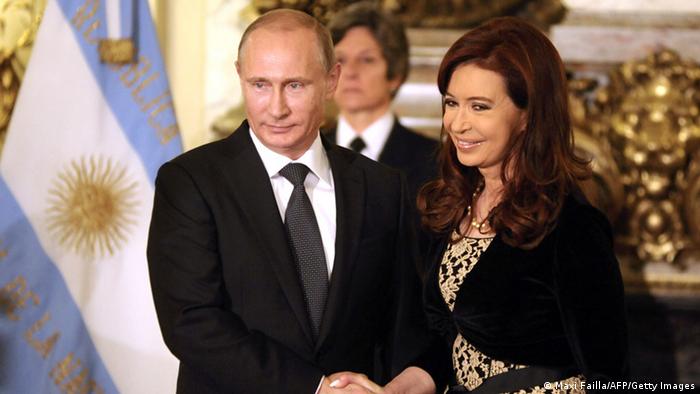 "These are very important agreements," said Argentine President Cristina Fernandez. "Argentina is a leader in Latin America in terms of nuclear energy generation. They reaffirm our bonds of friendship and strategic links."

A Russian delegation traveling with Putin was scheduled to visit Argentina's massive shale deposit, known as the Vaca Muerta (Dead Cow). The deposit is one of the biggest in the Western hemisphere and could double Argentina's energy output over the next decade. But Buenos Aires has had trouble finding investors to develop the site.

"We're talking about Russia - one of the world's top producers of gas and oil in the world. But we Argentines also have our own and it seems like others have noticed," Fernandez said.

Meanwhile, Putin praised Buenos Aires as a key partner of Russia in the region.

"Argentina is one of Russia's top strategic partners in Latin America," the Russian president said. "We cooperate in vast sectors and I'm in constant contact with the president."

"We also have similar positions in the international arena," he continued.

Argentina abstained from a March UN vote that called for member states not to recognize Russia's annexation of the Crimean peninsula from Ukraine. In the 1980s, Argentina sought to annex the Falkland Islands from Great Britain.

So far, Putin has visited Cuba and Nicaragua during his Latin America tour. He's scheduled to head next to Brazil, where he will hold bilateral talks with Brasilia and attend a BRICS summit - Brazil, Russia, India, China and South Africa.

The Russian president is also scheduled to attend the World Cup final between Germany and Argentina on Sunday. Although Ukrainian President Petro Poroshenko also planned to attend the match, he has cancelled the trip do to the crisis in his country.

Russia will host the World Cup in 2018. Sports Minister Vitaly Mutko said on Saturday that the conflict in Ukraine would not affect preparations. The World Cup host city is Rostov-on-Don, located about 160 kilometers (100 miles) from the conflict region of Donetsk.