North Korean dictator Kim Jong Un has received a medal from Russia for his efforts at preserving the memory of Soviet soldiers who died in the Asian country. Neither Kim nor Russia's Vladimir Putin attended the event. 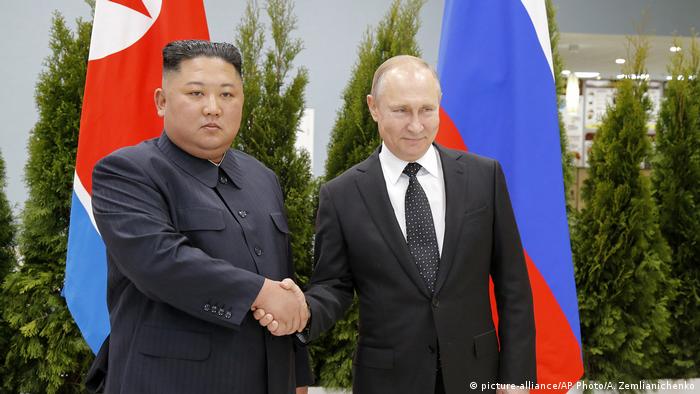 Russia's President Vladimir Putin awarded North Korea's Kim Jong Un a medal over Kim's "great personal effort to preserve the memory of Soviet citizens" who lost their lives in the country, the Russian embassy in Pyongyang said on Tuesday.

The people visible in the photos are wearing face masks, even though the country has not officially reported a single case of the new coronavirus infection. 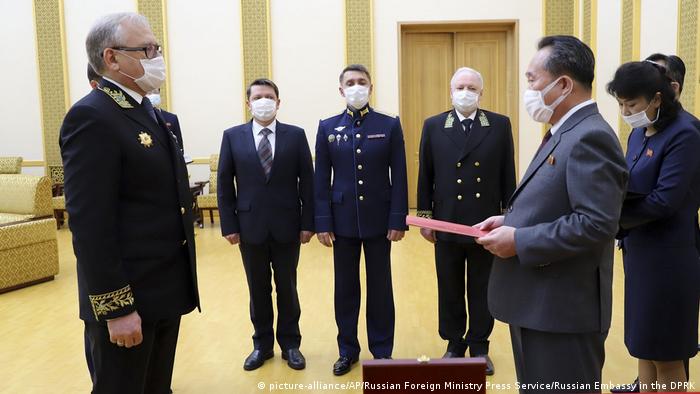 North Korea is one of very few countries to claim no coronavirus cases to date, despite its border with China

Soviet troops helped drive Japanese forces out of the Korean peninsula in the final stages of WWII. The Soviet Union also played the main role in installing Kim Jong Un's grandfather, Kim Il Sung, as the first leader of the nascent Communist state in 1948. Alongside China, it supported North Korea during the 1950s Korean War, which never officially ended despite the 1953 armistice.

The memory of WWII is a source of enormous patriotic pride in Russia with the conflict known as the Great Patriotic War. In recent years, Moscow balked at former Eastern Bloc countries denouncing the Red Army as an occupying force and dismantling Cold War-era monuments to Soviet soldiers and generals.

The medal intended for Kim Jong Un marks the 75th anniversary of the victory in WWII, and was presented just days ahead of the May 9th celebration in Moscow. The day is usually marked with a massive parade by the Russian military. Putin had invited Kim to attend the event before it was postponed as a response to the coronavirus pandemic.

According to the embassy statement, the two sides also pledged to continue their efforts to boost cooperation and implement the conclusions adopted by Putin and Kim during their summit in Vladivostok last year.

The removal of a monument to Soviet General Ivan Konev in Prague prompted a diplomatic spat between Russia and the Czech Republic. The Russian Defense Ministry has now asked to have the statue sent to Russia. (10.04.2020)