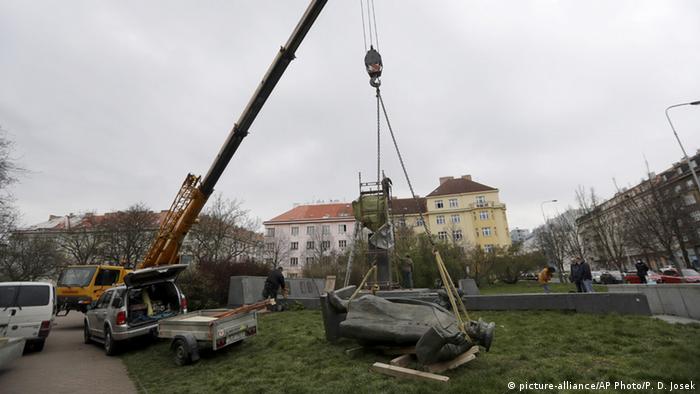 Konev led the Soviet troops who liberated Prague in 1945, but also played a key role in suppressing the Prague Spring in 1968. In the intervening years, he was also part of Moscow's brutal response to the 1956 uprising in Hungary and the construction of the Berlin Wall in 1961. Many Czechs now see him as a symbol of Soviet occupation, while in Russia he is often viewed as a hero due to his WWII record.

On Thursday, Shoigu urged the Czech Defense Ministry to deliver Konev's statue to Moscow, adding that Russia was ready to cover the transport costs. Responding to the appeal on Friday, however, Czech officials said they had no jurisdiction over the statue.

"If the municipality decides to give it to the Russian authorities — that is up to them," a spokeswoman said.

Czech officials previously said the statue would be placed in a museum.

The Kremlin has responded with anger to several Eastern European countries removing symbols of the communist era.

The victory over Nazi Germany, where Soviet troops lost an enormous number of lives and killed far more German troops than any other Allied nation, remains a source of enormous patriotic pride in Russia to this day. The Russian government views the removal of monuments as an attempt to equate Soviet rule with Nazism.

Earlier this week, Russian President Vladimir Putin signed a law that made damaging such monuments punishable by up to five years in prison.

On Friday, Russian federal investigators launched an official inquiry into the removal of the statue in Prague, a largely symbolic effort as the incident took place outside Russia's territory.

Separately, a spokesman for Putin said that residents of Czech Republic should be grateful to Konev.

Spokesman Dmitry Peskov said the Kremlin would prefer to see the monument erected once again "either on Czech soil, and we believe people living there should be grateful to this man, or on Russian teritory if necessary."