Putin and Parkinson′s: What experts say about his health | Science | In-depth reporting on science and technology | DW | 28.04.2022

Putin and Parkinson's: What experts say about his health

A video released by the Kremlin last weekend shows Putin in seemingly bad health. Some commentators and tabloids claim he has Parkinson's. What do doctors think? 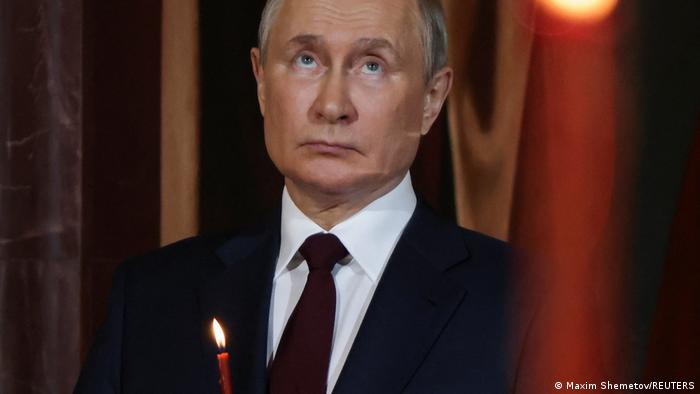 From US Senator Marco Rubio to political science university professors to the UK tabloids, many people appear to have an intimate understanding of Russian President Vladimir Putin's health.

But one important voice has been missing from the flurry of articles and discourse speculating that Putin, who is leading the Russian invasion of Ukraine, has Parkinson's or thyroid cancer: Medical experts.

Putin was shown tightly gripping a table during a 12-minute video clip of a meeting with Russian defense minister Sergei Shoigu. He tapped his foot and slouched throughout the course of the clip, which was released by the Russian government late last week. His face was noticeably bloated.

The video prompted some online commentators, including former UK Conservative Party parliamentarian Louise Mensch, to draw the conclusion on Twitter that the Russian president has Parkinson's disease.

The claim has also been reported by a number of UK tabloids. The stories featured comments from a professor of strategic communications, a couple of political analysts and a professor of body language. But no doctors.

No diagnoses without examinations

That's probably not a coincidence.

"Real neurologists are unlikely to comment because they are taught never to comment on people who are not their patients," John Hardy, a neurogeneticist at the UK Dementia Research Institute, told DW.

Stressing the fact that he's a neurogeneticist, not a neurologist, Hardy shared his opinion on Putin's condition as someone who has studied brain diseases.

"No sign of parkinsonism in my view," he said. "He did not look well…but not Parkinson's disease."

Ray Chadhuri, a neurologist at the University of London, agreed.

"Looking at the short clip, I can find no evidence that I can tell of parkinsonism in Putin," Chadhuri told DW.

Parkinson's disease and parkinsonism are incredibly difficult to diagnose and can only be determined by thorough neurological examination in person, Chadhuri explained.

"Bloating of [the] face or tremors can be caused by many reasons and I did not see any tremor either," said Chadhuri.

Caroline Rassell, chief executive of Parkinson's UK, echoed Hardy when asked for an expert opinion on the clips. She said Parkinson's is a complex condition with over 40 symptoms ranging from physical to mental, and it is therefore impossible to diagnose via a 12-minute video clip.

"It affects everyone differently," said Rassell. "With no definitive diagnostic test, it's something that can only be confirmed after examination by a neurologist or specialist. Media and online speculation is unhelpful."

It is not uncommon for people to speculate about the health conditions of the world's most powerful leaders. The media extensively covered former US President Donald Trump testing positive for COVID in 2020, former German chancellor Angela Merkel's shaking episodes in 2019, and Pope Francis's colon surgery last summer.

For years, the Kremlin has kept tight-lipped about the state of Putin's health, prompting journalists and political scientists to analyze the president's every move in attempts to detect any sign of frailty or illness. Rumors claiming Putin has thyroid cancer, serious back problems and even psychosis have become part of the regular discourse surrounding the president.

This was compounded during the COVID-19 pandemic, when Putin went into full isolation, refusing to come near other world leaders at world summits and conferences and requiring those he met with to isolate and test themselves repeatedly before seeing him.

Russia's Putin-directed invasion of Ukraine in February saw media outlets and analysts speculate that with Putin in isolation and most intelligence coming from a select few people who may or may not have been telling the full truth, the president could have plunged into a state of narcissistic psychosis.

Journalists seemed to latch onto this idea as a way to explain Russia's unprovoked invasion of Ukraine, which has left at least 1,800 Ukranian people dead and thousands injured.

Whether Putin is on his death bed and is using this war as a way to cement his mark on history, or whether he's truly being guided by a kind of psychosis — without any information from the Kremlin, it's all speculation.

And at the end of the day, no one — neither the Twitter commentators, the neurologists watching Kremlin-released video clips, nor the so-called Russia experts — knows what's happening in Putin's brain.