Help, my child is a narcissist!

They continually want to be the center of attention, they have an excessive sense of self-importance and have to get their way — children too can manifest narcissistic traits. So what can and should parents do? 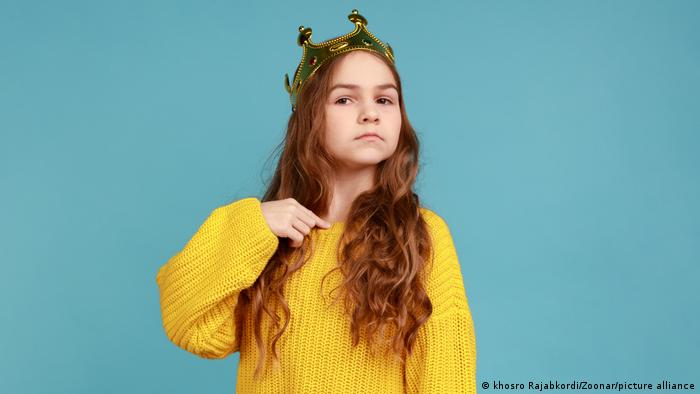 Narcissism doesn't get a good rap. Most of us instantly think of egotistical people who think extremely highly of themselves and are incredibly sensitive to criticism. And they turn nasty, as soon as they are not praised in the manner that they think they deserve.

Yet, from the perspective of developmental psychology, narcissistic phases in a child's life are not just normal, but, in fact, crucial for the development of a stable personality. This normal or healthy narcissism helps us to " develop future scenarios, to believe in themselves and their own value and to [achieve] autarky, that is the ability to develop their own plans and implement them," psychiatrists Michael Lipp and Anne Karow write in a journal article about narcissism in childhood and adolescence.

That is one reason why specialists are very careful about diagnosing children or young people as narcissists. The beginning of personality disorders are located in early childhood and manifest themselves during the process of growing up. But the diagnosis is often not made until a person has reached adulthood.

How does narcissism manifest itself in children?

Nonetheless, it is important to recognize exaggerated narcissistic tendencies in your own child and not just because it can be extremely tiring for parents, teachers and others of the same age, if your offspring is constantly manifesting megalomanic and attention-seeking tendencies.

"Being narcissistic doesn't make you happy," says Eddie Brummelman. He is a developmental psychologist at the University of Amsterdam, researching how children's self-perception develops. Anyone doing research in this field is bound to come across Brummelman's work.

"Narcissists constantly ask themselves 'What do people think of me?' Their self-esteem fluctuates wildly because they are dependent upon approval from external sources and they constantly need to make out that they are something special," he says. For parents, it's extremely important to realize that this puts their children under an enormous amount of stress.

There is also a direct link between narcissism and aggressive behavior, as a meta analysis by Sophie Kjaervik and Brad Bushman from Ohio State University has shown. That is why it is important to explore possible reasons for the child's narcissistic behavior at an early stage. Just like other personality disorders, narcissistic traits are at least partly genetic, Eddie Brummelman stresses.

They can, however, stem from certain methods of raising a child. In 2015, Brummelman conducted a study with 565 children and their parents. The developmental psychologist and his team were investigating two alternative theses about the origin of narcissism.

"These parents perceive their child as being more talented, intelligent and capable than other children, " says Brummelman. That sets the bar for the child correspondingly high. Brummelman sees another problem there: "The love for your own child is attached to conditions. If the child doesn't manage to meet parental expectations, they will come to fear that their parents will be disappointed or even ashamed of their child."

A child that is continually overrated or forced to particularly shine, receives three fundamental messages, according to the developmental psychologist: I am better than others. It is important that I stand out from the rest. I am not valued for the person that I am, but for my achievements.

The resulting narcissistic personality does not develop a stable sense of self-esteem. In fact, it's just the opposite.

Of course, all parents think their children are particularly special — and that's quite OK! "Unconditional warmth and parental affection are important for a stable sense of self," says Brummelman. There is also nothing to be said against praise — if the feedback is somewhat realistic.

Rather than continually comparing the performance of your own child with that of others, the parents should preferably focus on their child's own progress — along the lines of: Look, you weren't able to do that last year and now you can!

Renate Schepker shares that view. She's on the board of  The German Association for Child and Adolescent Psychiatry, Psychosomatics and Psychotherapy (DGKJP) and has come across children and adolescents with exaggerated narcissistic behavior from her work in a psychiatric clinic. "Parents can be proud and also express their pride when their child has achieved or learned something new."

She says it becomes problematic when parents have expectations of their children that are not appropriate for their stage of development and fail to set limits. "A certain openness when it comes to conflict is part of a good upbringing," says Schepker. "Children have to be able to stand it, if their parents occasionally have a bad day or tell their children 'I find your behavior insufferable today'." By the same token, children also have to be able to tell their parents that as well she says.

Therapy can help, if the narcissistic behavior of your child leads to problems in school or with friends because they think that social rules and requirements might apply to others, but not to them. Schepker says that a parental counseling session is an integral part of a course of therapy for a child. The specialist says that it frequently reveals that the parents themselves need therapeutic support.

"Issues from their own childhood often surface during conflicts with their children — issues that have remained unresolved," says Renate Schepker. She says it's more common than one would think.