Unbearable: Living with a narcissist | Science| In-depth reporting on science and technology | DW | 13.12.2019

People with narcissistic personality disorders are difficult relationship partners. Even if you feel sympathy toward the troubled soul behind the ego, if you don't want to lose yourself, you'd better leave quickly. 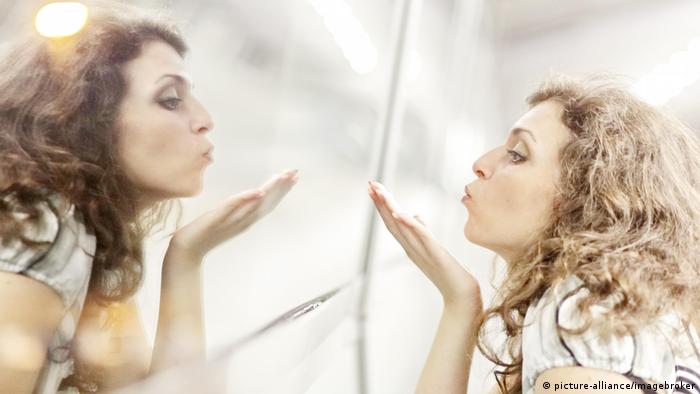 "Honey, just rest, I'm doing the grocery shopping today." That's a sentence Sarah never heard from her partner. Certainly not before she was pregnant with their son, but still not even during her pregnancy, or when the little one was born. Her partner's world revolves around one person: himself.

A few months ago, Sarah ended the relationship. A relationship she now says that she herself probably would have advised every friend of hers to leave long ago. Sarah has been in therapy since the separation. The therapist confirmed her suspicion: she lived with a narcissist for five years.

"Narcissists are characterized by a lack of empathy," says Bärbel Wardetzki. She is a psychotherapist and author of several books on narcissism. Narcissistic people rarely listen, prefer to talk about themselves and have very little tolerance for opposition in conflict situations, says the expert.

That's exactly what Sarah first noticed. "He completely overreacted during small disagreements and said things like 'if you don't let this go now, then we're done' and I found that very strange and inappropriate." If she didn't verbalize her wishes and needs extremely clearly, she would be forgotten.

His self-confidence, his determination and his apparent fearlessness — that's what fascinated Sarah at first. He impressed her. Admiration is the life elixir of narcissists.

But it's not easy being the one who denies them admiration! "They can be overly aggressive when someone does something they don't like," says Wardetzki. Narcissists are either admired or intimidated. Instead of respecting and appreciating the people around them, they devalue them.

Despite these typical behaviors, the term narcissist is actually not so easy to define, says Wardetzki. But there's a big difference between being self-assured and being a narcissist.

"People who say 'I like myself' simply have good self-esteem. They also experience self-doubt, but are able to regulate their emotions and to comfort and support themselves. They know their abilities as well as their limits."

Not much behind the ego

Pathological narcissism, on the other hand, stems from extremely low self-esteem, according to the psychotherapist. Deep self-doubt must be "compensated by the creation of an oversized self."

As is so often the case, this behavior starts in childhood. Narcissists are "emotionally neglected children," as Wardetzki says.

Some children can't even draw a simple line on a sheet of paper without their parents showering them with enthusiasm. On the flipside, some children are consistently put down.

The result is the same. Those who are constantly put on a pedestal and those that are persistently degraded don't feel seen or mirrored. A child who grows up in this way does not develop a healthy sense of self.

Sarah says her ex-partner's mother was "ice-cold, without emotions". As a child, her ex-partner was abandoned at a young age and was raised by his aunt. "His aunt was not a good person, she abused him a lot." He never met his father.

A narcissist for me?

Sarah describes herself as a "caring person" who always wants to help and fix things for others. Her partner was her project. Someone she wanted to help overcome a difficult childhood and show what real love is.

"I imagined that if I could just keep up long enough, he'd realize that I was the right person for him," Sarah said.

That backfired. His refusal to meet her needs came to a head during pregnancy. "He didn't understand when I wasn't feeling well, and he didn't show any interest at all. I had the impression that it was just annoying and stressful for him".

As an expectant mother, she asked for more support. But it was in vain. So got angry. That's when he would react. "You always yell at me, so don't be surprised if I don't treat you well" was a common response.

"Because I didn't give him the recognition he thought he deserved, he also had affairs all the time," Sarah says. If one of his lies was uncovered, he denied everything and declared Sarah was crazy.

Dealing with narcissists takes a toll on one's self-esteem, says Bärbel Wardetzki. "In no time at all, they make you feel worthless and pitiful and no longer like the person you thought you were. It's important to take a stand and to not be intimidated."

By initiating a separation, Sarah decided to stand up for herself, and thus deprived the narcissistic man of his most reliable source of admiration.

"He doesn't think I mean it," Sarah says. Now he often embraces her and tells her that she and their little family are exactly what he needs. "I believe he needs it. But it'll never be enough, he isn't satisfied with what he has."

People with a narcissistic personality disorder are like a bottomless pit, says Wardetzki. "They don't have an inner understanding of their worth, and constantly seek external validation."

An extremely low self esteem demands endless recognition and admiration.

"He needs those women who love him. That doesn't change just because he realizes that he wants to have his family after all. The problem remains the same."

The number of people suffering from anxiety disorders has increased by 15 percent since 2005. What are the symptoms and what can be done about this mental illness? (18.04.2019)