Infidelity: A fling doesn′t have to end everything | Science| In-depth reporting on science and technology | DW | 07.11.2019

Infidelity: A fling doesn't have to end everything

A partner's betrayal, whether it's a one-time hook-up or a full-blown affair, is devastating. Does it mean the end of the relationship, though? Not necessarily. It can also serve as a wake-up call — to be better. 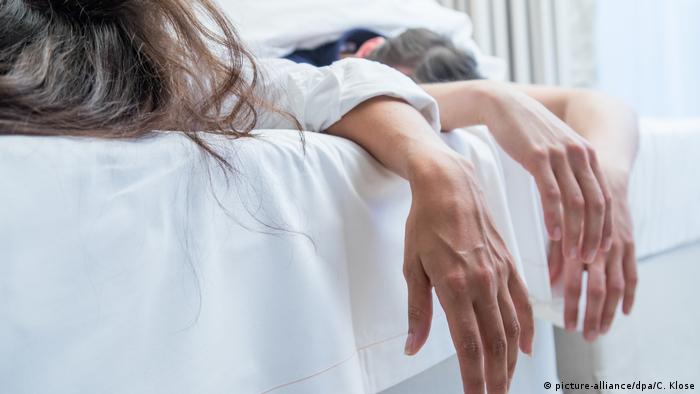 Whenever Stephan used to travel, Maria couldn't sleep. The fear that her boyfriend might end up in some other woman's bed kept her awake at night.

For many couples, the story ends there. Such a betrayal often feels too big, too destructive. The relationship is over.

Maria and Stephan, on the other hand, are still together.

Not only that: Twelve years later, they have two children. And Maria says the whole episode even strengthened their trust in their own relationship.

Kristin Gilbert, a psychologist and psychotherapist, has a professional interest in the factors that motivate people to have a fling with someone else. More than ten years ago, she, together with colleagues at the Technical University Braunschweig, looked into exactly which circumstances contribute to cheating. Using the data collected in the study, the scientists developed a therapy specifically for couples whose relationship has been upset by infidelity.

Gilbert's conclusion: "We are all potential cheaters. At least when certain risk factors come together."

People like Stephan, who likes to travel, knows many people and loves parties, have many more opportunities to have sex as opposed to those who rarely leave their own little microcosm. 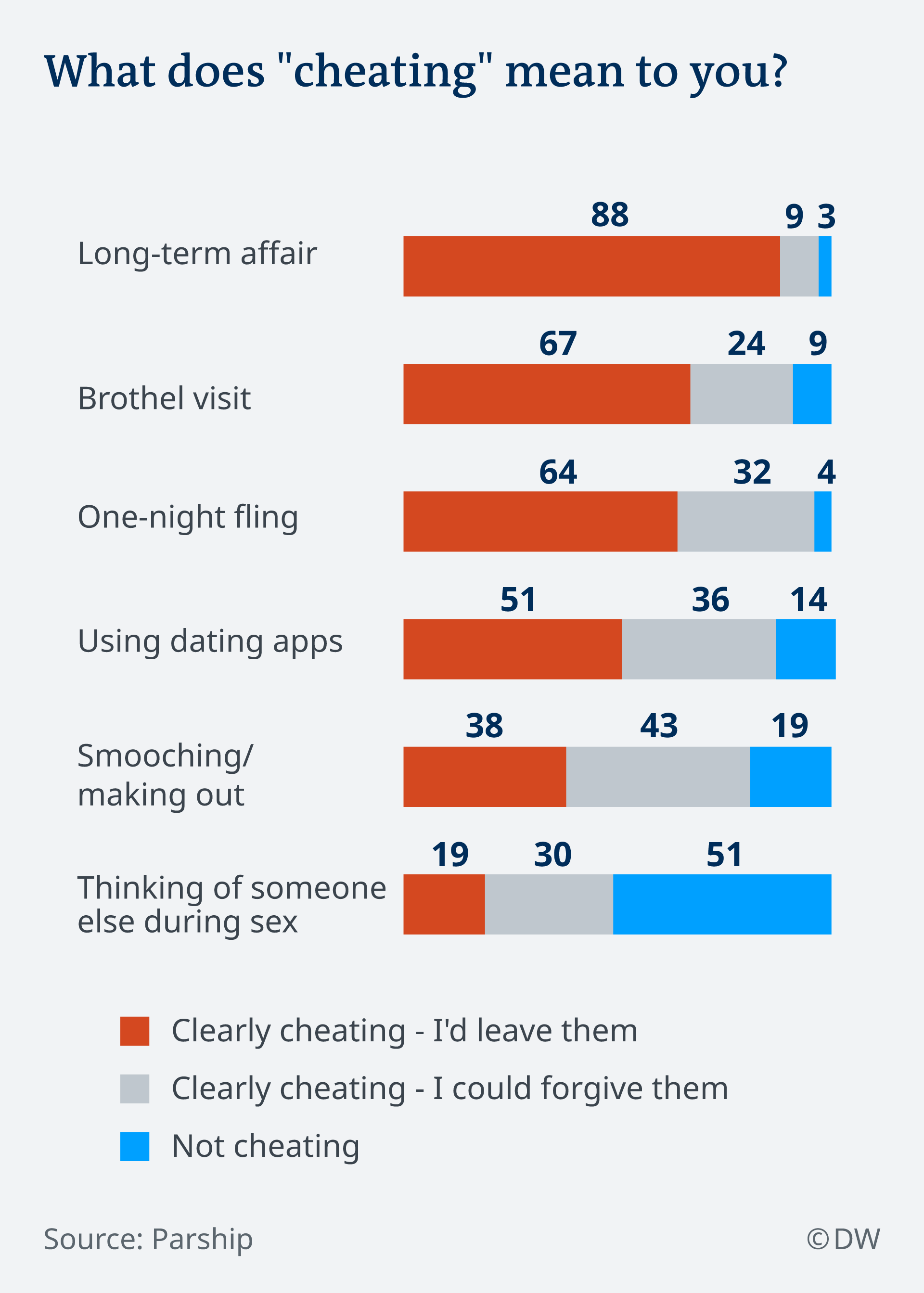 Opportunities alone, of course, do not automatically trigger infidelity, though.

"Often, the partnership, and especially the sexual satisfaction, was low," Gilbert says of the people surveyed at that time.

As satisfaction decreases over the duration of the relationship, the willingness to cheat increases. Here, the psychologist speaks of "partnership risk factors."

Children, she says, usually increase this risk. Stephan cheated with Maria just a few months after the birth of her first child. "He was at the bottom of my list of priorities," she explains of the situation at that time.

Still, Maria seems to have completely overcome an experience that might have traumatized other women for the rest of their lives.

The question is: How?

With the help of the therapists, Maria and Stephan looked at patterns that had a decisive influence on their behavior as a couple.

This is what Kristin Gilbert summarizes under "individual risk factors."

"An important point is the concept of loyalty," she says. "The more liberal my attitude toward monogamy and loyalty is, the higher the probability that I will be unfaithful."

Another important motive for the cheaters interviewed by the scientists was their desire for freedom and autonomy.

This also applies to Stephan: During therapy, he realized that as soon as he saw his freedom in danger, he destroyed things — repeatedly — that were important to him.

In the end, he not only harmed others, but himself.

Perpetrator and victim - who's who?

Of course, the one who deceives is the perpetrator, and the one who is being deceived is the victim. That, at least, is the overriding consensus in society.

Maria also felt this way. And she wasn't wrong. But it's not the whole truth, either.

Psychologist and couples therapist Hans-Georg Lauer says "infidelity does not mean the end of a relationship."

To understand why, he says, "two levels" have to be distinguished.

First: The person who cheats becomes, of course, the perpetrator. That much is clear. Nor should anyone who engages in such behavior be surprised at the anger and pain they cause in their deceived partner.

That said, both partners, Lauer explains, are involved in relationship dynamics that form the breeding ground upon which infidelity grows. 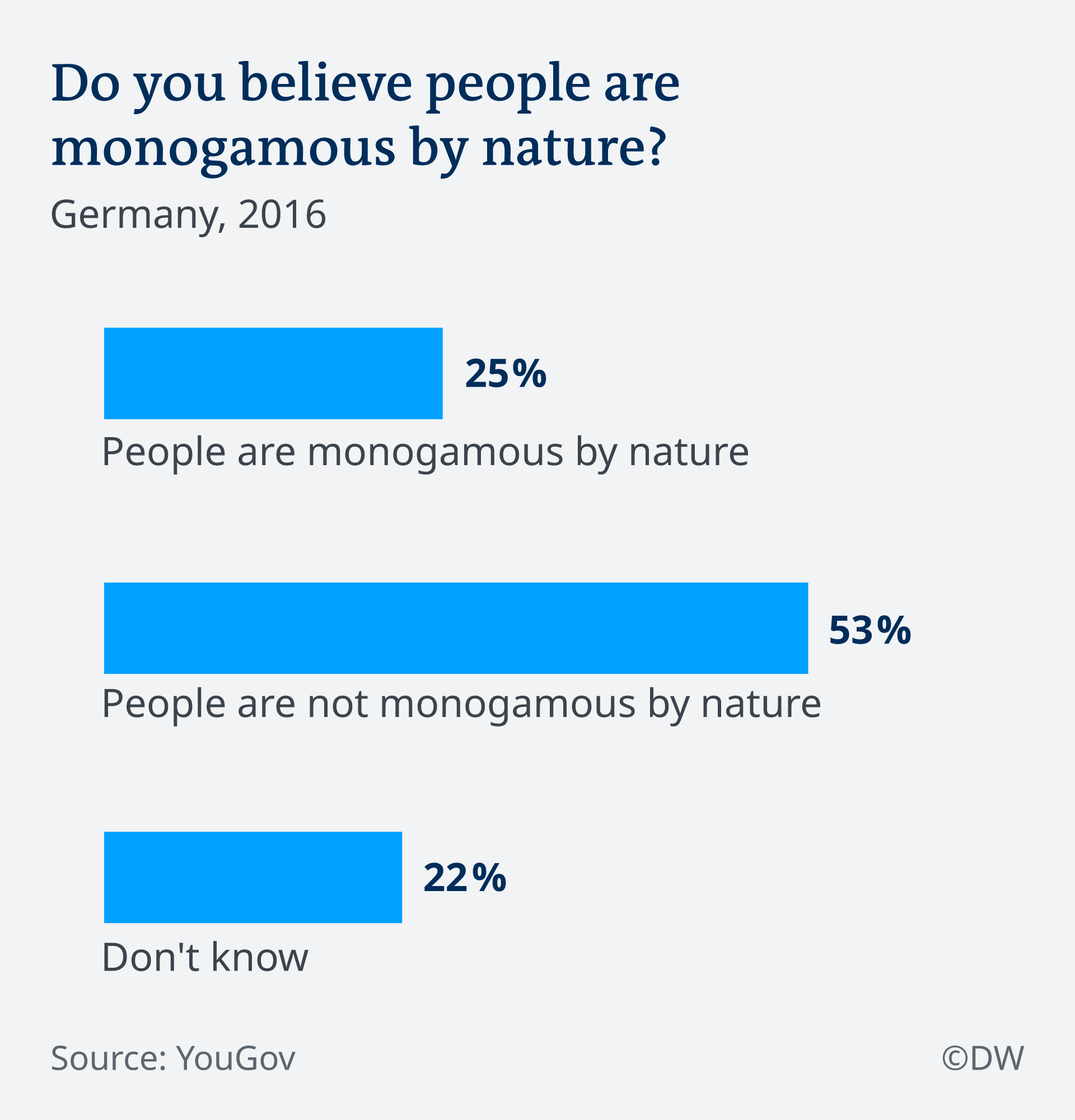 The couple therapist outlines three steps to ensure that the relationship still has a chance after the betrayal — and which can help to prevent anger and pain from becoming lifelong companions.

First of all, it is essential to re-establish a minimum of trust.

In his therapy sessions, the cheated are therefore allowed to ask questions. "This strengthens mutual understanding," he explains. And in addition, it helps the couples to able to speak again — a not unimportant prerequisite for a potential restart of the relationship.

With those questions, though, come fresh wounds.

"To make the deception concrete, and to give a name to the unknown, also makes the pain really noticeable," he says. "Step one: Enduring questions. Step two: Enduring pain."

Third, it's important to be aware that there are no quick-fix answers.

"Some couples tend to go straight back into their daily agenda," he says. To them, it seems easier to quickly accept what has happened than to become fully aware of the consequences of the problem and to endure the uncertainty.

"But," he says, "that usually backfires."

Read more: Why can't we tickle ourselves? 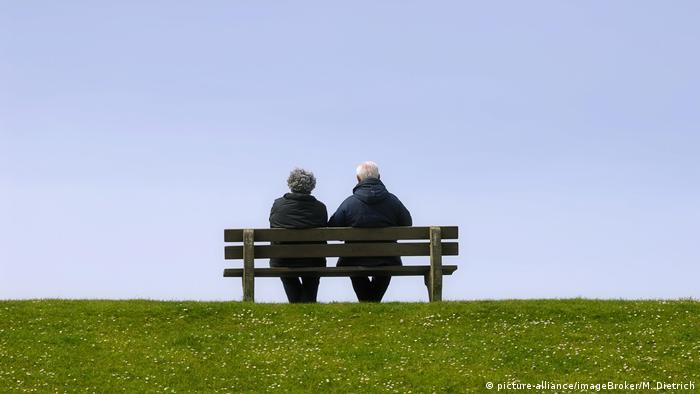 Surviving a crisis can mean a quantum leap for a couple

Maria can confirm that it is, indeed, worthwhile to take a look at the personal patterns of the two partners. After all, where there's personal responsibility, there's also room to maneuver. "It made me feel totally relieved to realize that I'm not just a victim," she says.

Back when she, herself, was single, she often found herself in the role of the "other woman" in the lives of the men she fell for — the "secret lover" in a three-way constellation.

What doesn't kill you makes you strong

In therapies, the — often unconscious — ideologies that determine the path our lives take are often revealed. Maria believed, for example, that she "wasn't worth someone committing to entirely."

When Stephen cheated on her, she saw her worthlessness confirmed.

But Stephen stayed. Although he was strongly drawn to the other woman, he decided to break through his own patterns of behavior and continue the relationship with Maria. "To experience that we managed to get through this crisis, that relaxed me a lot," Maria says.

Lauer adds that "a couple who are going through a crisis together can make a quantum leap." This applies as well, he says, to Maria and Stephen. For them, the issue of further "escapades" is no longer a specter that haunts them. And it isn't just because Maria has forgiven her husband, or that both of them are more aware of their patterns of action than before the deception.

She survived, and she says that now, her relationship had become stronger and more honest. "I always thought that if he cheated, I couldn't bear it. That it would kill me."

Today, when Maria speaks of one of the most difficult times of her life, she sounds grateful that it all happened the way it did.