A Russian court has confirmed jail sentences against two members of the punk band Pussy Riot. A third had her sentence suspended. Observers say the trial confirms the downward spiral of Russian human rights. 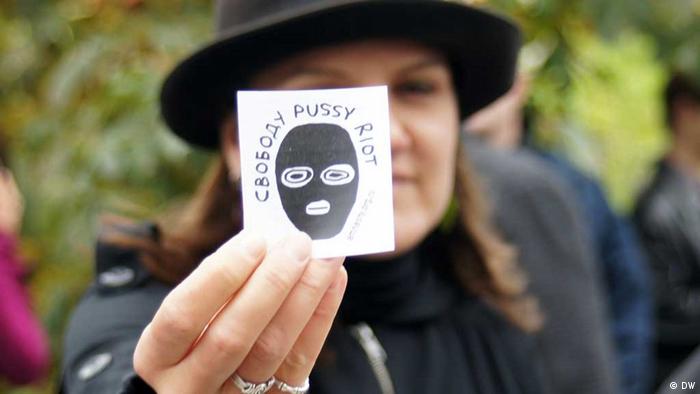 One of the members of the punk band Pussy Riot has been unexpectedly released on appeal, after a Moscow court converted a two-year jail term against Yekaterina Samutsevich into a suspended sentence on Wednesday (10.10.2012).

The judges said Samutsevich had been thrown out of the Cathedral of Christ the Savior before she was able to take part in the activities over which she was charged. The court confirmed the two-year sentences imposed on the other two members of the band, Nadezhda Tolokonnikova and Maria Alyokhina. 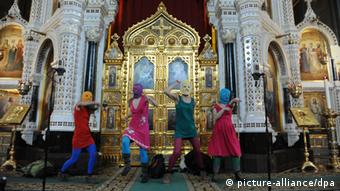 The three women took part in a so-called "punk prayer" in the cathedral in February to protest against Vladimir Putin, who was then standing for president, and against the links between state and church in Russia.

In August they were sentenced to two years in a labor camp for inciting religious hatred.

A reaction to public pressure?

Lev Ponomaryov, head of the Russian organization For Human Rights, said the way the court proceedings had gone was "detestable." Public opposition to the imprisonment had been strong, and even the Orthodox Church had called for milder sentences.

"The authorities only want to show they are responding to the public by letting one of the girls go free," he said.

He pointed out that, from the start, there had been good legal justification for not including Samutsevich in the original trial, "but Samutsevich originally showed solidarity with the other two. That's what she wanted." Perhaps, he added, she'd changed her mind under the influence of relatives, friends or the authorities. 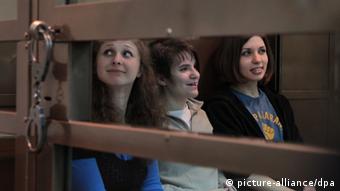 The human rights activist Soja Svetova, who visited the band members repeatedly in prison, described the latest judgment as "very strange." The court said Samutsevich's lawyer was able to show that she was not involved in the protest. But it had been made clear in the earlier hearings that she had not even managed to touch a guitar in the cathedral.

Svetova noted that the other two members of the band had made virulent anti-Putin speeches in court during the appeal trial, while Samutsevich had kept quiet.

"Perhaps that played a role in her getting a suspended sentence," she said - in political cases, it not the court that decides, but the Russian state.

In Germany, the Green party's spokesperson on Eastern Europe, Marieluise Beck, and its spokesperson on human rights, Volker Beck, both welcomed the release of Samutsevich but described the judgment against the other two as "all the more brutal."

Russian justice had shown itself once more to be an accessory to the Kremlin, they said. Only a few days ago, President Putin had justified the tough line against the band.

"Now a higher court has confirmed a verdict against Maria Alyokhina and Nadezhda Tolokonnikova which offends the principles of human rights," they said. "Young women who are the mothers of small children will now be imprisoned for two years; the fight for their release must continue."

'Dare to take a clear look at Putin's Russia' 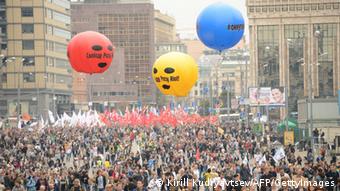 Russia has made it harder for people to show their disapproval

The two also noted that the latest judgment confirmed how Russia was moving away from the legal standards to which it is committed as a member of the Council of Europe.

"The tightening of the law on assembly, the defamation of political NGOs which have to describe themselves as 'foreign agents' if they accept support from abroad and the increasing control of the Internet are only the latest steps in this downward spiral," they said.

They saw the need for a new German and European policy towards Russia.

"In its current state and with its current government, the country is no longer a strategic partner," they added. They called on the German government "to meet the challenge and dare to take a clear look at Putin's Russia."

The two-year prison sentence for Russian punk band Pussy Riot has drawn worldwide condemnation. Politicians and human rights activists see the verdict as being politically motivated and way too harsh. (18.08.2012)