A land-use disagreement sparked the violent clashes between residents and authorities in southern China. Hundreds of people protested when plans for a park became plans for a crematorium. 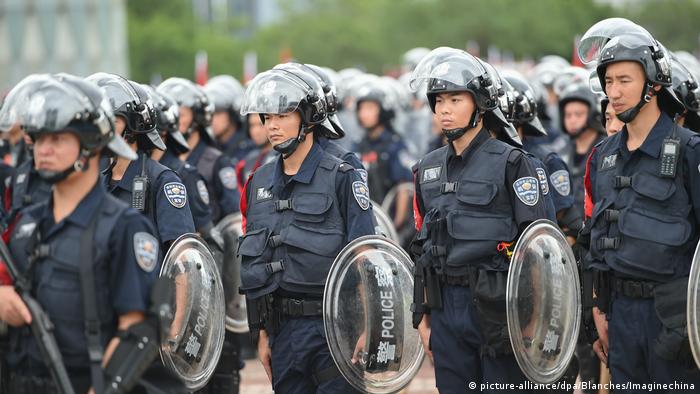 Hundreds of protesters clashed with riot police in southern China on Thursday and Friday over plans to build a crematorium.

The protests took place in Wenlou, in Guandong province, about 100 km (60 miles) from Hong Kong, according to the South China Morning Post (SCMP).

The protests began when residents discovered that land they thought had been allocated for a park would be used for a crematorium instead.

Images and videos of the protests surfaced on Chinese microblogging platform Weibo, showing a heavy police presence and a large number of protesters.

Several Weibo accounts showed photographs of the protests — in one, a female protester is pictured holding up a homemade placard opposing the building of the crematorium.

According to the SCMP, the riot police fired tear gas and beat protesters.

Some teenagers and at least one elderly woman were injured in the protests, witnesses claimed.

Some videos posted on Weibo accounts on Friday were later removed from the site.

The SCMP reported that around 50 people were detained in the protests.

Unrest between the authorities and Chinese people is not uncommon, yet Chinese authorities clamp down hard on protests as well as removing videos, photographs and posts from social media. Often protests are over land disputes as well as other issues such as pollution.

The new legislation requires the State Department to ensure that Hong Kong retains sufficient autonomy to enjoy favorable US trading terms that have helped the city to maintain its position as a major financial hub. (28.11.2019)

Opinion: No sign of political reform in China since 'Charter 08'

It's been ten years since several hundred prominent Chinese intellectuals signed a manifesto calling for democracy and rule of law. But since then, Chinese society has turned more, not less, autocratic, says Perry Link. (10.12.2018)