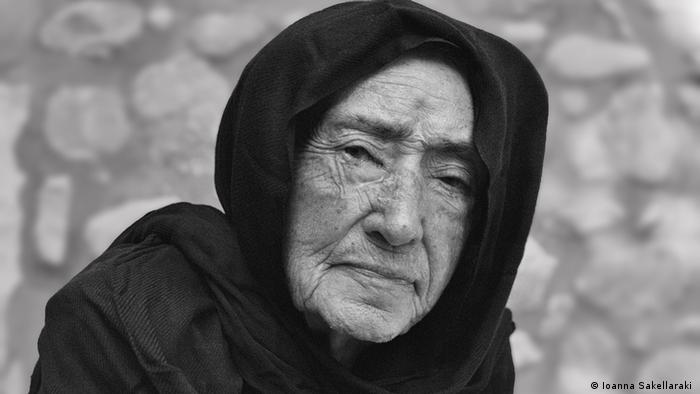 When Brussels-based photographer Ioanna Sakellaraki's father died four years ago, she returned to her native Greece to process the loss and spend time with her mother. In trying to understand her own grief, she began to explore traditional rituals around death in Greek culture. 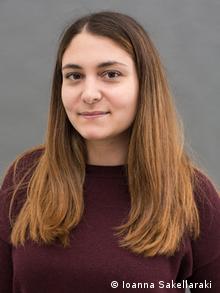 She learned about a group of elderly women still practicing an ancient tradition in remote villages in the Peloponnese region — that of a professional mourner.

The women, called moirologists — moíra meaning fate and lógos, speech — are hired to sing and grieve at the funerals, ushering families through the complex post-death rituals of traditional Greek culture, as those before them have been doing for centuries.

Intrigued, the 30-year-old landed a grant by London's Royal Photographic Society and traveled to remote villages to find them and learn about their trade.

Her project, The Truth is in the Soil, explores "fabrications of grief" inspired by the lives of roughly a dozen moirologists called to mourn a person they know or have perhaps never met as part of their moral duty.

In October, the photographer and mixed-media artist had a solo show in Berlin as part of the European Month of Photography.

The historical tradition of 'fate' songs

The professional mourners of the Mani peninsula see their work as helping the family grieve and accompanying the deceased in their journey to the afterlife. The laments they sing are called "fate" songs, the photographer and philosophy PhD candidate told DW. "They are from a kind of historical tradition, an oral improvisation." 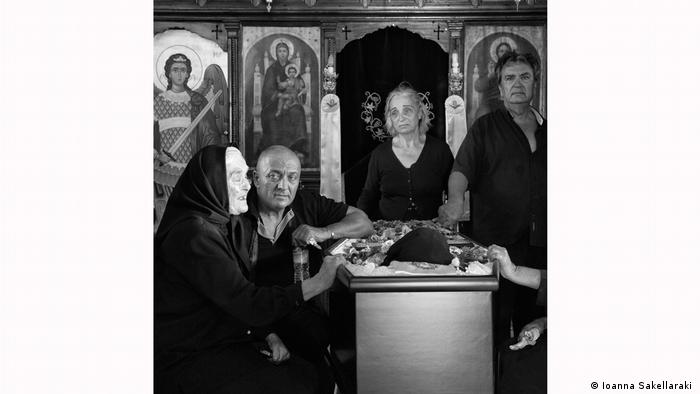 The songs retell the story of a grieving person's life in quick-witted improvisations. Historically, says Sakellaraki, "families were asking for women to do this process because it was just so important — it was an important sort of collective goodbye to the person."

November 15 is National Day of Mourning in Germany, and the topic of death is on the minds of collective society more than usual as the COVID-19 pandemic has caused 1.2 million fatalities worldwide. Exploring the role of rituals in the grieving process is perhaps more relevant than ever.

Professional mourners around the globe

Moirology dates back to the choirs of ancient Greek tragedies where the principal singer would begin mourning and the chorus would join in. Over the centuries, the profession became exclusive to women.

Evidence of professional funeral singers can be found in Ancient Egypt as well, where two women playing the roles of the goddess sisters Isis and Nephtys helped prepare the dead. 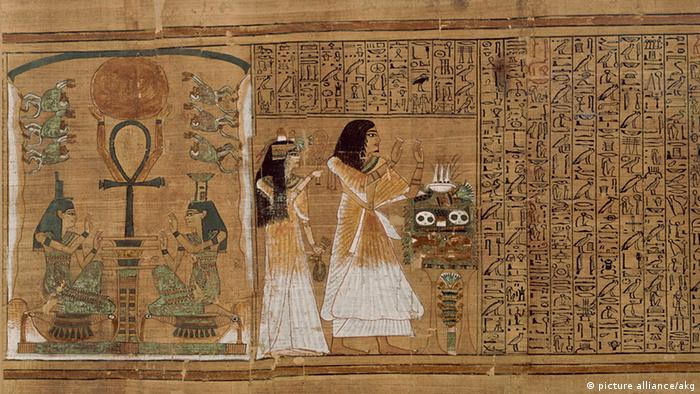 In Ancient Egypt, women dressed like goddesses Isis and Nephtys (left) were part of the funerary rituals

Professional mourners, singers or otherwise, still exist around the world today, their job varying depending on the cultural context. They are essentially storytellers who weave bits and pieces together from the fabric of a person's life.

In Germany, professional funerary speakers called Trauerredner are hired to read eulogies at funerals, despite not knowing the deceased personally.

In India, a more exploitative tradition exists in Rajasthan, where women from low castes work as professional mourners for wealthy men, expressing grief that is not socially acceptable for family members to show. 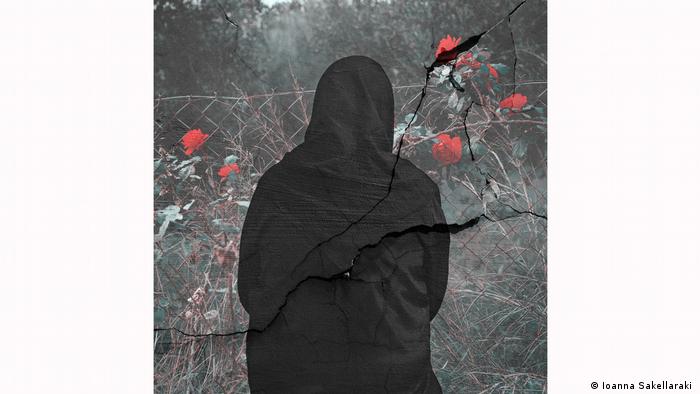 Another work from Sakellaraki's series, 'The Truth is in the Soil'

It's OK to cry

China has a particularly long history of professional mourning, dating back to the Han dynasty. The profession has experienced a cultural resurgence in recent years — it was banned during the cultural revolution. Today's professional mourners in China go sometimes to extremes with emotional tributes to the deceased followed by extravagant performances, sometimes including belly dancing to lighten up the mood. AnNPR story following one of the country's top mourners, Hu Xinglian, detailed one such event. "Some people can't cry. So I use my heart to sing this song to represent the loss of the younger generation," said Hu Xinglian.

Theatrics as a means to release emotion is also present in the Greek tradition.

The mourners of Mani, although not rolling on the floor in tears like their Chinese counterparts, dress in black, often wearing intricate embroidered veils, lending them a sculptural, theatrical air. 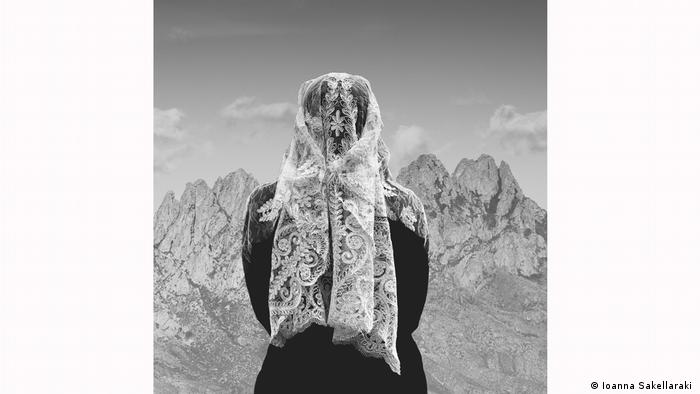 A mourner from the Mani peninsula in Greece

"It's this idea of bodies and emotions coming together to perform death," says Sakellaraki. "These women become almost agents of death within these communities; they have to appear and perform a certain way." Their presence and song allows the family members of the deceased to fully let their emotions flow and expose grief, instead of keeping it inside. "We say this idea of exposure, of the catharsis in Greek culture comes from the process of the ritual," adds the photographer.

A tradition around death that's dying out

If rituals around loss and grief are important for a process of mourning, social distancing measures, although necessary, challenge this process amidst the pandemic, with many funerals not being held as they would have in pre-pandemic times. 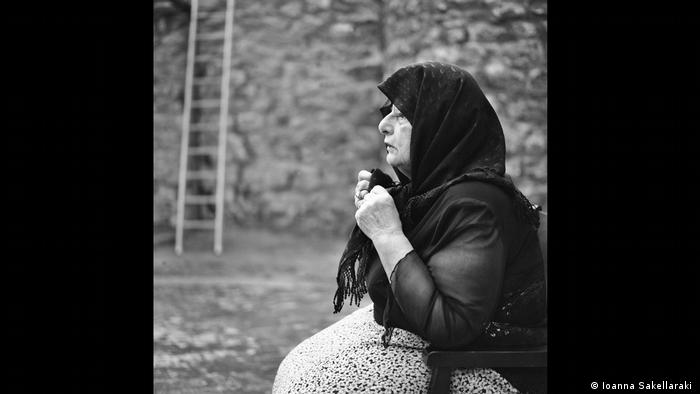 Sakellaraki documented the lives of roughly 12 professional mourners in Greece

Yet coronavirus or not, the moirology tradition on the Mani peninsula is dying out.

Many of the older women Sakellaraki photographed are nearly 100 years old, with no one from the younger generation to take their place. Few of the songs they sing have even been notated.

Correction: This article was revised on December 8 to more accurately reflect that the mourners of Mani also do their work out of a sense of duty and moral obligation.

The 14th Documenta art show is opening in Athens instead of Kassel, Germany. New Greek Minister of Culture Lydia Koniordou explains how the culture scene is surviving and what the world can learn from Greece.