A white stork in search of love has caused chaos in a town in Brandenburg every summer for four years. Will Ronny, as he is affectionately known, find love in the summer of 2019? 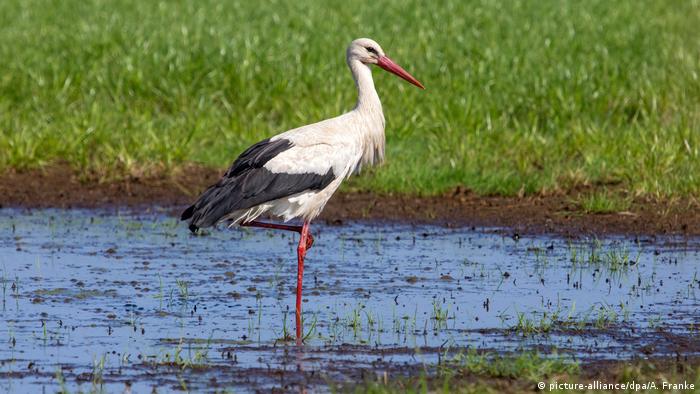 A so-called "problem stork" named Ronny with a reputation for wreaking havoc has returned to the German town of Glambeck in Brandenburg state for his fourth summer there, local media reported.

He spent his first few days in Glambeck attending to his nest, searching for food and getting reacquainted with his summer home.

"He landed a week ago. He can be recognized by his ring. He's in top shape and no longer limps," the local mayor, Hilde Peltzer-Blasé, told the Märkische Allgemeine newspaper.

Ronny is said to have acquired the limp during a victorious fight with a rival stork two years ago.

While the stork has become a familiar face in the Glambeck community, Ronny's presence has not always been welcomed by the locals.

He is known for attacking car roofs and windows with his long pointy beak, prompting residents to keep their cars inside garages and hang sheets in front of windows to try and protect them.

He even had the nerve to take leisurely strolls through front gardens and break into houses through patio windows.

Looking for a lover

His brazen behavior appears to have been an attempt to find a mate. Over the years, Ronny has spent much of his time in Glambeck fighting with two breeding storks, as well as all other "rivals" that he sees in reflective surfaces.

But since Wednesday a female stork companion has joined him in Glambeck, and the mayor thinks this is why Ronny has been better behaved.

"That's why he has become a little calmer. Whether this is his partner from last year, we couldn't find out yet," Peltzer-Blasé told the Märkische Allgemeine.

Storks from eastern Bavaria and Brandenburg cross the Bosporus and follow the Nile valley to reach Sudan, and some continue to Eastern Africa and South Africa, according to the Max Planck Institute, while storks in southwestern Germany migrate as far as Senegal via Spain and Gibraltar.