When Portugal was facing difficult times, the EU imposed tough austerity measures, while China pumped billions into the country. Now Portugal's prime minister is speaking out against a tougher EU course against China. 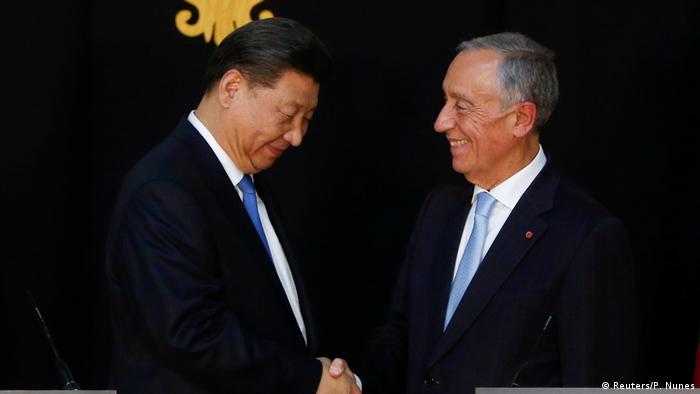 Over the past several years, Portugal's Prime Minister Antonio Costa has emerged as one of the staunchest supporters of Chinese investment in Europe. Recently, Romania — which currently holds the rotating presidency of the Council of the European Union — announced that the EU would in future monitor more closely non-European, particularly Chinese, investments in key European industries.

Chinese companies have pumped billions of euros into Portugal since the country found itself in a debt crisis, beginning in 2010. They have purchased a number of Portuguese firms, including the previously state-owned power grid operator REN, the nation's largest insurance company, private hospitals as well as banks. Critics describe it as a "sellout."

The Chinese also control several small electricity suppliers in Portugal. Most recently, they also wanted to acquire the largest electricity provider, EDP. The takeover attempt hasn't yet succeeded — probably because of concerns expressed by the United States. EDP also has operations in the US.

Due to China's growing economic engagement in Portugal, there is growing concern as to whether Lisbon still remains on the side of the EU when it comes to presenting a united front against Beijing. "Antonio Costa is not the Trojan horse of the Chinese in the EU. He is their war horse," said João Duque, professor at the ISEG business school in Lisbon.

In recent years, Costa has repeatedly positioned himself as a friend and sympathizer of China. Underlining the close bilateral friendship, Chinese President Xi Jinping recently embarked on a state visit to Portugal. Relations between the two countries, which have existed for 500 years, have never been better.

During the debt crisis, Beijing came to Lisbon's rescue. China, for instance, bought Portuguese government bonds, which nobody else wanted to buy at the time.

There was also help from the European side, but Portugal had to comply with the conditions imposed by the "Troika," which included the triumvirate of the European Commission, European Central Bank and International Monetary Fund.

"The troika has literally pushed Portugal into the Chinese arms," complained Portuguese MEP Ana Gomes. At the time, Gomes said, she and many of her colleagues repeatedly warned of the consequences, but the EU kept referring to the freedom of markets. "Now it's paying the price for its mistake," Gomes noted dryly. 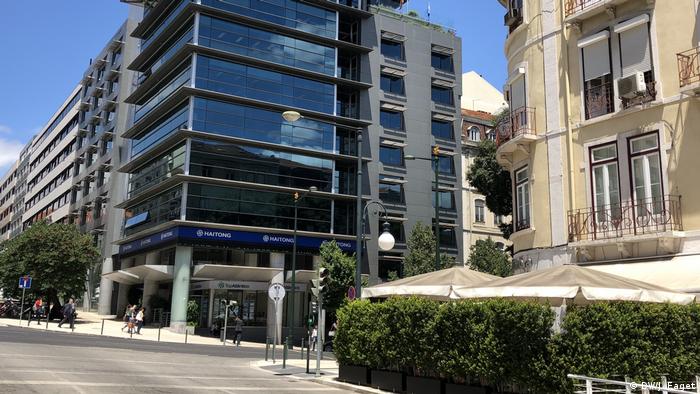 Chinese banks, here the Haitong Bank in the center of Lisbon, are now part of the city landscape

Like Prime Minister Costa, Gomes is a member of the Socialist Party. Nevertheless, the MEP does not agree with the premier's course. China, she said, is a country that disregards human rights and pursues political goals with its European investments. Many Chinese companies are state-owned, she pointed out. Demanding that these Chinese firms are kept out of key industry sectors in Europe is not protectionism, the MEP argued.

"I must therefore vehemently oppose PM Costa when he publicly defends Beijing, even though the EU has so far been unable to act against China."

Ilídio Serodio of the Portuguese-Chinese Chamber of Commerce in Lisbon also admits that Chinese companies want to expand their influence worldwide. They have secured great influence in Europe through their investments in small EU nations such as Portugal and Greece, Serodio said, adding that it has also brought economic advantages to these countries. "Portugal can only benefit from having a good relationship with China," said the businessman, although he also sees problems in strategic areas.

Beijing has been trying for years to gain a foothold in the Portuguese Azores islands, where it has even bought a port next to an American air force base. "The Chinese want their own base in the Atlantic, but this is unlikely to happen," said Serodio.

The US, meanwhile, is presenting more resistance than Portugal itself — similar to the dispute over the participation of the Chinese firm Huawei in the building of the 5G telecom network.

"There is no doubt that the Chinese will continue to invest in small EU countries in a bid to increase their influence," Serodio said. Portugal's PM Costa is aware of this, the expert noted, adding that the premier doesn't see it as a danger, at least for the time being. "Our head of government is very optimistic," Serodio stressed.

Professor Duque, however, disagrees. During the debt crisis, China not only bought up massive amounts of Portuguese national debt but also secured a powerful position by taking over companies, he said. "That's why Portugal can't take any position against China's expansion policy."

Duque also blames the EU for the development. "First the EU forced the country into an unprecedented sellout, now it is complaining about the consequences."

Duque fears the consequences could turn even worse. If the global economy continues to cool down and Portugal gets into difficulties again, China could once again assume the role of savior and secure even more influence for itself, he pointed out. "Perhaps the public intervention of the Portuguese prime minister is the advance payment for the financial injections that will be necessary again later," the economist said.

The EU has every reason to take a critical look at the close relations between Portugal and China, even if it ultimately has to blame itself for the love affair between Lisbon and Beijing, he underlined.

While the troika was determining Portugal's fate, China was buying Portuguese companies. That trend has continued. Is the EU member on the road to economic and political dependence? (01.08.2018)

Heightened security concerns on the continent have been just one reason for a sharp drop in China's investment activities across Europe. A fresh study shows, though, that German firms remain coveted takeover targets. (05.02.2019)