Pope Francis has rejected the resignation of a French cardinal found guilty of covering up the abuse of minors. Philippe Barbarin is one of the highest-ranking officials embroiled in a sexual abuse cover-up. 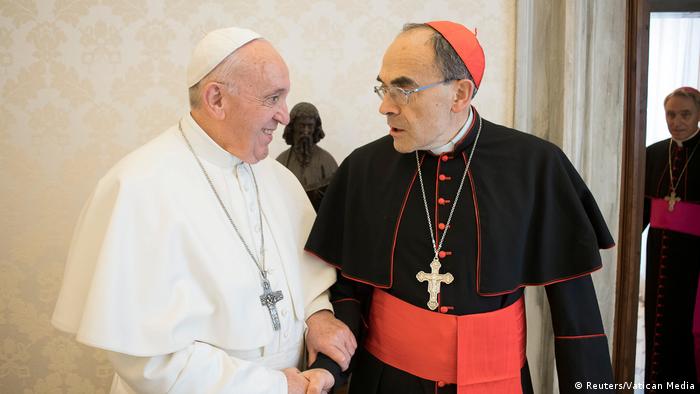 Cardinal Philippe Barbarin of Lyon, one of France's most senior Catholic clergymen, said on Tuesday that the pope rejected his resignation following his conviction in a sex abuse-related case.

Barbarin was sentenced earlier this month to a six-month suspended jail term for covering up the sexual abuse of minors by his subordinates. He denied any wrongdoing and is appealing the conviction.

Pope Francis cited the presumption of innocence for rejecting Barbarin's resignation, according to a statement by the cardinal's diocese in the French city of Lyon.

"Monday morning, I handed over my mission to the Holy Father. He spoke of the presumption of innocence and did not accept this resignation," Barbarin said in a statement.

Barbarin's deputy, the Rev. Yves Baumgarten, would assume leadership of the archdiocese on a temporary basis.

Read more: Vatican promises to crack down on sexual abuse

Catholic priest Bernard Preynat admitted to abusing boy scouts during the 1980s and early '90s. Barbarin and five former aides in Lyon were accused of covering up the abuse. A victims' association bypassed the prosecutor's office and insisted the case go before a court, which is allowed in France. Barbarin and his co-defendants argued they did not know about the abuse until it became public.

In a similar case in Australia last year, the pope accepted the resignation of Adelaide Archbishop Philip Wilson after he was convicted of covering up abuse. Wilson appealed successfully, but had already been replaced by the time he won in court.

A film about the abuse case, "By the Grace of God," won the Grand Jury Prize at the Berlin Film Festival last month.