Pope Francis has arrived in the Paraguayan capital of Asuncion for the last leg of his South America trip, which took him to Bolivia and Ecuador. The pontiff hailed women on the first day of his visit. 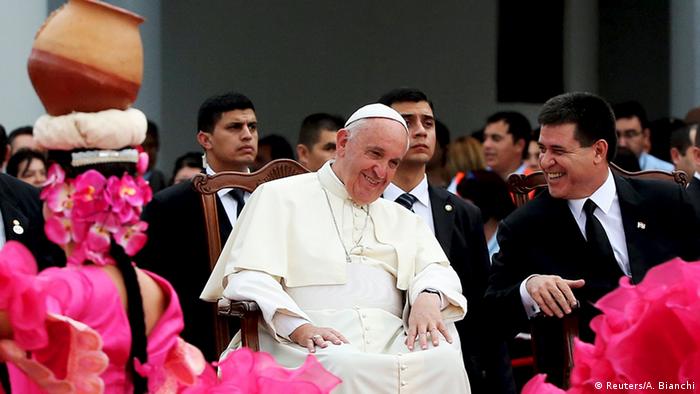 Marking the last leg of his week-long visit to South America, Pope Francis arrived in Paraguay, where he will perform mass twice before returning to the Vatican on Sunday.

During his first hours in the landlocked country, the pontiff hailed Paraguayan women, who he said have "known terrible sufferings."

"From the first days of the country's independence to recent times, Paraguay has known the terrible sufferings brought on by war, fratricidal conflict, lack of freedom and contempt for human rights," Pope Francis said at the presidential palace in the capital Asuncion, after meeting with President Horacio Cartes.

"As mothers, wives and widows, women shouldered the heaviest burdens; but they found a way to move their families and their country forward, instilling in new generations the hope of a better tomorrow," Francis said.

On his first day, the Argentinean pope visited the Casa del Buen Pastor women's prison, where only 107 of the 295 inmates have been formally convicted, according to Germany's DPA news agency. A 50-woman choir sang for the pontiff during his visit to the prison.

In Asuncion, Pope Francis reiterated his calls for "economic progress" based on the "dignity of the human person."

"An economic development which fails to take into account the weakest and underprivileged, is not an authentic development. Economic progress must be measured by the integral dignity of the human person, especially the most vulnerable and helpless," the pontiff said.

Pope Francis is expected to perform mass on Saturday at the Marian Shrine of Caacupe, considered the center of Paraguayan spirituality. On Sunday, he is scheduled to visit the Asuncion slum of Banado Norte before returning to the Vatican.