On a visit to the city of La Paz, Pope Francis has called for dialogue between Chile and Bolivia over a long-running border dispute. His time in the city, among the highest on Earth, was limited on medical grounds. 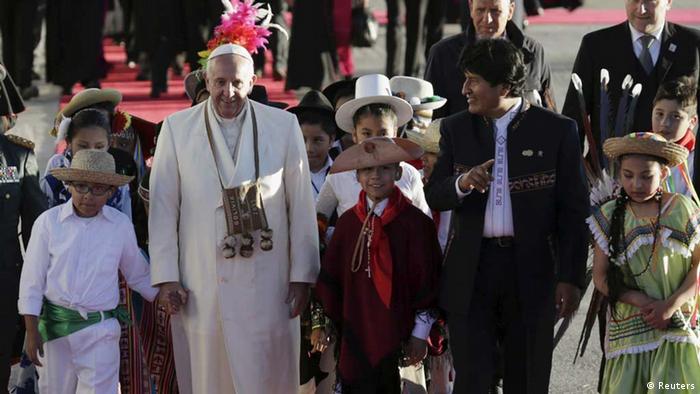 Francis landed in La Paz early on Wednesday evening, welcomed by choirs who sang in the indigenous Aymara language.

He was met by Bolivian President Evo Morales, a champion of Latin America's radical left and Bolivia's first indigenous president. Francis greeted Bolivians with a message of inclusion, continuing the central theme of his three-nation tour of South America.

He praised the country for taking important steps to make its poor and indigenous less marginalized. Bolivia is South America's poorest nation.

Morales handed Francis - whose language often echoes that of the leftist Liberation Theology movement - two politically-charged gifts. One was a crucifix carved into a Communist hammer and sickle. The other was a copy of "The Book of the Sea," - about the loss of Bolivia's access to the sea in the War of the Pacific with Peru between 1879 and 1883.

In a speech to civil authorities in La Paz later, Francis urged countries to improve diplomatic relations "in order to avoid conflicts between sister peoples and advance frank and open dialogue about their problems."

"I'm thinking about the sea here," said the pope, referring to the ongoing dispute between the two countries which is set to be ruled upon by the International Court of Justice by the end of the year. "Dialogue is indispensable. Instead of raising walls, we need to be building bridges."

Although the pope had praised Bolivia earlier, he also denounced a pervasive "atmosphere of inequality," and lamented that welcome economic growth had "opened the door to corruption."

With La Paz standing more than 4,000 meters (13,000 feet) above sea level, extra oxygen tanks were on hand for Francis, who lost a lung during his youth.

Aboard the flight from Ecuador, where the Argentine pope began his "homecoming" tour to South America, Francis was said to have drunk a tea made of a mix of coca leaves, chamomile and anise seeds to ward off the effects of altitude.

However, medical considerations meant that the pontiff's time in La Paz was limited to four hours, before he flew on to Santa Cruz in Bolivia's central lowlands, for a two-day stay.