In celebrating his first Easter in Rome, the Pope has broken with tradition in a number of ways. Many faithful seem to be delighted, while Catholic conservatives have expressed displeasure. 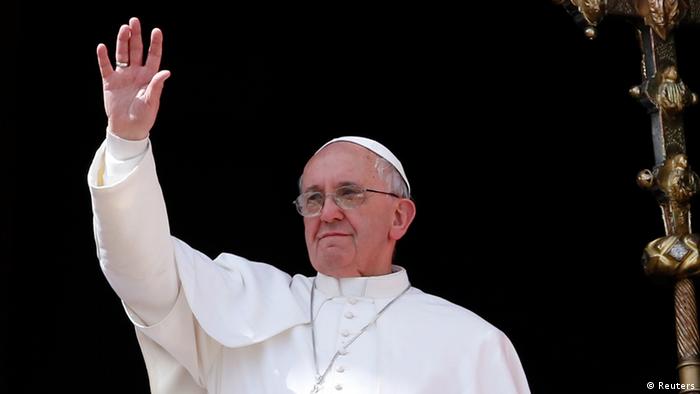 Protocols and formalities seem to matter little to the Jesuit from Argentina, whose unassuming demeanor has been the focus of much discussion. His encounters with the faithful are often spontaneous, creating quite a headache for his security detail. But the new head of the Catholic Church refuses to distance himself from the people: As their pope, he wants to be amongst them.

So after celebrating his first Easter Mass in Rome, Francis had himself driven across St Peter's Square, where around 250,000 people had gathered for the service, in an open-topped vehicle. He greeted the faithful, accepted the gift of a football shirt, and blessed large numbers of children. He spent an unusually long time with a young disabled boy, whom he embraced and kissed on the cheek. Particularly eye-catching posters and banners were given a hearty thumbs-up, in between the customary gestures of blessing. The new pope is certainly unconventional.

Peace for the Middle East, Africa and Korea

The new pontiff then proclaimed his Easter message. He condemned egotism, greed for profit, and human trafficking, and called for an end to the violence in the Middle East, in Africa, and on the Korea peninsula. "Christ is our peace," he said, urging peace for the Middle East, "and particularly between Israelis and Palestinians, who struggle to find the road of agreement, that they may willingly and courageously resume negotiations to end a conflict that has lasted all too long." 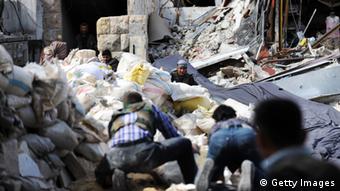 Peace for Syria was a key message in the Pope's speech

Pope Francis spoke with concern of turmoil in Africa, which he said was still the scene of bloody conflicts that threatened the lives of innocents. The Korean Peninsula, he continued, was another flashpoint where differences must be overcome and a new spirit of reconciliation needed to develop. He also called for "peace in Iraq, that every act of violence may end, and above all for dear Syria, for its people torn by conflict and for the many refugees who await help and comfort. How much blood has been shed!" Thoughtful words, which Francis has repeated many times in the past few days.

The Pope in prison

The new pope did not celebrate the Lord's Supper service on Maundy Thursday in the Basilica of St John Lateran, as is customary. Instead, he spent time in the Roman young offenders' institution Casal del Marmo. Alongside prisoners there - 38 men and 11 women - he recalled Jesus' Last Supper. Pope Francis does not shy away from contact with social outcasts: As Archbishop of Buenos Aires, he regularly spent Maundy Thursday with prisoners, the sick, or the poor.

During the Mass, the Pope followed Jesus' example by washing the feet of twelve young prisoners of different nationalities and religious affiliations. Two girls were also among those selected. Women do not normally take part in the ritual washing of feet. 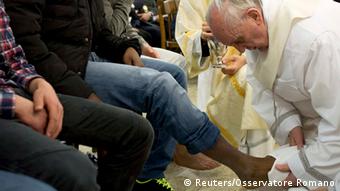 The previous pope, Benedict XVI, usually selected priests for the performance of this duty. Francis chose to ignore this precedent, immediately attracting criticism from conservative circles. Vatican spokesman Federico Lombardi eventually intervened in a conciliatory role and emphasized that this had been an exception.

Procession at the Colosseum

On Good Friday, during the traditional Via Dolorosa procession at the Roman Colosseum, Francis commemorated the suffering and death of Jesus Christ. Tens of thousands of people lined the route of the procession, which marks the fourteen Stations of the Cross. Wearing a simple soutane beneath a white coat, Francis followed the two-hour ceremony humbly, lost in thought. At the end, he told the faithful that Christians should respond to evil with good, by taking up the Cross, as Jesus had done.

In his first celebration of the Easter night in St Peter's on Saturday night, at which four young men received from him the sacraments of baptism and confirmation, the Pope also encouraged people not to be afraid of the unknown and the new, telling his followers that God always has surprises in store for them. 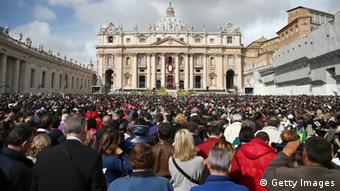 The Pope's blessing was delivered only in Latin and Italian

At the traditional Easter blessing "Urbi et Orbi" (to the city and to the world) on Easter Sunday, it was, once again, the Pope himself who surprised observers. Unlike his predecessors, Francis did not pronounce the Easter blessings in many different languages, but simply in Italian: "Dear brothers and sisters in Rome and throughout the world, Happy Easter! Happy Easter! What a joy it is for me to announce this message: Christ is risen! I would like it to go out to every house and every family, especially where the suffering is greatest, in hospitals, in prisons," the Pope declared from the loggia of St Peter's Cathedral.

Over the course of the Easter week, Pope Francis has made it very clear, through numerous gestures and fresh emphases, that what he wants is a new church: a church of preaching and modesty instead of self-referentiality and egotism. And Francis sets store by messages of faith that are easy to understand, like his message on Easter Sunday: "Christ died and rose once for all, and for everyone, but the power of the resurrection, this passover from slavery to evil to the freedom of goodness, must be accomplished in every age, in our concrete existence, in our everyday lives."

Choosing the name Pope Francis, Argentine Jorge Bergoglio has been selected as the head of the Catholic Church. DW offers in-depth, multimedia coverage on expectations for the first-ever pope from the developing world. (16.03.2013)

Pope Francis was all smiles, jokes and anecdotes at his first audience with the press. Journalists at the Vatican hope this pope will prove open to interviews - though there's reason to believe they may be disappointed. (16.03.2013)

The Vatican has strongly denied claims that Pope Francis did too little to protect the victims of Argentina’s military dictatorship. One priest who the pope is accused of betraying says he is “reconciled with the past.” (15.03.2013)