Francis seeks ′poor church for the poor′ | World| Breaking news and perspectives from around the globe | DW | 16.03.2013

Pope Francis was all smiles, jokes and anecdotes at his first audience with the press. Journalists at the Vatican hope this pope will prove open to interviews - though there's reason to believe they may be disappointed. 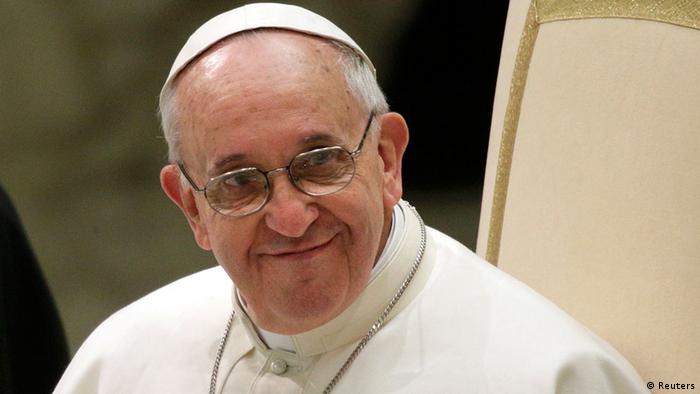 "The Italians are the worst," one journalist complained, an Italian herself, as journalists pressed forward and climbed on chairs holding up their mobile phones and table computers to snap pictures of Pope Francis at his first press audience on Saturday. Some 4,000 reporters and camera teams from around the world waited for hours before being admitted to the audience chamber. 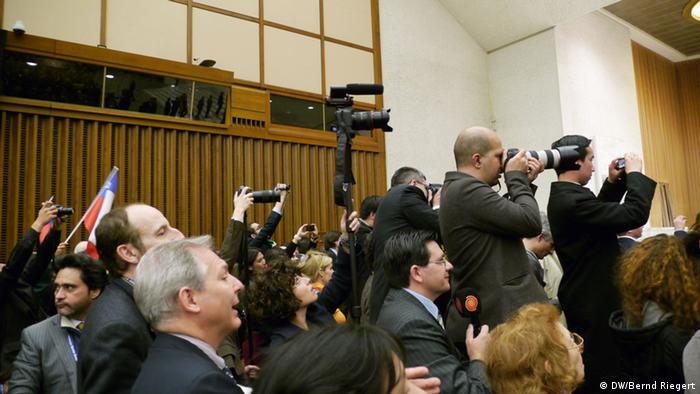 The press conference took an unusual turn when applause broke out as the pope appeared and sat down on a yellow chair placed on a huge marble stage. Many of the Italians and South Americans began to chant, "Long live the pope!" Only a few of the more tradition-conscious correspondents for Catholic media were taken aback by the pontiff's appearance. "He has black pants under the white soutane and black shoes. The crucifix is made of iron. It looks more like a Carnival costume," one observer said.

CNN's Ben Wedeman did not let on if he was impressed. "My understanding is this is not a press conference," he said with a grin. "This is simply an audience where he will bless us for the work we have done."

Pope Francis spoke for about 15 minutes - questions were not part of the program - then shook the hands of the Vaticanisti, the correspondents responsible for reporting on the Vatican, waved, smiled shyly, hugged an employee and was gone.

The pope addressed the assembled journalists as "dear friends" and said both the Roman Catholic Church and the media - in their own ways - needed to focus on the truth. He said the Vatican would focus on the spiritual and asked reporters to regard the church not as a political entity but a spiritual one. The Argentine appears to be steering clear of the pomp that accompanies his new role by choosing to have the Ring of the Fisherman, part of the pope's regalia which is freshly made for each pope, be cast of silver rather than the traditional gold. During his inauguration on Tuesday, he will wear synthetic robes rather than silk, as previous popes have done. 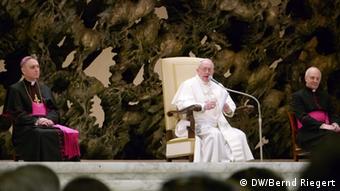 In his speech, Francis called for "a poor church for the poor," repeating the words of Francis of Assisi, a 13th century saint who made many enemies calling for a poor church. The modest new pope explained how he decided to choose the name Francis. Once it was clear during the Conclave that he would get the votes necessary to win, "my good friend Cardinal Claudio Hummes of Brazil hugged me and said don't forget about the poor. And that's how the name Francis of Assisi came into my heart," the pope said.

As a Jesuit priest, Francis said he could have chosen Clement XV to top Clement XIV, who had suppressed the Jesuit order in 1773. "But then I thought of Francis. I would like a poor church and a church for the poor," the pope said, adding that Jesus Christ, not the pope, is the center of the Catholic Church.

Not 'fond of media'

Many of the reporters left with a positive impression of Pope Francis, thanks to his modesty and agreeable aura, said Eliana Loza, a correspondent for Venezuela's El Universal.

Covering the selection of a pope for the second time, Loza sensed more media attention during the event eight years ago. "The attention of the media was very high when the pope resigned because it was very new," she added. Ahead of and during the Conclave she said editors still wanted reports of the troubles facing Italy's government, she said.

Francis' predecessor also invited journalists to an audience. The outgoing pope, Benedict XVI, was known to travel with and speak directly with reporters on international trips. Francis may take a different tack, Loza said. 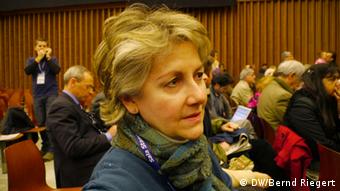 Loza hopes ties to the Vatican remain good for reporters

"Everyone says that this pope, when he was a cardinal, was not very fond of media," she said. "He never wanted to give interviews. … But the press office works very well, so I hope it will continue."

Francis has already decided that Vatican spokesman Frederico Lombardi, who, like the pope, is also a Jesuit, will retain his office.

There was little news to come from Pope Francis' press conference, but for many in attendance, it is likely to be one of the few times they see the new head of the Catholic Church. "I'm not going to get this close to him again any time soon," one technician said while sending photos from his mobile phone.

Choosing the name Pope Francis, Argentine Jorge Bergoglio has been selected as the head of the Catholic Church. DW offers in-depth, multimedia coverage on expectations for the first-ever pope from the developing world. (16.03.2013)

Human rights activists are accusing Pope Francis of not having distanced himself enough from the Argentine military dictatorship in the 1970s. But none of the charges have stuck. (15.03.2013)

How journalists covered the Conclave