Political soulmates, Polish PM Beata Szydlo and her Hungarian counterpart Viktor Orban, have met for talks about the EU's refugee quota plans. Both oppose the policy of spreading the burden, much to Brussels' chagrin. 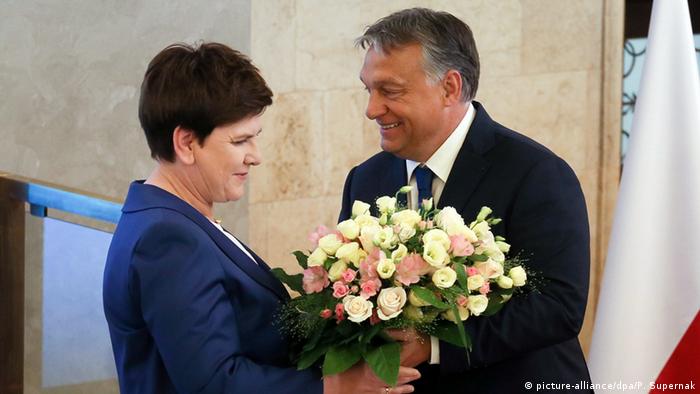 The two prime ministers met in the southern Polish city of Krakow ahead of the European Council summit on December 15 that is set to debate the 28-nation bloc's future, including the controversial refugee quota system.

Orban's right-wing government has opposed the EU plan, which seeks to share 160,000 asylum seekers around the 28-member bloc via mandatory quotas. Under the scheme, Hungary would receive less than 1,300 people, but it has not accepted a single person allocated so far.

Some 400,000 migrants and refugees passed through Hungary in 2015 before the government sealed off the southern borders with razor wire and fences.

Szydlo and Orban have also both been pushing for changes in the EU that would afford member states more autonomy. Both have also been heavily criticized in recent months for perceived moves seen to undermine their respective democratic systems.

The leader of Poland's conservative ruling party, Law and Justice (PiS), Jaroslaw Kaczynski, is also expected to meet Orban during his two-day trip, according to Polish media.

In August, two key members of the European Parliament told the German newspaper Die Welt that Poland and Hungary - among other countries - could face financial sanctions for "refusing to comply with EU values or rules" on migration relocation.

"There need to be stronger rules for the disbursement of funds,” Ingeborg Grässle, a Christian-Democrat MEP and the head of the parliament's committee on budgetary control, the German newspaper reported.

The European multi-annual framework - which sets the guidelines for EU spending for the 2014-2020 budget period - will be reviewed by the Commission by the end of this year.

Germany is the largest contributor to the EU budget, paying 14.3 billion euros more to the budget than it receives. EU funds to Poland and Hungary, meanwhile, are 9.4 billion euros and 4.6 billion euros respectively, larger than their contributions, Die Welt reports.

Visegrad Group has other plans

In November, the Visegrad Group - comprising Poland, Slovakia, the Czech Republic, and Hungary - interior ministers announced they would set up a migration crisis management centre to coordinate aid for refugees outside the EU in countries such as Lebanon and Jordan.

Visegrad Group interior ministers spoke out in favor of supporting refugees outside the EU, of tightening the bloc's external borders and greater stress on a policy of immigrants returning to their countries of origin.

Hungary, Poland, Czechia and Slovakia have said they're ready to veto any Brexit deal that would limit their citizens' rights to work in the UK. Article 50, which will begin the process, has yet to be triggered. (18.09.2016)

Leaders from Poland, Hungary, the Czech Republic and Slovakia have said the EU needs to grant more autonomy to member states after the Brexit vote. Hungary has also warned about the link between migration and terrorism. (21.07.2016)