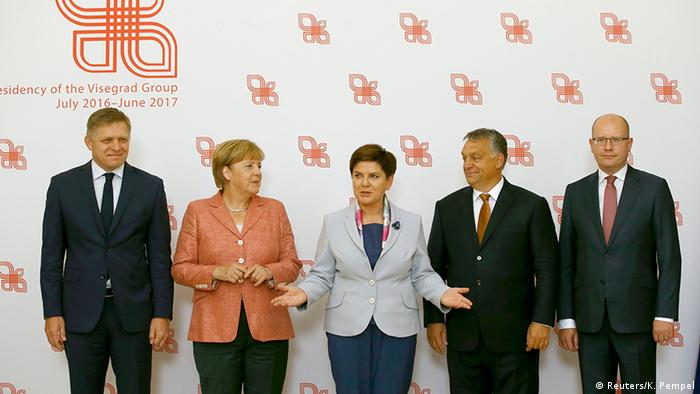 Ahead of the five-way talks, the EU leaders spoke about the Brexit fallout and their expectations from the upcoming Bratislava summit.

"Brexit is a deep cut in the history of EU integration, and that is why it is important to find the right answer to it," Merkel told reporters.

The informal meet in Bratislava in September would serve as a "kick-off point" for ideas on EU reforms, according to German head of government. Among other issues, the EU needed to deal with security and migration, according to Merkel. 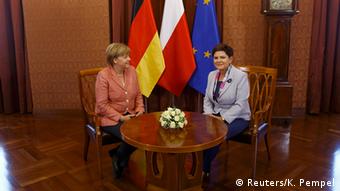 Szydlo briefly met with Merkel ahead of the press conference

Merkel also said that the bloc needed to find "ways to fight against breaking the law, but also do something for those in need" on the issue of refugees.

"The EU has lost its adaptability, and we have no right answer to migration and terrorism," Orban said.

During the joint press conference, however, the five leaders appeared to gloss over the deep divide between Berlin and the other governments on ways to resolve the migration problem.

Poland, Hungary, the Czech Republic, and Slovakia form the Visegrad group, an alliance of central-European countries, which has sharply criticized Berlin's welcoming attitude towards immigrants from the Middle East and Africa.

The Visegrad countries have also refused to take in refugees under an EU-wide quota system which Merkel has championed. During Merkel's visit to Prague on Thursday, Czech Prime Minister Bohuslav Sobotka restated that his country "cannot endorse as system that calls for mandatory quotas to distribute refugees."

"I think we will continue to discuss this issue," she said.

'Which side will Angela Merkel take?'

The authorities were developing plans to "replace the existing fence with a more serious structure," he told state radio.

"It will be capable of stopping hundreds of thousands of people simultaneously."

The move might prove useful if Turkey decides to send millions of refugees toward Western Europe, according to Orban.

The Hungarian strongman also slammed "bureaucrats in Brussels" for wanting to "let the refugees in" and redistribute them across the EU.

"The question is, which side will Angela Merkel take?" he asked ahead of the Warsaw trip.

Polish Foreign Minister Witold Wszczykowski also rejected the quota scheme, which he described as "forced relocation" of refugees in an interview published on Friday.

"I believe that taking in refugees and migrants should be determined by security, job market and social policy of a specific country," he told the German dpa news agency.

"Not everybody in Europe can afford the policy suggested by Germany," he added.

At the same time, Wszczykowski called for more cooperation with Paris and Berlin, acknowledging that Germany had an important role to play in Europe.

"The way this role is fulfilled depends on Germany, on whether Berlin acts only in its own interest or takes interests of other countries into account. We often see the intent of following only its own agenda," he said in an interview published in German.

"Of course, every country has a right to do so, but sometimes we would expect a certain willingness to compromise," he added.

Specifically, Wszczykowski named German doubts about military build-up in eastern Europe, as well as energy cooperation and diplomatic ties with Russia. "Is it worth it building those ties at the expense of relations with Poland?" he asked.

Merkel has visited several east European countries during the week to discuss the future of the EU after the Brexit vote.

Check out DW's special page on one year since Chancellor Merkel decided to open the doors to hundreds of thousands of refugees:
http://www.dw.com/en/top-stories/merkels-pledge/s-32904