Hate symbols were sprayed on the walls of a restaurant in Syke, near Bremen, before it was set on fire. Police think that the owner's ethnicity might be part of the motivation for the attack. 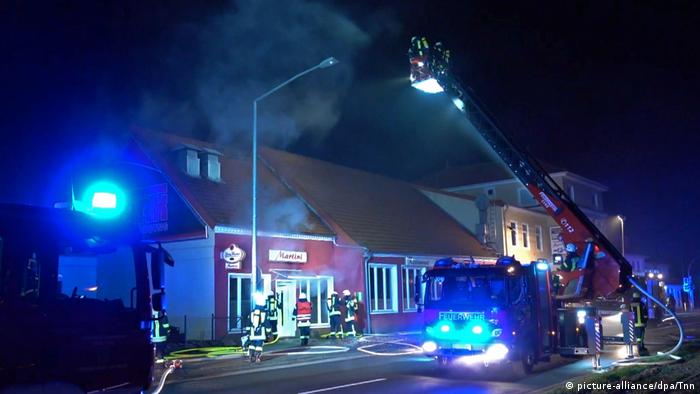 Hate symbols, including two swastikas, were sprayed on the back wall of restaurant and its windows were smashed during an attack in Syke, a town in northern Germany, early on Thursday morning.

The restaurant appears to then have been deliberately set on fire in what police are investigating as a probable arson attack. Fire services evacuated six people after the fire threatened to spread to a neighboring house, a police spokesperson said.

A "xenophobic motive" was the most likely reason for the incident, said police on Thursday. The man who ran the restaurant was from Syke but had a migrant background, added the State Protection office — the German office responsible for politically-motivate crime.

A search is underway to find those who carried out the attack which caused upwards of €150,000 ($163,271) in damages, but the police say they have currently no leads to follow.

Read more: Germany: Number of right-wing extremists rose by a third in 2019

The attack follows just under a month after the German Interior Minister Horst Seehofer banned neo-Nazi group "Combat 18" from operating in Germany, saying its purpose was "similar to national socialism."

Vandals have defaced more than 100 graves with swastikas in a Jewish cemetery in eastern France. The interior minister condemned the "heinous acts" — the latest in a string of anti-Semitic incidents in the Alsace region. (03.12.2019)

An amusement park in southwestern Germany has had to shut down a new ride after people quickly noticed that it looked like a big spinning swastika. The "Adlerflug" ("Eagle's Flight") will now be redesigned. (20.08.2019)