An amusement park in southwestern Germany has had to shut down a new ride after people quickly noticed that it looked like a big spinning swastika. The "Adlerflug" ("Eagle's Flight") will now be redesigned. 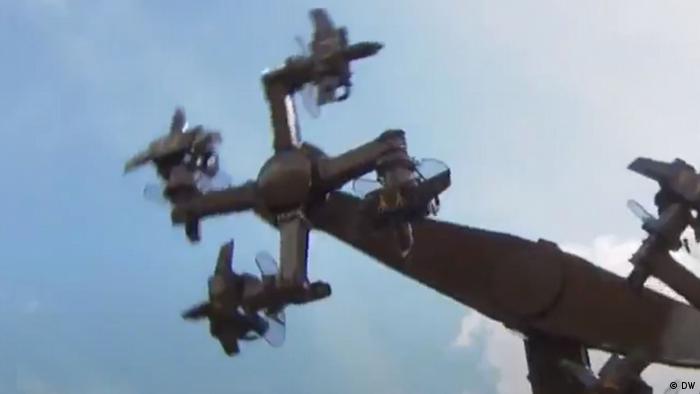 A new ride at the "Tatzmania" amusement park in the Black Forest town of Löffingen in southwest Germany was shut down this week for a design flaw that has nothing to do with safety.

After a video of "Adlerflug" ("Eagle's Flight") was posted online, people quickly pointed out that the ride's eagle-shaped cars are connected to the structure's axis at an angle that strongly resembles a swastika, the notorious symbol of Nazi Germany.

After a social media backlash, the owners of the amusement park decided to close the ride immediately and redesign it together with the Italian manufacturer. The rest of the park's attractions will continue normal operations.

Rüdiger Braun, owner of the amusement park, said he was sorry about the ride's design.

"First of all, I would like to emphasize that I would like to apologize with all form to all persons who feel disturbed and insulted by our design," Braun told the European Broadcasting Union (EBU). Braun added that the ride would be redesigned with three spinning eagles, rather than four.

"Then we will have this problem under control," he said.

One Tatzmania patron said he thought it was strange that no one had noticed the ride's shape earlier.

"One wonders, of course, how one builds something like this; on the one hand because it still is a sensitive topic. On the other hand, it is only the engineering, and it just happens to look like that."

Another park visitor said that the ride didn't bother her.

"I'm not bothered. Because I didn't even notice that it looked like swastikas. And the children, they think nothing of it."