Poles march in support of judge critical of government reforms

Judge Igor Tuleya could be stripped of his immunity and face prosecution after allowing media into one of his courtrooms. Protesters say he is being targeted for questioning the government's controversial court reforms. 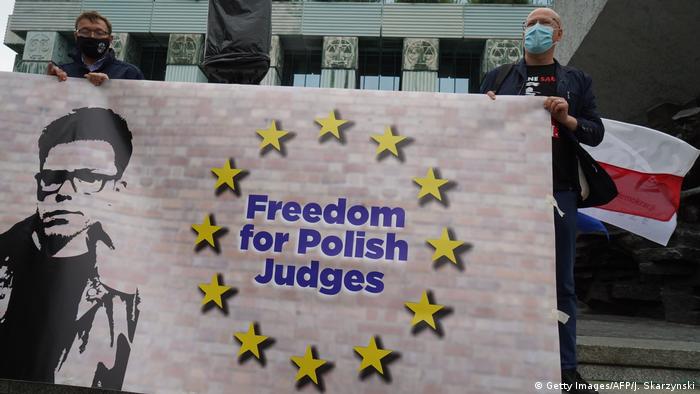 Hundreds of Polish people marched in cities across the country on Monday to show their support for Warsaw district judge Igor Tuleya, who has been critical of the government's judicial reforms.

The protests were organized by KOD, the pro-democracy movement, along with rights groups and judicial associations.

Rallies were held under the slogan "Today Tuleya, Tomorrow You" in the capital, Warsaw, and in a number of other cities, including Gdansk, Kielce, Lodz and Poznan. The protests were attended by up to 150 people, in line with coronavirus limits on public gatherings.

Judge Tuleya is accused of overstepping his authority, when he allowed media into a courtroom hearing on whether the governing Law and Justice (PiS) party violated rules during a 2016 vote in parliament. A hearing on Tuesday will decide whether his immunity will be lifted, a step that would allow him to face prosecution. 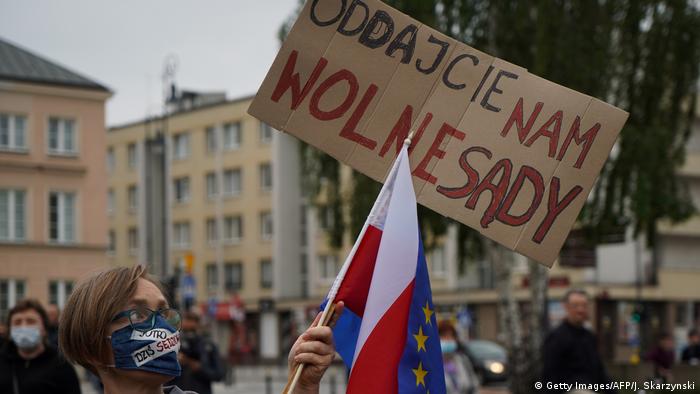 Protest numbers were limited to 150 due to coronavirus restrictions

"Tuleya is the first judge who could lose his immunity and as a result even his freedom," protest organizers said on the Facebook event page. "Whether other judges defiant of political authorities ... will end up in the dock for their verdicts, civic attitude or common offenses 'proven' in rigged trials depends on our strong opposition."

Judge Tuleya has been supported by judges from the Czech Republic, Norway, the Netherlands, and Turkey, among other countries.

Since coming to power in 2015, the ruling conservative Law and Justice Party (PiS) has passed a series of sweeping judicial changes, including the creation in 2017 of a government-appointed disciplinary chamber to try judges. Legislation passed earlier this year also means judges can be disciplined for questioning the government's reforms. In April, the European Court of Justice (ECJ) ordered Poland to suspend the disciplinary chamber over concerns about bias.

PiS has has argued its judicial changes are necessary to control corruption within the court system, but party critics say the reforms are just an attempt to muzzle judges.

The reforms have also provoked sharp criticism from the European Union, which accuses PiS of trying to erode judicial independence and the rule of law. In 2017, the EU launched proceedings against Poland over the overhaul, which could result in Poland's EU voting rights being suspended.

Polish judges wanted the European Court of Justice to rule on the legality of the 2017 reforms. Poland's government has been on a collision course with the EU due to its overhaul of the court system for several years. (26.03.2020)

The European Union recently launched a legal case against Poland after saying the country was seeking to muzzle judges. Amid this, a place at the head of the Supreme Court is up for grabs. (23.05.2020)