Critics say the Polish reforms could hinder Jewish claims for compensation for property seized by Nazi Germany. Israel slammed the planned changes as "immoral" while the US urged for the bill to be scrapped. 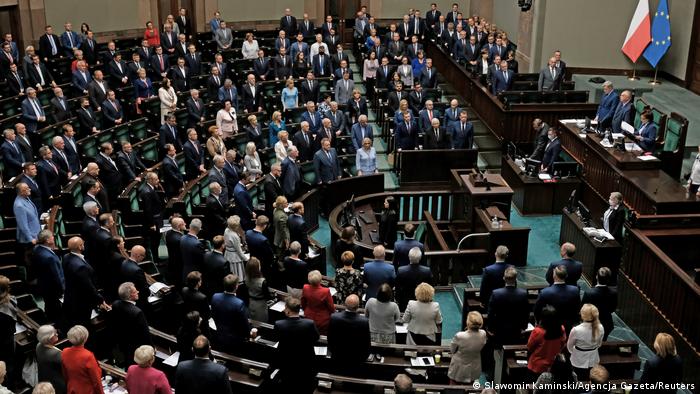 The Polish government defended a bill on Friday that would change the rules for property restitution in the country.

Critics say the measure could make it harder for Jewish people to recover property seized by Nazi Germany during the occupation of Poland in World War II, and afterwards under communist leaders.

How did Poland respond?

Poland's Foreign Ministry dismissed criticism of the bill, saying the changes would not hamper claims that are processed through courts.

They "do not in any way restrict the possibility of bringing civil suits to seek damages, irrespective of the plaintiff's nationality or origin," the ministry said.

The ministry also said it has noted the concern from Israeli officials, but that the remarks "are indicative of ignorance of the facts and the Polish law.''

"Poland is by no means responsible for the Holocaust, an atrocity committed by the German occupant also on Polish citizens of Jewish origin," the statement read.

What is in the bill?

The authors behind the bill say it is needed to comply with a 2015 Constitutional Tribunal ruling, which found that there must be a cut-off point for contesting administrative decisions.

The bill sets the statue of limitations of 10 to 30 years, depending on the case.

The Polish government says the new rules aim to end fraud and stop irregularities concerning property restitution in Krakow, Warsaw and other cities.

But the statue of limitations means that the owners and their descendants could be barred from receiving compensation after a certain date, the Gazeta Wyborcza newspaper reported, citing experts.

The bill now passes to the Senate for approval and must be signed by President Andrzej Duda before it can become law.

How have others reacted?

The Israeli Embassy criticized the bills passage, saying it would "make it impossible" for property seized from Jewish owners to be returned and make it harder for heirs to seek compensation.

"This immoral law will have a serious impact on the relations between our countries,'' the embassy said on Twitter.

"The decision of Poland's parliament yesterday was a step in the wrong direction. We urge Poland not to move this legislation forward," US State Department spokesman Ned Price said on Twitter.

Poland was home to one of the world's biggest Jewish communities before World War II.

Most were killed in the Holocaustunder Nazi Germany's occupation.

Their property was confiscated, and later seized by Poland's postwar communist rulers.

Jewish former property owners and their descendants have been campaigning for compensation from Poland since the fall of communism in 1989.

Poland's ruling party and a veterans' association have demanded that Polish victims of Auschwitz be better commemorated. They say non-Jewish victims are ignored due to the main focus on remembering the Holocaust.