Indonesian authorities have discovered flip-flops, plastic bottles and cups in a dead sperm whale. Five Asian nations, including Indonesia, are considered the world's worst plastic polluters of the earth's oceans. 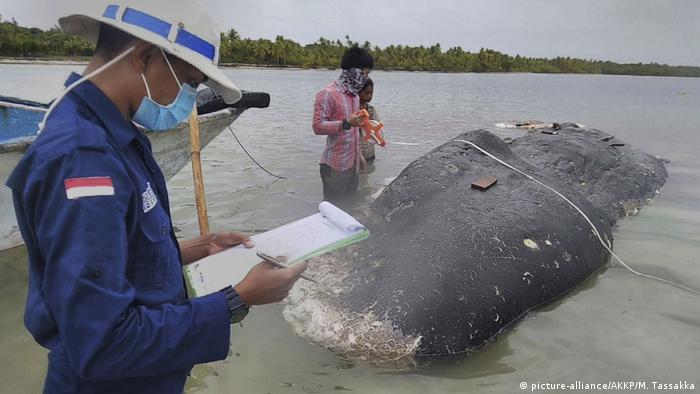 Indonesian park officials on Tuesday said a sperm whale was found dead in a national park with nearly six kilograms (13.2 pounds) of plastic in its stomach.

"Although we can't say for sure that the death was caused by plastic, the whale had digested over 1,000 plastic pieces, including 115 plastic cups," the UK branch of the World Wide Fund for Nature (WWF) said in a tweet.

Indonesia's coordinating minister for maritime affairs, Luhut Binsar Panddjaitan, said more needed to be done to create awareness about the impact of plastic waste in our oceans. He vowed that the government would bolster its efforts to stop plastic from reaching oceans in the near future.

"I'm so sad to hear this," said Pandjaitan. "It is possible that many other marine animals are also contaminated with plastic waste and this is very dangerous for our lives."

Officials at Wakatobi park, where the sperm whale was found, said the carcass would be buried and the remains would be used for scientific purposes at a local marine research center. 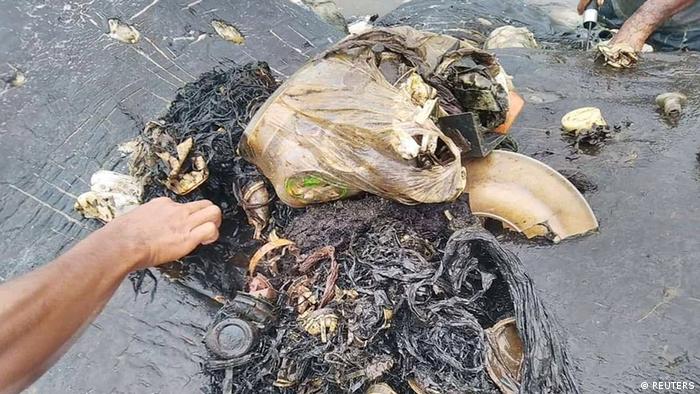 Officials found plastic bottles and flip-flops, among more than 1,000 plastic items, in the whale's stomach

In 2015, a study found that five Asian countries, including China, Indonesia, the Philippines, Vietnam and Thailand, accounted for nearly two-thirds of all plastic waste making its way to oceans.

According to environmental groups, roughly 100,000 marine creatures die annually due to entanglement in plastic. That figure does not include creatures that die from ingesting plastic.

"As the sperm whale that died off Indonesia had eaten flip-flops, bottles, bags and 115 drinking cups, we should keep in mind that by 2050, there will be more plastic than fish in the world's oceans if we don't act now," tweeted the Green Party at the European Parliament.

In 2016, DW reporter Tamsin Walker made it her New Year's resolution to eradicate plastic packaging from her life. After an initial shock to the system, she got used to it. But did she stick to it? (11.10.2018)

A librarian on the Indonesian island of Java has started a mobile library, lending children books in exchange for trash. It develops their awareness of the environment — and they get to read more at the same time.

Small single-use plastic packets, also known as sachets, are ubiquitous in South East Asia. They are used for coffee, soap or laundry detergent. Large packs are too expensive for many there, but the single sachet packs aren't a better deal. They end up costing more. And they're bad for the environment.