In 2016, DW reporter Tamsin Walker made it her New Year's resolution to eradicate plastic packaging from her life. After an initial shock to the system, she got used to it. But did she stick to it? 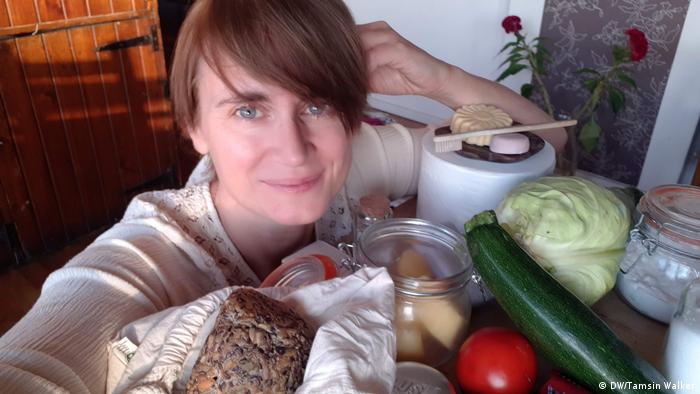 The night I decided to empty the contents of my kitchen food cupboard into what felt like a thousand glass jars, was the first time I had ever really stopped to look at the undeniable extent of my own plastic usage. The realization was as shocking as the prospect of finding alternatives was daunting.

Not only for me, but also for my kids who I was dragging along for the ride. A ride on which there would be none of their favorite sweets, yoghurts and breakfast cereal, no potato chips, granola bars or the biscuits they love. Instead there would be four weeks of experimentation and adventure.

My plan was to get our fruits and vegetables from my local market; staples such as rice, beans and nuts from the city's only unpackaged food store; bread, cheese and meat from traders who would allow me to take my own tubs to be filled. How hard could that be?

I also set myself the goal of swapping liquid shampoo and shower gel for the solid varieties, making whatever I could from scratch and doing without anything that fell in none of the above categories.

How to make a reusable sandwich wrapper

For a while, my endeavors were all-consuming and often frustrating. I dreamed of plastic and the alternatives for nights on end, inadvertently blocked my kitchen sink with a wax and cocoa butter mix I'd melted to make moisturizer (I ended up with a very moist sink), made several failed attempts to satisfy my kids' sweet teeth with "strawberry leather" and charred apricot blobs, and resorted to toothpaste in a metal tube with a plastic lid after my own attempt at a dental care concoction turned to liquid in the Berlin winter sun.

On the upside, I sourced bamboo toothbrushes, unpackaged toilet paper, refillable cleaning products, upcycled plastic bags and after a significant amount of trial-and-error research, knew which shops within reasonable reach would let me take my own containers or bags to fill. There weren't many, and because the supermarket was not one of them, I no longer had to trawl around it forgetting what I'd come for. Shopping became a more targeted experience.

Overall, we managed pretty well, and after the first four weeks, we (maybe it was me) decided to keep going. Any plastic sin we committed went into an empty yoghurt jar so we could see exactly where we were still tripping up.

For each of what became the three months of the experiment, we filled one jar. Never more, never less. We weren't living entirely plastic-packaging-free, but we were close enough for it to feel like an achievement. I thought we'd pretty much nailed it.

It's slippery stuff, that plastic

How wrong I was. I can't say how long it took for old habits to creep back in, but some of them did. 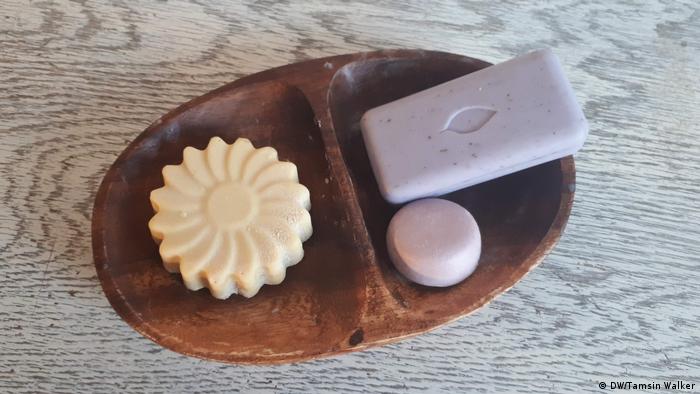 The hard stuff: Bars of conditioner, soap and shampoo

Although I'd continued to buy products loose, in glass or paper whenever possible, and although I hadn't relapsed with items like soap and shampoo, when I bought a new bottle of washing-up liquid a few months ago, I could no longer deny just how hit and miss I'd become with a lot of other things.

I had given up on my homemade creams and potions, ditched the toothpaste after reading a bad review, burned or undercooked enough batches of biscuits to make shop-bought ones taste like the only real option, and I'd also stopped making what turned out to be an unrealistically long trek to the plastic-free shop at the far side of the city.

As a result, rice and grains had reappeared on my shelves in plastic packets. Wrapped cheese, tofu, potato chips, nuts, sweets and cookies had also made a comeback.

Living without plastic, three years on

Though their return into the family fold was welcomed with sticky fingers, wide eyes and open mouths, every time I bought something packaged in the offending material, I felt a twinge of guilt. A sense of having failed. And worse, being almost resigned to it.

But then a new unwrapped shop opened much closer to home, and crossing its threshold for the first time reignited my desire to make a proactive — if tiny — contribution to solving our global plastic problem.

The impact the shop had on me was instant. The fact that it is close enough to be genuinely viable put the idea of (almost) plastic-free living within easier reach. I can realistically get things like grains, rice and nuts there, as well as the ingredients for round two of my foray into my own line of wholly imperfect homemade hygiene products.

I was immediately motivated to go back to my cauldron. First up, an all-purpose household cleaning liquid that could also double up as washing-up liquid. Hmmm... Let's just say it came out smelling like it was what needed to be washed. Not my finest witching hour. 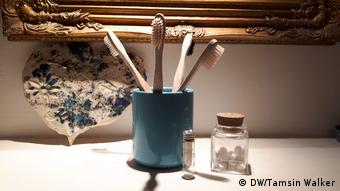 Since then, we've had family sessions making liquid soap using water and horse chestnut conkers we collected in the park. That didn't keep too well. But we've had great success with lip balm, granola bars and moisturizer. And because things were going so well, I even decided to take another stab at DIY toothpaste using a recipe that called for cacao nibs and peppermint.

It sounded like a bedtime dose of mint-chocolate-chip ice cream. Only when we came to test it out, nothing could have been further from the truth. Far from being a mini scoop of evening delight, it was a violent assault on the taste buds. There's a slight chance I got my ingredients muddled.

But because there's been some movement in the anti-plastic movement since early 2016, I've now managed to find unpackaged tooth tabs, canned deodorant, solid conditioner as well as plastic-free bamboo tissues and toilet paper. 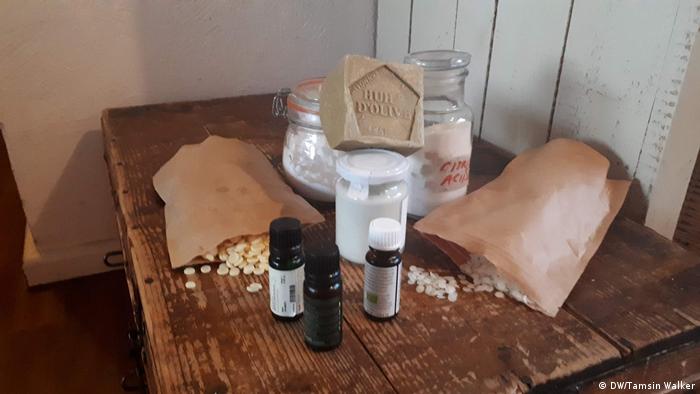 Doing it for myself. All I need for hours of fun

I'm aware that the quest to find such items smacks of luxury problems. But the truth is, what I buy, what we all buy, invariably becomes everyone's problem, because it's a problem for the planet.

In an ideal world, policymakers and manufacturers would have a greater handle on all this. But because it's not, and because they don't, those who help create a demand for alternatives by producing and buying more obscure items are making a positive contribution.

So, I have now renewed my vows to living, and I phrase this carefully, "as plastic-free a life as is feasible within my family's budgetary and time constraints." I'll keep you posted