The trials and tribulations of plastic-free living | Environment| All topics from climate change to conservation | DW | 08.04.2016

After four weeks of living without creating plastic trash, DW's Tamsin Walker was so caught up in it that she decided to keep going for another month. That time is now up too, so will she go plastic-free forever? 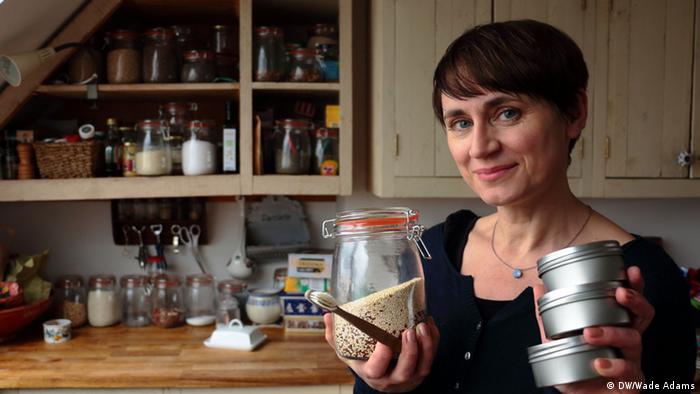 At the start of this year I embarked on an experiment to see whether I could feasibly, indeed easily, keep myself and my family in food and hygiene articles without generating any plastic waste. That meant buying neither comestibles, bathroom products or cleaning items packaged in any form of plastic, and spending no more time or money than I would on my regular grocery run. So how did I fare?

When I think back to the early days of this lifestyle adventure, I recall nights in which plastic-related questions chased one another through my dreams and loomed larger than the Berlin winter during my waking hours. Where would I find breakfast cereal? Shampoo? Is pasta really available in 100 percent paper boxes? What would I do about rice? Washing-up liquid? And, and, and… Ten weeks in - because after my original four-week foray into sustainable living, I decided to extend my stay - I have the answers.

Yes, pasta comes in cardboard boxes, some organic food shops sell cleaning products directly from the barrel, and shampoo is easily available in bar form. And in case you're wondering, it also smells good and lathers with as much determination as the bottled stuff. As for rice and breakfast cereal, to get that without any kind plastic I have to go across town to the so-called naked food store. And though that massively blows my time budget, I have twice succumbed - driven at least in part by my children's wishes for a thoroughly crunchy breakfast experience. The distances we travel for love.


Apart from those excursions, undertaken with three of my daughters who got so carried away pulling food dispenser levers that I ended up buying 16 euros worth of almonds and rather a lot of dried kidney beans, I have tried to shop locally.

Customer is not always king

Old habits die hard, and at first I clung to the idea that I would need to get some things from the supermarket. Milk, for example, certain fruit and veg, or even cheese. But a couple of weeks ago, when I asked the vendor at the deli counter to put my cheddar directly into a paper bag, she looked at me as if I had asked her to slip a severed finger in with it. She then rattled off the reasons why she could not and would not abide by that great German shopping rule: the customer is king.

Turns out, I was not even a measly duchess, because a) the cheese would dry out, b) it would stick to the bag, and c) she would be breaking the store's rules. Hygiene trumps royalty in Berlin.


Now I know where I stand and my supermarket trips have consequently become even fewer and further between. And when I do venture through the store's gaping doors, I see my lack of choice as a form of liberty. I know what I can get, so breeze in and out in a matter of minutes. No overloaded trolley for me. A definite plus point for plastic-free.

That said, we do need to eat. Thankfully, there is a market within easy reach of my place, and the traders are happy to put my purchases directly into a cloth bag or, in the case of fish or meat, directly into one of the boxes I take along with me. It's a tad embarrassing when you forget, as I have on more than one occasion, to take the lids. But necessity, they say, is the mother of invention, and a winter hat can be a truly versatile thing.

So between the market and a once-a-month pilgrimage to the packaging-free store, I have our food needs pretty much covered. But what about personal hygiene? 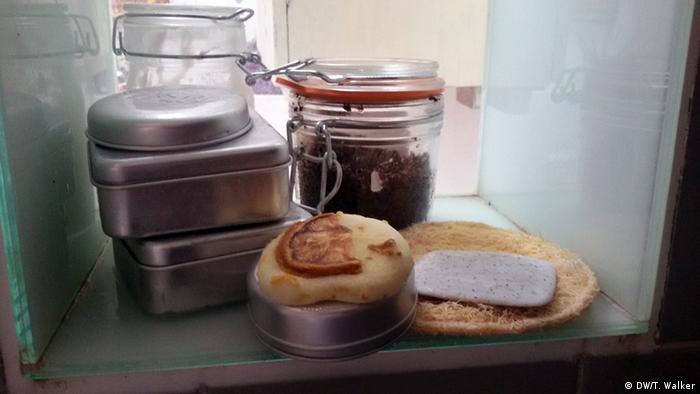 Having solved my toilet paper problem (it came from Munich in a cardboard box), stocked up on unpackaged soaps, shampoo and even conditioner bars, there was still the toothpaste issue. One night, the kids and I got inventive and whipped up our own using coconut oil, baking soda and peppermint oil. My smallest daughter asked in horror why I had put "such disgusting stuff" in it, and swore off it forever.

The others gave it a couple of days before conceding that their little sister was, for once, right. Next stop: tooth tablets, which are available at Lush in returnable bottles. They were tolerated for a little longer, but the bottle now sits half-empty on the bathroom shelf. Will it ever be returned? We have now compromised on regular-ish toothpaste in a foil tube with a small plastic top, which like all our packaging sins and ends up in an empty yoghurt jar.


The hardcore zero wasters would take a decade to fill our jar, which just goes to show far we still have to go. We pulled it off in a month, which would probably get me into trouble in more earnest circles, but we are trying. And I would even go so far as to say that much of the plastic waste we have generated over the past ten weeks has been by accident rather than by design.

There have been children's birthdays with presents from friends. I suppose I could have alerted everyone, but that seemed a little extreme and dogma has never been my thing. And then there are my slip-ups. Buying a cotton mop head and not noticing its plastic packaging before I got home, or asking the market trader to put my cheese in waxed paper and not realising he had handed it to me in a plastic bag. Then there was a subscription that I had to cancel because the paper arrived in forbidden wrapping.


Upcycling the plastic away

So what to do with unwanted, unrequested, unseen plastic? Either it has to be shoved into our jar, where it would take up space we clearly need for toothpaste tops and birthday gift packaging, or be reused. And in our current mindset, that's a no-brainer. Exactly what to make from a small square of plastic with the word "mop" written on it, is less obvious. Or at least it was until I discovered the apparently endless fun there is to be had from making sandwich wrappers and what we call food shower caps: plastic bag on the inside, fabric on the outside, we use them for covering leftovers in the fridge. Guess what my family will be getting for their birthdays this year?


Speaking thereof, the concerns I had about how the children would adjust have proved to be largely unfounded. Though there have been many questions along the way, they have taken to this new way of living with greater ease and acceptance than most adults would. In part, I believe, because they have enjoyed making as opposed to buying lip balm, biscuits, chocolate, body butter and even - for a moment at least - toothpaste.

But I also think they have embraced the whole experiment out of a fondness for the natural world and a genuine belief that they can play some small role in protecting it. Perhaps they are right. And for that reason, I'm fairly sure we will be continuing with this way of life. At least for the most part.