Philippines′ Duterte to visit Beijing amid China sea tensions | Asia | An in-depth look at news from across the continent | DW | 27.08.2019

Philippine President Duterte is once again visiting China, this time to discuss contentious issues like the territorial row over the South China Sea. Calls have grown louder for Duterte to take a tough line on Beijing. 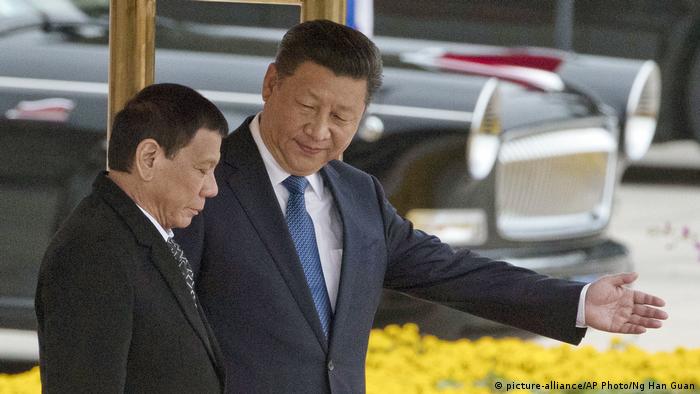 Philippine President Rodrigo Duterte's trip to China, from August 28 to September 2, comes amid growing pressure on the leader at home to confront Beijing. The Philippines and China have conflicting territorial claims over parts of the South China Sea, which have soured their bilateral ties.

But since coming to power in 2016, Duterte has so far embraced China and had largely set aside the once-tense standoff between the two nations over the resource-rich waterway. Nevertheless, a series of confrontations in recent weeks have stoked discontent in the Philippines.

In Beijing, Duterte is going to hold talks with Chinese President Xi Jinping and other high-ranking officials. Duterte's visit will be his fifth to China, but the first during which he plans to finally raise the thorny territorial dispute that has complicated bilateral relations.

In 2016, the Philippines won a landmark case in the Permanent Court of Arbitration in The Hague. The ruling stated that China's overarching claims over the South China Sea have no legal basis under the 1982 UN Convention on the Law of the Sea. It invalidated China's claim, based on its so-called nine-dash line, to historic sovereignty over most of the busy South China Sea waterway.

China refused to participate in the arbitration case and has ignored the resulting ruling.

But after he took over the reins, Duterte adopted a policy of non-confrontation with China and decided to set aside the maritime ruling in favor of attracting Chinese aid, trade and investment.

Earlier this month, Duterte said he intended to finally discuss the Hague ruling with Xi. "I have about two more years, plus months left (in office). It's about time that we start talking," said Duterte at the time.

The Philippine president has long been criticized by nationalists and left-wing groups for not immediately demanding Chinese compliance with the ruling.

In November, China and the Philippines signed a Memorandum of Understanding which provides a "non-legally binding framework" for joint exploration of offshore energy reserves in the South China Sea, believed to be rich in hydrocarbons.

Duterte welcomed the initiative, saying joint exploration could help resolve the territorial row in the contested waters. He also promised that Philippine interests would be protected.

"The [joint oil and gas exploration] proposal of 60-40 in our favor would be a good start. I hope that it would graduate into something like, towards how we solve the arbitral ruling peacefully," Duterte said in a speech last week.

"It's doubtful whether the Philippines, by itself, has enough wherewithal to extract oil and gas resources in the sea. However, Duterte should be extremely careful in entering any legally-binding joint exploration with China. Many legal experts warn this could contravene our sovereign rights," Punongbayan said.

While Chinese private investments in the Philippines have increased in recent years, Beijing's pledge to invest in the Duterte government's "Build. Build. Build." program has been slow to materialize.

The initiative is the centerpiece of the Duterte administration's economic policy, aimed at bringing down the poverty rate from 21.6% to 14% by 2022 by expanding the building of infrastructure such as roads, airports and railways.

The unfulfilled economic promises, along with the continued harassment of Filipino fishermen by the Chinese coast guard and fishermen, have contributed to an anti-Chinese sentiment in the Philippines.

Bilateral relations took a wrong turn after a Chinese fishing trawler hit and sank a Filipino boat in June, triggering a public outcry in the Philippines and criticism from opposition politicians and former officials.

Read more: Did China commit 'crimes against humanity' in the South China Sea?

Richard Heydarian, a political analyst, told DW that Duterte's China visit could be seen as the president's attempt to mollify the Philippine public.

"It could be a double-edged sword. The frequency of his visits to China definitely says a lot about the president's priorities and who he sees as his ultimate strategic patron. But the president could use this meeting to selectively justify resource-sharing agreements with China," said Heydarian.

"This is an orchestrated plot to pacify the public in light of China's encroachment in Philippine territory and to bolster Duterte's strongman image in the face of growing hostility at home. It is posturing," Custodio told DW.

"The president is complying with his commitment. He said three years ago that there would come a time when he would enforce The Hague Ruling. This is the time now," Panelo told DW. "We can only expect the best. The president is always firm. He is a master tactician. When he says he will do something, it is precisely what he does. He only tells you when it is done," Panelo said.

President Xi Jinping has signed 29 bilateral deals with the Philippines on his landmark visit to Manila. But experts say his main agenda was to forge cooperation on the disputed South China Sea. Ana P. Santos reports. (21.11.2018)