The Permanent Court of Arbitration in The Hague has delivered its verdict on the territorial spat. DW answers some of the questions related to the case to explain what the dispute is about and what is at stake. 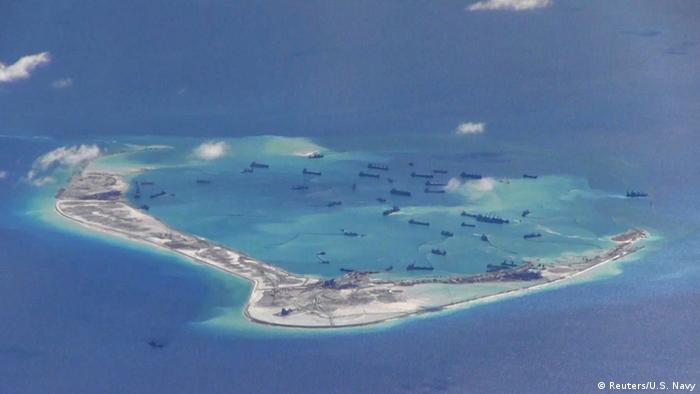 On January 22, 2013 the Philippines took the South China Sea (SCS) dispute to the Permanent Court of Arbitration (PCA) located at The Hague in the Netherlands.

1. Which legal status do China's claims in the SCS have, especially when it comes to the so-called nine-dash-line (NDL)?

2. Are the claimed areas islands, rocks or just submerged stretches of sand, whose surface can only be seen at low tide? This is one of the key questions, because in international law an island leads to an entirely different territorial claim than a rock.

The Philippines has opted out of clarifying the question: which country is able to claim sovereignty over islands, reefs and rocks in the disputed area? Manila wants to clarify how the United Nations Convention on the Law of the Sea (UNCLOS) has to be applied.

The cause of the dispute is some islets of the Spratly archipelago, which covers an area of more than 420,000 square kilometers in the SCS. The islands are controlled by various neighboring countries, together with some other reefs and rocks. "Scarborough Shoal," "Second Thomas Shoal," "Gaven Riff" and "Reed Bank" are among them.

What is the legal basis for the claims?

The Philippines refers to the United Nations Convention on the Law of the Sea (UNCLOS), which after years of negotiations was agreed on in 1982, and came into effect in 1994. Together with 165 other nations, the Philippines and the People's Republic of China (PRC) signed the convention. But the United States hasn't.

China claims to have historic rights and cites a series of controversial documents, some of them dating back to the Ming dynasty which ruled China between the 14th and 17th centuries. However, historic issues are not part of the jurisdiction of UNCLOS.

All signatories of the maritime convention have committed themselves to settle any issue peacefully. One mechanism is to take a dispute to court, even if one of the contestants declines arbitration.

Does the PCA have jurisdiction in this case?

On February 19, 2013 the People's Republic of China rejected the Philippines' move and said it did not accept the court's jurisdiction.

According to the PRC, Manila's decision will eventually lead to the question: which country has the right of sovereignty and where maritime borders have to be drawn? In other words, this dispute does not center on the interpretation of UNCLOS, but territorial issues. However, in the PRC's view, this exceeds the jurisdiction of the Permanent Court of Arbitration.

Beijing argues that two treaties between China and the Association of Southeast Asian Nations (ASEAN) would be appropriate to solve the dispute: the ASEAN-China Declaration on the Conduct of Parties in the South China Sea (2002) and the ASEAN's Treaty of Amity and Cooperation in Southeast Asia from 1976 which was signed by China in 2003. The Philippines, in turn, has declared that all attempts to solve the dispute on the basis of the two treaties have been either blocked or delayed by China.

The court accepted the case and initiated proceedings on October 29, 2015, despite the PRC's objections. However, the tribunal rejected some of the Philippines' charges, declaring that the court's jurisdiction was only applicable to lawsuits connected to UNCLOS.

Until today, China does not acknowledge the court's jurisdiction and does not participate in the proceedings.

What is the nine-dash-line (NDL) all about?

The demarcation line was inherited by the Communist rulers of China after the PRC was founded in 1949 and, until today, is an official claim of the PRC.

There are two major problems with the nine-dash-line:

1. Nobody has ever defined where the actual dashes are located. There is no exact geographic data using longitudes and latitudes.

2. China has never clarified whether it only claims sovereignty over the islets, reefs and rocks inside the NDL or the entire area falling within the NDL.

Many legal experts say the NDL does not comply with international law.

What may happen after the verdict?

According to the UNCLOS, the court's ruling is binding on all contesting parties. Annex VII of the UNCLOS says the judgment is final and cannot be appealed. In theory, both countries have to accept the court's decision and adhere to it. Nevertheless, the Permanent Court of Arbitration in the Hague has no power to enforce the verdict.

At most, the signatories of UNCLOS could punish China with consequences regarding its rights as a member of three UNCLOS bodies: the International Tribunal for the Law of the Sea, the International Seabed Authority and the Commission on the Limits of the Continental Shelf.

The Permanent Court of Arbitration in The Hague has issued its ruling on the South China Sea row between the Philippines and China. But a solution to the dispute is not yet in sight, says DW's Philipp Bilsky. (13.07.2016)

China will ignore a ruling from an international court that it has no historical rights to islands in the South China Sea. Beijing made no secret of its intention to carry on building up forces in the disputed region. (13.07.2016)

A court in The Hague has ruled China breached international law in a dispute over control of the South China Sea. Its findings are binding, but the court has no power to enforce its ruling. Beijing remains unrepentant. (12.07.2016)