Did China commit 'crimes against humanity' in the South China Sea?

Former Philippine ministers say China's artificial islands in the South China Sea have destroyed the environment and decimated coastal communities. They have filed a formal complaint with an international tribunal. 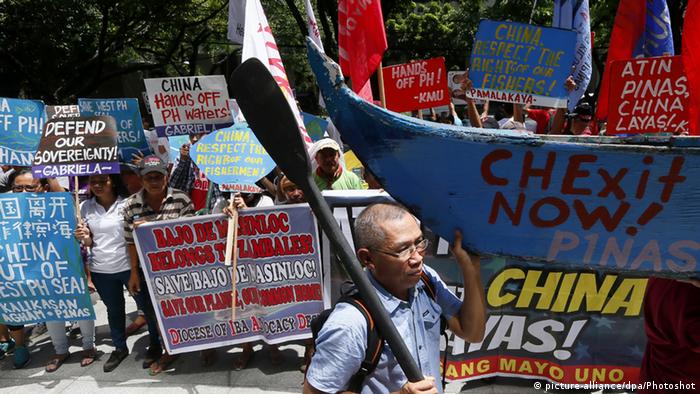 Two former Philippine government officials, along with a group of Filipino fishermen, filed a complaint last Thursday with the International Criminal Court (ICC) accusing China's President Xi Jinping of "crimes against humanity" for irreversible environmental degradation caused by China's construction projects on reefs and atolls in the South China Sea.

"It presents one of the most massive, near permanent and devastating destruction of the environment in humanity's history," said del Rosario in a statement. "This adversely affects not only 320,000 Filipino fishermen, but also present and future generations across nations."

"We demand accountability from those who destroy marine areas," said Carpio-Morales.

Since 2013, China has been building artificial islands on coral reefs for military installations in the South China Sea, which the Philippines calls the West Philippine Sea.

Does the ICC have jurisdiction?

The ICC complaint was filed two days days before the Philippines' withdrawal from the international tribunal took effect on March 17.

In a statement, Philippine presidential spokesman Salvador Panelo called the move a "futile exercise," adding that it would probably be dismissed because China and the Philippines are no longer ICC members.

However, del Rosario and Carpio-Morales insisted that the ICC has jurisdiction over China and President Xi.

They said Xi "committed the crime within Philippine territory," and emphasized that the complaint was filed before the Philippines left the ICC.

Since taking office in 2016, Philippine President Rodrigo Duterte has been building closer relations between Manila and Beijing. He said the ICC complaint would not affect relations with China.

China claims most of the South China Sea as its territory. An estimated annual $5 trillion (€4.25 trillion euros) in trade, and a third of all maritime traffic, passes through its waters. The area also reportedly has large deposits of oil and natural gas.

China, Brunei, Vietnam, Taiwan, Malaysia, Taiwan and the Philippines have overlapping claims in the South China Sea, and territorial disputes regularly erupt among the claimant nations.

Tension between the Philippines and China escalated in 2012, when the Chinese Coast Guard barred Filipino fishermen from fishing in Scarborough Shoal, an ancestral fishing ground.

Manila took the matter to the Permanent Court of Arbitration in The Hague. In 2016, the court ruled that China has no legal basis for its sweeping territorial claims over the entirety of the South China Sea.

However, President Duterte refused to enforce the historic ruling, arguing that his country does not want to go to war with China. Duterte's move seemed to improve relations with China. Philippine government officials reported that Filipino fishermen can now freely fish in Scarborough Shoal.

But fishermen say that the agreement between the two heads of state does not hold water in the high seas.

"Our fishermen are no longer being bombarded by water canons, their boats are no longer bumped by the Chinese Coast Guard, but the Chinese sailors take their best fish, give them cigarettes and noodles and call it a barter arrangement," Larry Artegame, chairman at the Alliance of Fishermen Victimized by Calamity and Climate, told DW.

Artegame added that Filipino fishermen are only allowed to fish around the Scarborough Shoal, but are not permitted to enter it and use it for shelter during stormy weather. "What our government offers is not sufficient for fishermen," he said. 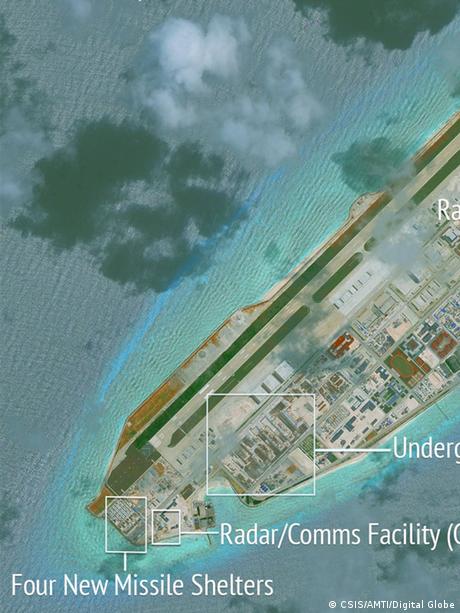 A satellite image of China's military installation on Spratly Island

The ICC complaint has been called a "patriotic move" and several Philippine legislators called for the public to rally behind it.

"In filing a case against Chinese President Xi Jinping, the complainants provided us with a powerful template of courage as we continue to assert our sovereignty in the West Philippine Sea," Philippine Senator Risa Hontiveros said in a statement.

Others were more guarded. Environmental lawyer Tony La Vina told DW that he cautiously supported the move. "It will have to be argued very well. It will be a challenge to convince the ICC to look into it."

The two former ministers acknowledged that they face an uphill battle.

"It may or may not work but at least we explored it. We are not happy with the way our people are being treated and we will look for every possible resource to get the treatment that we deserve," said del Rosario.