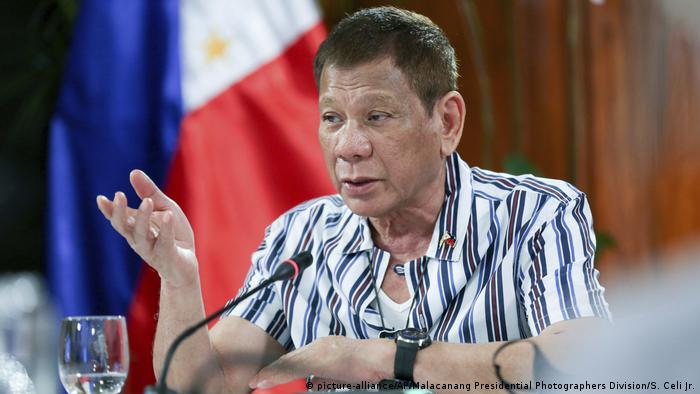 The Philippine president on Friday signed-off on a widely-opposed anti-terror law which critics fear could be used to target human rights activists.

President Rodrigo Duterte signed the controversial Anti-Terrorism Act after it was approved by Congress. Among other things, it allows Duterte to appoint a council that could order warrantless arrests of people it deems as terrorists.

"The signing of the law demonstrates our serious commitment to stamp out terrorism, which has long plagued the country and has caused unimaginable grief and horror to many of our people," Duterte's spokesman Harry Roque said.

The Communication Office of the President of the Philippines wrote on Twitter that the executive will "maintain the respect for human rights as we have ensured safeguards against abuse."

The law also allows for suspects to be detained for weeks without being charged. The government insists this is necessary to combat communist and Islamist insurgencies.

Opponents on social media have expressed outrage with the hashtag #VetoTerrorBillNow, such as Philippine advocacy group Silakbo.

Activists are skeptical of the motives and legality of the legislation, saying the definition of terror is vague and Duterte could use it as an excuse to clamp down on critics.

Prominent Philippine business leaders, many Muslims in the Catholic-majority country and UN human rights chief Michelle Bachelet are among those who urged Duterte to veto the bill. He signed the bill into law without making any amendments.

What does the law do?

The law defines terrorism as intending to cause death or injury, damage to government or private property or use weapons of mass destruction to "spread a message of fear" or intimidate the government.

Suspects could be held up to 24 days without charge, which opponents say violates a three-day limit set by the Philippine constitution. Critics allege the legislation also strips away old safeguards, such as penalties against law enforcement for the wrongful detention of suspects.

"The law threatens to significantly worsen the human rights situation in the Philippines, which has nosedived since the catastrophic 'war on drugs' began four years ago," Robertson added.

In a report last month, the UN human rights office said at least 8,663 people have been killed in the drug war with "near impunity" for offenders.