Philippine anti-terrorism law triggers fear of massive rights abuses | Asia | An in-depth look at news from across the continent | DW | 08.06.2020

New anti-terrorism legislation will give greater powers to authorities to arrest people without a warrant and carry out surveillance. Activists say the law is aimed at intimidating dissidents. Ana P. Santos reports. 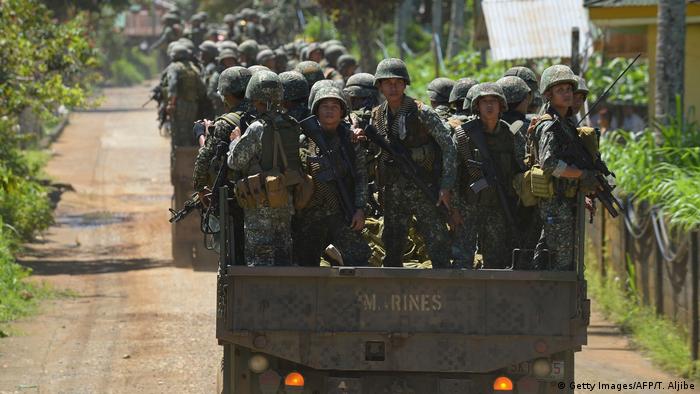 The Philippine government recently approved a contentious anti-terrorism bill that critics say is aimed at curbing civil liberties and silencing the opposition.

The 2020 Anti-Terrorism Bill is an upgrade of the Human Security Act of 2007, which the military says is outdated and insufficient to fight modern-day terrorism, which involves online recruitment and planning of terrorist activities.

The new measure enables security forces to arrest suspects without a legal warrant, hold them without charges for a longer period of time and wiretap them for up to 90 days. Additionally, there will be an anti-terror council in place to define what constitutes terrorism.

The Philippine military backed the new legislation, arguing that the existing anti-terrorism laws are not adequate to build a strong case against a terror suspect.

In a 2018 Senate hearing on the anti-terrorism bill, former army chief General Carlito Galvez Jr said that existing laws only allowed three days to build a case and charge a suspect. As a result, Galvez said, authorities had to release terror suspects.

President Rodrigo Duterte, who was set to sign the bill into law, dubbed it an urgent matter. But the bill could still be challenged in the Southeast Asian country's Supreme Court. According to Antonio Carpio, a retired Supreme Court justice, "the law deals with fundamental constitutional rights."

The bill was denounced by a large number of people in the Philippines. The hashtag #JunkTerrorBill has started trending on social media, with celebrities, government officials and even business groups expressing concern over it. Many fear the security forces could abuse their wide-ranging powers.

"The bill labels anyone who expresses dissent a terrorist. It will give authorities more reasons to punish Muslims who are wrongfully perceived as terrorists," Khads Sarael, a 20-year-old Muslim student who participated in a protest last week, told DW.

Supporters of the bill argue that there are enough safeguards in the new legislation to ensure freedom of expression. "Those who protest peacefully are not terrorists. Our constitution ensures peaceful rallies, as they are protected by the Bill of Rights," Secretary of National Defense Delfin Lorenzana said in an interview.

But rights activists are not convinced by this argument. They say the Duterte administration's human rights record is abysmal. The international community has been critical of the president's handling of his campaign against drugs, with rights organizations documenting systematic rights abuse, extrajudicial killings and arrests of citizens.

"There are very few safeguards in the law. In reality, we have seen this government's belligerence in dealing with any perceived opposition and its heavy-handedness to silence dissent," Kristina Conti of the Public Interest Law Center told DW.

Muslims will be targeted?

Legislators from the insurgency-hit southern Mindanao region have rejected the 2020 Anti-Terrorism Bill, fearing it would increase discrimination against the Muslim community.

Read more: The Philippines in the sights of IS

Hataman represents the southern province of Basilan, which is also the birthplace of the jihadist Abu Sayyaf Group (ASG).

"I have dealt with many cases of Muslims who are wrongfully arrested and detained," Hataman told DW.

"We support efforts against terrorism, but they should not be at the expense of human rights," he added.

Hataman is of the view that terrorism can be eradicated through dialogue, good governance, education and the provision of livelihood opportunities. "These are the programs that we need. Unfortunately, none of them is mentioned in the Anti-Terrorism Bill."

Zero Tolerance - The Philippines - In the Sights of IS