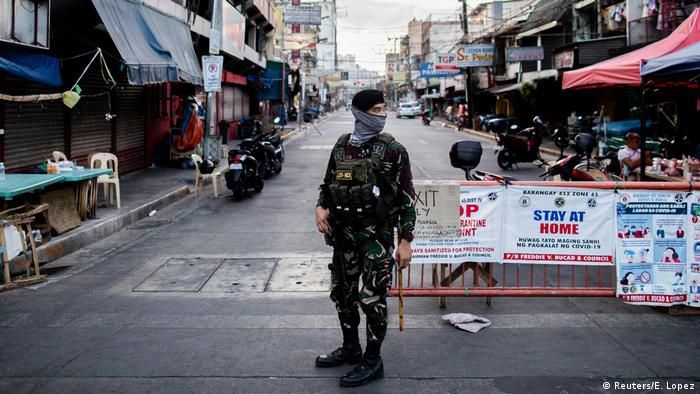 On April 19, three men showed up at Maria Victoria Beltran's house to arrest her. She asked them to show her the arrest warrant. "The officers said the warrant was at the police station. They threatened to handcuff me if I refused to go with them," Beltran told DW.

Just days before this incident, Edgardo Labella, the mayor of Cebu City in Central Philippines, had vowed to arrest Beltran for sharing a Facebook post describing her city as the epicenter of coronavirus infections "in the entire solar system."

It was a satirical post, albeit based on an alarming reality. More than 13,000 have reportedly been infected by the disease, and almost 850 people have died from it in the Philippines. The number of cases is on the rise in the Southeast Asian country, with local media reporting that an entire village near Cebu City was "presumed contaminated" because of the infection cluster there.

A new law to tackle the pandemic has given President Rodrigo Duterte's administration emergency powers to crackdown on people who are using social media and other platforms to spread "false information" about the COVID-19 crisis.

Crackdown on freedom of expression

The law has come under sharp criticism from human rights groups, but Harry Roque, a spokesman for Duterte, says that "freedom of expression is not absolute, it has limits."

Rights groups say that Beltran's arrest was another example of the government's abuse of power to hide facts about its mishandling of the coronavirus crisis.

"By arresting Beltran, the authorities wanted to threaten people who are critical of the government," said Leni Velasco, co-founder of the DAKILA artist collective. "People now think twice [before saying anything critical] and tend to self-censor."

Beltran was forced to pay $800 (€729) after being charged with violating the cybercrime law, spreading fake news and violating the law on mandatory reporting of certain diseases. After spending three days in police custody, she was released on April 21.

Beltran is an artist, filmmaker and a well-known figure in the Cebu artist community. Her restaurant, Kukuk's Nest, is frequently visited by city's intelligentsia. She was one of the 17 laureates from 14 countries who received the 2020 DW Freedom of Speech Award on May 3.

Beltran told DW that she had considered herself apolitical until President Rodrigo Duterte rose to power in 2016.

"I was appalled by Duterte's way of talking," Beltran said, adding that the president's "brutal" campaign against drugs made her angry.

Duterte, a populist leader, still enjoys popularity among the masses, according to recent surveys.

Telling DW about her time in detention, Beltran said she was handcuffed to a chair and was later moved to a cell with other detainees. Health measures meant to curtail the COVID-19 spread were compromised during her detention, she added.

Beltran also wrote a poem entitled "The handcuffs" about her experience in the detention.

"She didn't deserve to be treated that way for a sarcastic post," Stella Monteno, an artist, told DW.

Monteno recalled how Beltran's friends frantically searched for her after her arrest. "We were in a lockdown. Not being able to meet her and comfort her while she was in detention was painful for us."

Beltran is once again sharing witty Facebook posts as a "joke of the day." She has also filed a lawsuit against Mayor Labella.

"He [Labella] must be held accountable for my arbitrary arrest. It was just wrong," she said.