The Philippines in the sights of IS 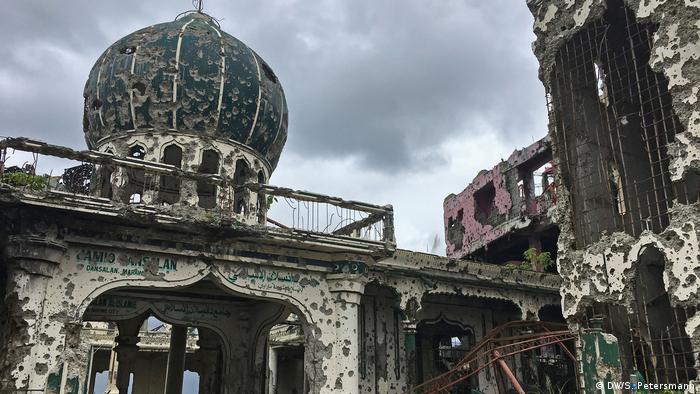 The Bato Ali Mosque was once a beautiful edifice with a distinct green dome. Now, only an ugly, bombed-out skeleton topped by a perforated minaret remains. The ravaged mosque stands out as a reminder of what happened here in the southern Philippines almost two years ago.

In the beginning everyone "thought it's a joke," recalls Norodin Lucman. He comes from one of the most influential Muslim families in the city of Marawi, where the black flag of the self-proclaimed "Islamic State" was on display for months. "How can you attack a city and take tens of thousands of civilians hostage?" But it happened. "This is how terrorism goes about its work," says Lucman.

The 'caliphate' in Southeast Asia

With just over 200,000 inhabitants, quaint Marawi is the largest Muslim city in the predominantly Catholic Philippines. It is idyllically located on the shore of Lake Lanao in Mindanao, the second biggest island of the Philippines.

In 2017, two local Islamist terror outfits, both pledging allegiance to IS, were determined to turn Marawi into the Southeast Asian capital of the "caliphate."

They only had a few hundred fighters but, between May and October, they managed to occupy the center of the old city. The IS jihadists murdered Christians, took hostages and entrenched themselves in mosques like Bato Ali.

The terrorists drew the Philippine armed forces into the toughest combat they had faced since World War II. In the end, it was the permanent air raids combined with the massive support of the US army that decided the fight. More than 1,200 people were killed.

Marawi 'only the beginning'

Today, the devastation in Marawi is just as great as the destruction in the Syrian city of Raqqa or Mosul in Iraq. The city will be rebuilt, it was promised. But reconstruction has barely begun. Tens of thousands of displaced people are still living in emergency shelters. Martial law applies across Mindanao. IS fighters have gone underground. When a lethal bomb attack ripped through a cathedral on Mindanao's small neighboring island of Jolo on January 17, 2019, IS said it was responsible. 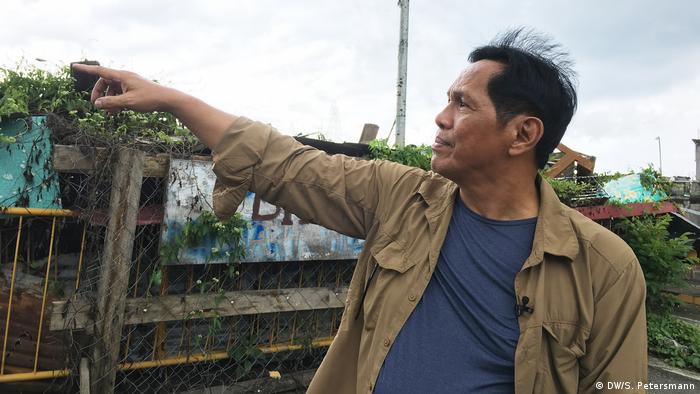 Marawi was "only the beginning," warns Norodin Lucman. As a clan leader, he enjoys great respect in the area. He knew some of the IS fighters in Marawi personally: angry, disaffected youngsters from his own neighborhood. On the 12th day of the siege, they allowed Lucman to lead more than 150 civilians out of the battle zone. Muslims and Christians.

The bombing and destruction of Marawi has "left a lot of misery behind. Resentment. Anger. Outrage. Every day," says Lucman. If the government doesn't take firm action to tackle the problem, "there will be another uprising," he tells DW as he talks about "the continuation of colonial war against our people.”

Mindanao and smaller islands to the south, such as Jolo, provide the backdrop for one of Asia's longest running conflicts. It's a bitter power struggle between the Christian majority that dominates the Philippine state and the Muslim minority. Only about 5% of the population is Muslim. Almost all live in Mindanao, which used to be run by powerful sultanates. That was before the arrival of Christian colonial settlers. 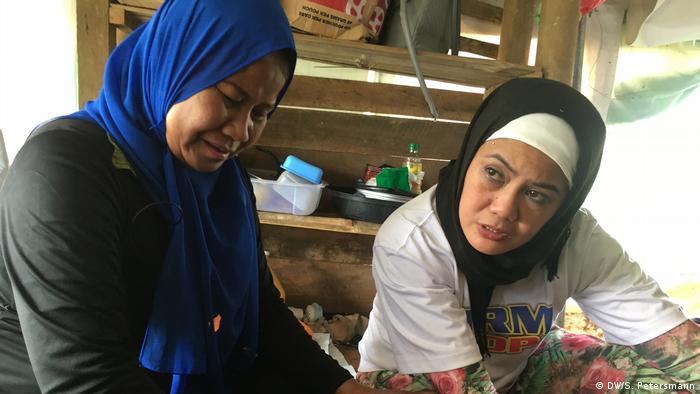 Like Norodin Lucman, Samira Gutoc sees herself as a representative of the discriminated Muslim minority. The 43-year-old politician from Marawi wants to become a senator. But for the past 25 years no Muslim has been elected to the Philippine Senate. But, she tells DW, "if we continue to believe that peace can only be achieved by men in uniform and at the national level, without involving the local population, Marawi will remain a failed experiment."

She accuses Philippine President Rodrigo Duterte of sacrificing Marawi in the fight against terror. "Marawi is an example of discrimination, of not allowing traditional indigenous mediation systems to be put in place." Gutoc believes Duterte was wrong to categorically reject negotiations with the local IS fighters.

A first step toward federalism

"I know that Duterte has a terrible reputation in Germany," Philippine political scientist Richard Heydarian tells DW. But, he adds, the president deserves credit for the path he has taken in Mindano: "He has really used the bullying power of his presidency and his own political capital to whiplash the Philippine political elite to support the Bangsamoro project."

Many Muslims in Mindanao speak of "imperial Manila" when they talk about their government in the distant capital. An autonomous Bangsamoro, scheduled to be realized within the next three years, effectively represents a first step toward federalism in this centrally governed island nation. Finally, we are seeing "an indigenous mechanism to problem-solve locally," says senatorial candidate Samira Gutoc. But there are caveats. 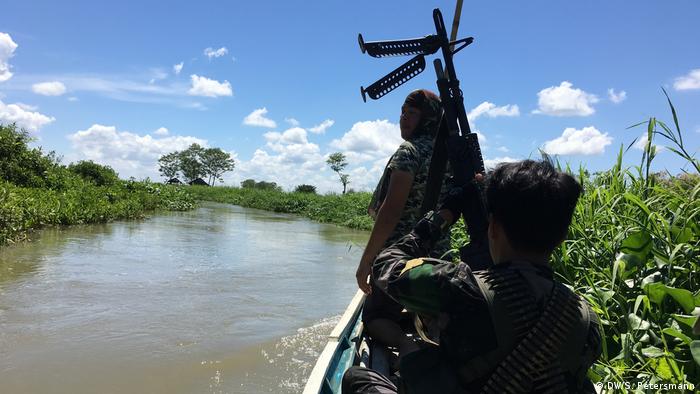 Between rivalry and corruption

Four decades of civil war, with more than 120,000 deaths, have left an indelible mark. Mindanao's Muslim majority areas are among the poorest and least developed in the Philippines. So, what happens if the autonomy drive does not deliver tangible results quickly enough?

"When IS in the Middle East decided to name an emir in this region, they didn't choose an Indonesian or Malaysian. They chose a Filipino," academic Richard Heydarian says. "They believe the front is in the south of the Philippines," and not in Muslim nations like Indonesia or Malaysia. 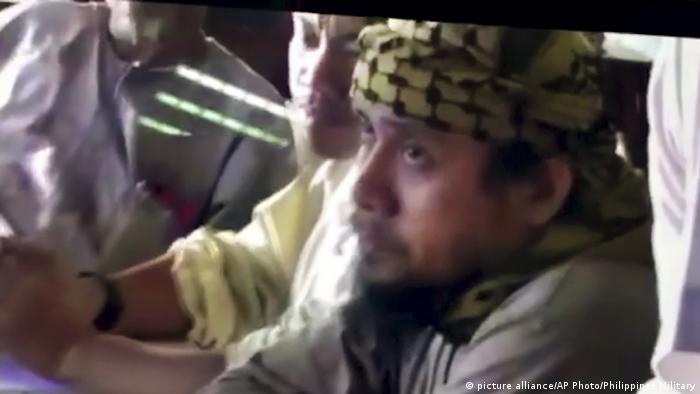 IS chose terrorist Isnilon Hapilon of the Philippines as their "emir" in Southeast Asia. He was killed in the battle of Marawi

Only the Philippines provide the narrative of a mainly Christian state with an impoverished Muslim minority. After the fall of the IS caliphate in Syria and Iraq, Mindanao could become increasingly attractive for foreign fighters. Large jungle and marsh areas offer ample space to hide out. "This is another fallback option for them to have a chance for redemption, jihadi redemption if you want to call it that," argues Heydarian.

What's more, the island is also easily accessible by boat from Indonesia and Malaysia. The two neighboring countries are battling their own Islamist terror cells. Jihadis from both these countries were among the IS fighters in the Middle East and in Marawi.

A priest held hostage by jihadis in Marawi has been freed by Philippine troops. His rescue comes as the Philippine military makes fresh advances against Islamist militants. Ana P. Santos reports from Manila. (19.09.2017)

At least five soldiers and three Abu Sayyaf militants were killed in the fighting as the military presses forward with a new offensive in the country's south. The clashes come after 22 people died in a cathedral bombing. (03.02.2019)