The UN said that President Duterte's war on drugs in the Philippines has sparked widespread killing with "near impunity" for offenders. The report called for an independent probe into human rights abuses in the country. 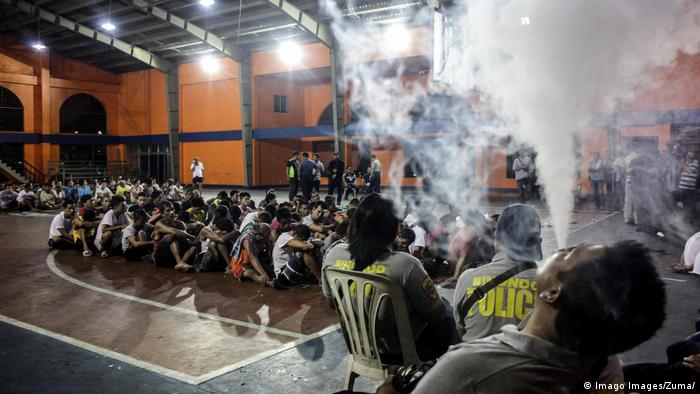 Human rights abuses in the Philippines have worsened under President Rodrigo Duterte, with police and vigilantes encouraged to use lethal force in the country's war on drugs, the UN human rights office said in a new report published Thursday.

Duterte's "harmful rhetoric" and "incendiary" language combined with his government's "heavy-handed focus" on fighting illegal drugs and threats from insurgents has led to numerous deaths, arbitrary detentions and a suppression of dissent, the report said.

"Despite credible allegations of widespread and systematic extrajudicial killings in the context of the campaign against illegal drugs, there has been near impunity for such violations," the report said.

The report was requested by the UN Human Rights Council last year and is based on court and police records, interviews with victims and witnesses as well as government input.

Death toll could be 'triple' than official figures

Official figures show that over 8,600 people have been killed in Duterte's campaign against illegal drugs since 2016, "with some estimates putting the real toll at more than triple that number."

Despite the number of deaths, officers have only been convicted for the 2017 killing of 17-year-old Kian delos Santos.

Police raids against drug suspects were also "routinely carried out without warrants" and police reports on their operations also indicated that evidence may have been falsified.

The report also found that at least 248 legal professionals, journalists, human rights defenders and trade union members have been killed due to their work between 2015 and 2019.

Due to the Philippines' failure to ensure accountability, the UN report called for an "independent, impartial, credible investigations into all allegations of serious violations of human rights and international humanitarian law."

Michelle Bachelet, the UN High Commissioner for Human Rights, said that the "deep-seated impunity" revealed in the report means that victims and their families have been deprived justice.

"People who use or sell drugs do not lose their human rights,'' she said.

Duterte's government has long denied that it has a policy to kill drug suspects, with presidential spokesman Harry Roque saying on Thursday that the UN report was baseless.

The president himself has frequently encouraged violence, including remarks him made shortly after taking office in 2016 when he said: "If you know of any addicts, go ahead and kill them yourself as getting their parents to do it would be too painful."

Duterte has also frequently threatened independent investigators who are probing the killings, as well as blocking them from entering the Philippines.

The Supreme Court has ordered the release of thousands of police documents related to President Duterte's war on drugs. Lawyers and activists dubbed it an important but partial victory. Ana P. Santos reports from Manila. (05.04.2019)

Maria Beltran, a recipient of DW's Freedom of Speech Award, was detained in April for a satirical Facebook post. Activists say her arrest was proof that the Philippine government wants to hide facts about COVID-19. (21.05.2020)