President Martin Vizcarra has dissolved the opposition-controlled Congress, which he accuses of stonewalling attempts to curb widespread corruption. Opposition lawmakers have voted to suspend him in response. 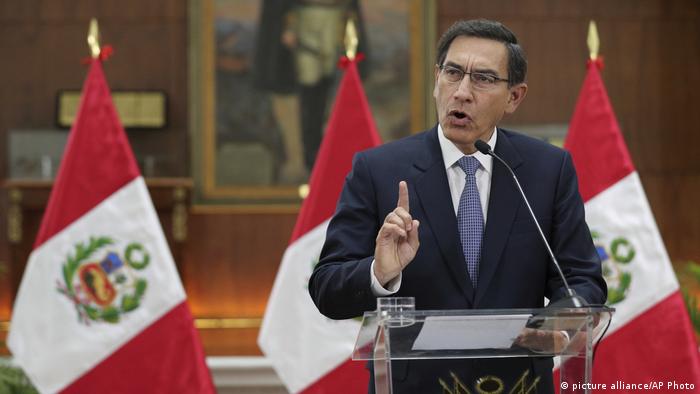 Peruvian President Martin Vizcarra has dissolved his nation's opposition-controlled Congress and called new elections — escalating a bitter feud over what he has referred to as his fight to curb corruption. The stunning development came hours after the Fujimorist-dominated Congress pushed forward a vote to select an almost entirely new slate of magistrates to the Constitutional Tribunal over the objection of Vizcarra, who took office in 2018.

In a televised address late Monday, Vizcarra said that the constitution permitted his decision and that fresh elections were necessary to tackle graft. "It is clear that the obstruction and shielding do not stop and there will not be an agreement possible," he said.

The embattled president said he would "seek to put an end to this era of political deadlock that has held Peru back from growing in proportion to its possibilities." He added that he hoped "this exceptional measure will permit the citizenry to finally express themselves and define, at the polls and through their participation, the future of our country." Vizcarra told the people of Peru that they are "making history — and this moment will be remembered by generations to come."

Later, opposition lawmakers, who largely come from the neoliberal nationalist Popular Force party, said Vizcarra had overstepped the bounds of the constitution and voted to suspend him on the grounds of his "permanent moral incapacity." They swore in Vice President Mercedes Araoz as his replacement, though the vote appears to have only had symbolic value since Vizcarra dissolved the legislature.

Late Tuesday night, Araoz announced on Twitter that she was declining the role of interim president and resigning from her vice presidential post in order to help usher in new general elections. She cited a statement from the Organization of American States' that says the Constitutional Tribunal is solely responsible for settling a dispute of the legality of President Vizcarra's decision to dissolve Congress.

His predecessor, Pedro Pablo Kuczynski, resigned to avoid impeachment in 2018.

Some lawmakers even vowed to physically resist any attempt to send them home, remaining in their seats late into the night. Under Peruvian law, the president has the right to dissolve Congress if lawmakers reject two votes of confidence. One has already taken place, but the second has stalled — many moderate and left-wing lawmakers believe strategically so.

Vizcarra said Peruvians could help put an end to corruption. "When they do so, I hope they remember the magnitude of this fight, which is against one of the endemic evils that has done so much damage to Peru and not permitted it to grow as it deserves and how we deserve, all Peruvians," he said late Monday. He added that the country "will continue to find in this president a leader who is profoundly respectful of the constitution and always prepared to take the fight to corruption."