Some 227 skeletons have been found in the coastal Peruvian town of Huanchaco. Researchers believe the children were sacrified to bring an end to the El Nino weather phenomenon. 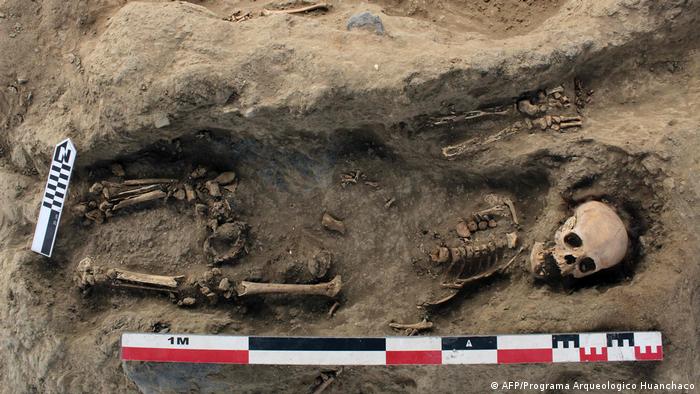 Archaeologists in Peru told the press on Wednesday that they had unearthed what may be the largest-ever child sacrifice in the world, having found 227 bodies so far. The Chimu people, who lived in what is today Peru from 900 AD until about 1400, sometimes ritually killed children in religious ceremonies.

"This is the biggest site where the remains of sacrificed children have been found," Feren Castillo, chief archaeologist at the dig in Huanchaco, told French news agency AFP.

Chimu people sacrificed both children and adults for different reasons, but Castillo said in this case he believes they were killed in hopes it would appease the gods and bring an end to El Nino, a cyclical climate pattern that can result in heavy rainfall and storms on the western coasts of South America. His theory is backed up by the fact that soil samples show that the children died during an extremely wet season, and that they were facing the sea.

The Chimu are famous for their capital, Chan Chan, the largest adobe city in the world, their development of advanced farming techniques and hydraulics, and the prestigious place artisans were awarded in their society.

In recent decades, scientists have made several gruesome discoveries relating to human sacrifice carried out by the Chimu. In 1997, archaeologists unearthed the bodies of approximately 200 people from what has come to be known as the "Punta Lobos massacre" after the modern area in Peru where they were found. The bodies were determined to be mostly fisherman, likely sacrificed to around the year 1350 after the Chimu conquered their fertile seaside valley.

Evidence of ritual human sacrifice has been uncovered all over the world, including in pre-modern Europe, the Middle East, and Africa. The practice is specifically referred to and banned in the Hebrew Bible.

Thousands of visitors each day make the trek up to the ancient Inca ruins deep in the Andes mountains. The restrictions are a trial to see if damage can be limited to Peru's principal tourist attraction. (11.05.2019)