An icon for over half a century, Patti Smith remains an enigma to those who try to pigeonhole her. At 75 years young, Smith continues to find poetry in unlikely places. Happy birthday to the reluctant Godmother of Punk!

Some have called her the Godmother of Punk, others the Grande Dame of Alternative Rock. But what Patti Smith really is, deep down in her heart, is a poet. Her music takes second.

Born on December, 30, 1946, in Chicago, Smith grew up in New Jersey together with three siblings. While her father was an atheist, her mother was a Jehovah's Witness, raising her kids to be religious.

She wanted to become a teacher. During her studies, she got pregnant and had the baby, but gave it up for adoption. Then she quit her studies, and — not even 20 years old — found her way to New York's art scene where she got involved in art, drugs, parties and music.

Back then, her idols were the poets Charles Baudelaire and Arthur Rimbaud, and the musicians Jimi Hendrix, Brian Jones and Jim Morrison.

Poetry in a punk club

In clubs and bars, Smith opened for rock bands by reciting her poems on stage. She had her first big performance in February 1971. As part of a planned poetry series, Smith recited her work for New York stars like Allen Ginsberg, Andy Warhol, Lou Reed, Sam Shepherd and others, eventually publishing two volumes of poetry.

During that time she also jammed with guitarist Lenny Kaye and keyboarder Richard Sohl. 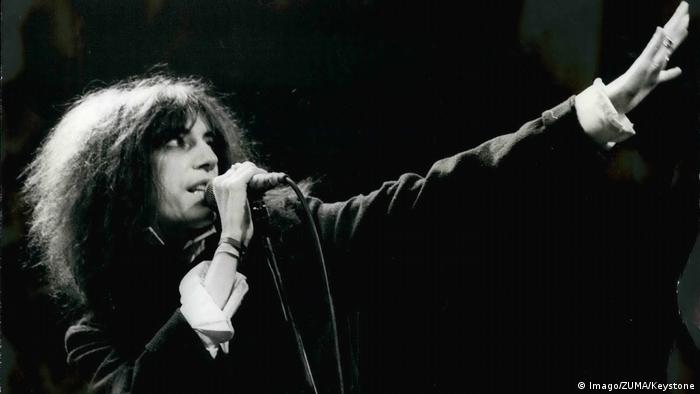 "Our songs consisted of three chords," she told the US radio magazine "Fresh Air" in 2006, "so that I could improvise on them."

The three musicians kept playing around with Van Morrison's song "Gloria" for a long time until Smith decided to work in her famous poem "Oath" into that song:

"Christ died for somebody's sins, but not mine (...) Christ, I'm giving you the goodbye, firing you tonight. I can make my own light shine."

The reference to her mother's suffocating religiosity could not be overlooked.

The birth of garage rock

In 1975, the Patti Smith Group was complete. The first album, "Horses," was created with the help of producer and Velvet Underground veteran John Cale. On the cover, Smith looks androgynous with dishevelled hair — slim, clad in a men's shirt and jacket, and wearing a black ribbon looking like a loose tie. 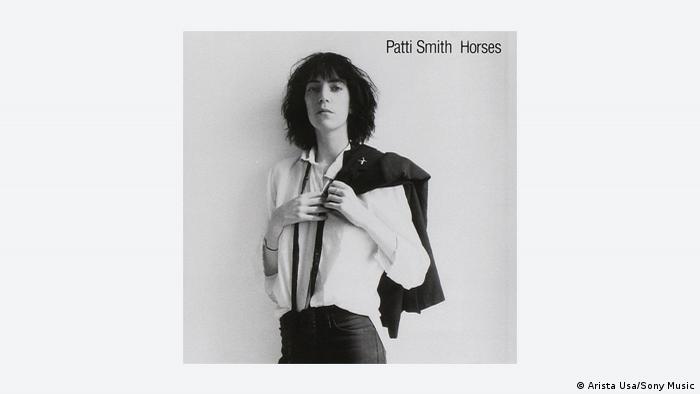 The album contained pure poetry, sometimes loud and uncontrolled, sometimes intense and enchanting. Smith made full use of her voice, implementing melody, rap, recitations and improvisations.

"Horses" made it into the charts as the very first so-called new underground album. The magazine "Rolling Stone" included the disc in its list of 500 best albums of all time.

Reacting to Smith's wild performances, the music world put her squarely in the punk box, and even called her the Godmother of Punk. In an interview with BBC, she later said she regretted having been given all kinds of titles, like "princess of piss," or "wild rock 'n' roll mustang."

She also said she and her band were never really punk. And yet, Smith definitely played a key role in punk - at least in the US. Yet the essence of Smith's music wasn't anarchism and nihilism, but rather the firm belief that rock 'n' roll could change the world - just as her rock heroes of the 1960s had demonstrated.

Even today, "Horses" still stands for music that comes from the streets, transports dirt and feelings, and is ruthless, honest, unsparing and uncomfortable. Smith said she speaks to those who are like her - the disenfranchised, the mavericks - and tells them, "Don't lose heart, don't give up."

A break after 'Frederick'

The second album of the Patti Smith Group, "Radio Ethiopia" (1976), wasn't quite as successful. According to some observers, Smith was overdoing it a bit with her intensity that at times bordered on "extravagant confusion" ("Rock Rough Guide"). At the same time, though, the album was respected for its rough rock sound.

In 1978, the album "Easter" followed with Smith's first big commercial hit. She released "Because the Night," with some support from Bruce Springsteen. It became her international breakthrough, and was followed by even more hits. The album "Wave" (1979) contained two famous songs, "Dancing Barefoot," and "Frederick," both lacking some of Smith's original wildness.

After that, Smith's musical life came to an end - for a while, at least. With her husband Fred Smith and their children, she withdrew into family life. Once again, she wrote poems, and in 1988 she produced a record with her husband that nobody wanted to listen to.

The mid 1990s were a dark period for her, as, within a few months only, she lost her husband, her best friend, and her brother. She also went broke - but was not forgotten. After all, she always continued to fascinate musicians, among them Kurt Cobain and Michael Stipe of R.E.M. So she started to perform again, here and there, as old friends started calling on her once again.

And then came Bob Dylan

Finally, Bob Dylan brought her back into the limelight. Smith reactivated her old band, and before they knew it they were opening for Dylan's show. The audience was thrilled. Twenty years after the release of "Horses," the band returned into the studio to produce the album "Gone Again" - a collection of somber and touching songs in memory of her deceased husband.

Smith still continues to produce music today. Her hair has turned grey but the power of her songs hasn't diminished a bit. Whether she sings her old hits, attempts to cover rock classics like "Smells like Teen Spirit" by Nirvana, she remains a poet who transports her verses via music.

Patti Smith will croon in place of Bob Dylan at the Nobel Award ceremony on December 10. Dylan himself will not be attending the event in Stockholm.

Patti Smith never wanted to be a punk rock icon, but her music had a strong influence on rock music in the 1970s. "Three chord rock merged with the power of the word" - that's how she described her style. (30.12.2016)