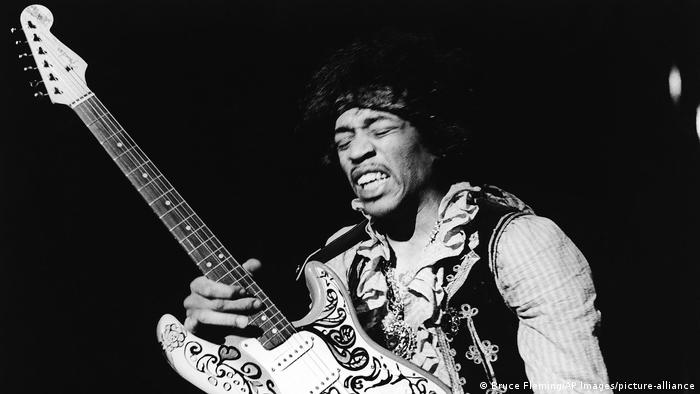 It must have felt like a force of nature to experience Jimi Hendrix live on stage in the late 1960s. Even Paul McCartney once said in an interview that still today he feels a shiver run down his spine whenever he thinks of the first time he saw Hendrix play at a London night club.

In 1966, Hendrix had moved from the US to London, where music producer Chas Chandler was in the midst of gathering together a band centered around the exceptionally talented performer, who was only in his mid-20s then. 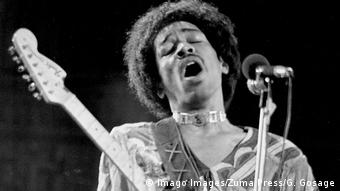 When Hendrix took to the stage, he played the guitar with every fiber of his being

Hendrix was born in Seattle in 1942, and was raised mainly by his father Al, since his mother struggled with family life.

Already as a child, Jimi was crazy about playing the guitar. Coming from a poor background, he never considered going to college, and joined the army in 1961 instead, a way for young Black men to make a decent living.

But after spending only one year with the paratroopers, Hendrix broke his ankle during a jump and had to be discharged from duty. That's when Hendrix started to accompany different R&B bands.

He went on tour with the Isley Brothers, Little Richard and many other stars of those days; his turf was the so-called Chitlin' Circuit, an association of African-American dance clubs dotted across the eastern and southern United States. His start in the music business was anything but easy, yet Hendrix got to learn from some of the best and fiercest performers of his time.

A hippie with a dark side

It was during this time that Hendrix developed his flamboyant style. On stage, he was expected to wear a suit, as still was common at that time, but in his private life, Jimi Hendrix donned a peacock feather in his hat and wore thick chains around his neck. His lanky figure also helped him draw attention both on and off stage, with some Cherokee heritage on his mother's side of the family also contributing to his enigmatic looks.

People believed him to be shy, but with his friendly and approachable demeanor and a wry smile on his lips, Hendrix soon became one of the the most charismatic performers of his time. Above all, he had the ambition to match his artistic vision.

During the brief period he spent living in New York, Hendrix had several intimate relationships at the same time. He and his circle of friends were already living the Greenwich Village hippie lifestyle, long before it became a global trend. But Hendrix revealed a completely different facet to his personality whenever he drank. Fueled by alcohol, he often was seen having major outbursts of rage, even engaging in physical fights. 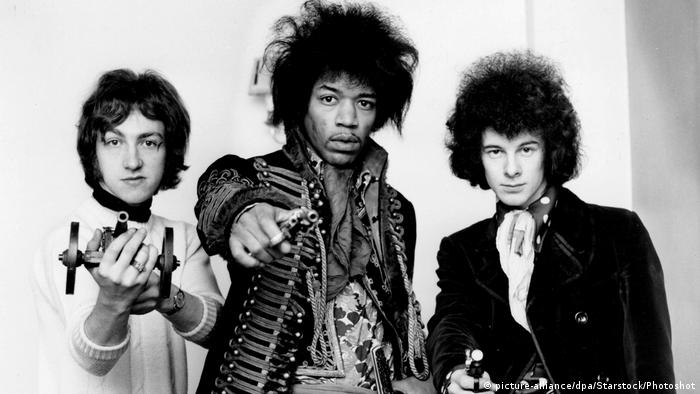 From the US to the UK — and back

Around this time, British talent scout and music producer Chas Chandler, a former member of The Animals, discovered Hendrix through a performance at the legendary Café Wha?. Eager to make him a star, he flew Hendrix over to the UK, joining him up with drummer Mitch Mitchell and guitarist Noel Redding on bass.

The trio however sounded more like an entire quintet due to the virtuosity of Hendrix's technique and the masterful sounds he managed to produce on his guitar effortlessly. The band became known as the Jimi Hendrix Experience, combining American and British blues styles with R&B and rock. The sound combined hard rock and groovy elements; it was sexy and psychedelic at the same time.

The trio caused a sensation in the UK, with everyone from the Beatles to the Rolling Stones going out of their way to see them perform live.

The first US tour of the Jimi Hendrix Experience was also a hit. One of Hendrix's greatest performances was his appearance at the Monterey Pop Festival in 1967. From then on, he was also considered basically a national treasure in his home country. He quickly became the next big superstar, with his sound perfectly matching the era of great upheavals. 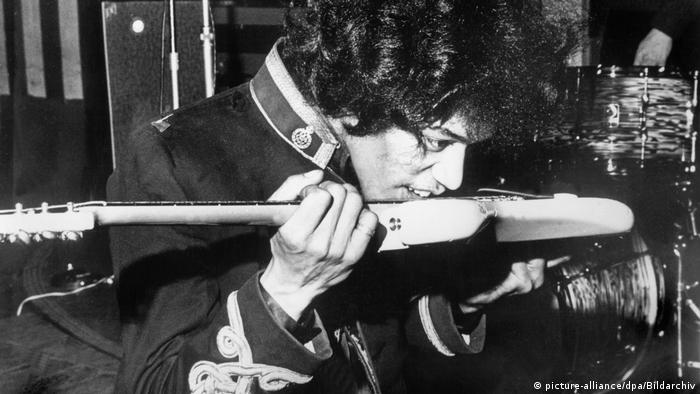 Demanding attention — but only on stage

Hendrix was a non-conformist in every respect, not only when it came to his songwriting but also his style of guitar playing: Despite being left-handed, he used right-handed guitars, which he simply flipped around and restrung in the opposite direction. He performed blues solos and guitar riffs with a kind of passion and devotion that had never been seen before.

His entire body was united with his music; he would sway his hips, fall on his knees, lie on his back, and play whole entire passages of music with his eyes closed. For effect, he would also pluck the guitar behind his head or using his teeth.

He was also known to go overboard at times, ramming his Fender Stratocaster into the amplifier or igniting it with lighter fuel.

One interviewee in the documentary film Jimi Hendrix: Hear My Train A-Comin' directed by Bob Smeaton says that Hendrix was only truly interested in two things in life: music and women. 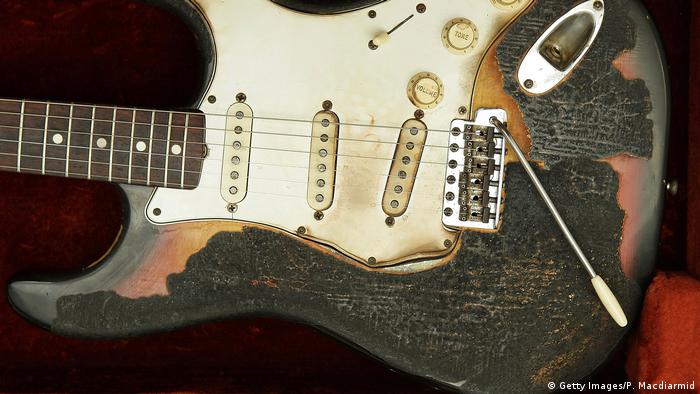 But in private, Hendrix was the opposite of a wild stage performer. He was more than just a musician: Jimi Hendrix was a real music nerd. Even before getting dressed in the morning, he would habitually strap on his guitar and make breakfast with the instrument attached to his body.

He would use every available moment to compose new music. Later in New York, Hendrix made a lifelong dream of his come true by having his producer, Eddie Kramer, set up his own $1 million studio for him and his band, the Electric Lady Studio.

With his studio, Hendrix became known for being a real stickler: He would record certain songs up to 35 times — even if the first take was already good. But the success of his self-produced third album, Electric Ladyland, proved he had been right to pay such attention to detail: The album soared to number one in the US billboard charts, making Hendrix the highest-paid musician of his time. 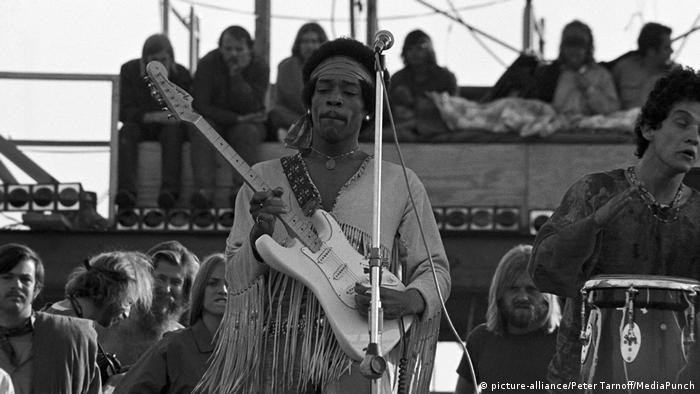 By the time he played at Woodstock, Jimi Hendrix had become a global icon

From rock star to global icon

At the legendary Woodstock Festival in 1969, Hendrix once more succeeded in wowing the crowds, playing a version of "The Star-Spangled Banner," the US national anthem, that struck the heart of the nation at the time: After playing the first couple of notes in a straightforward manner, using nothing but his Fender Stratocaster and an effects unit, he suddenly veered off into a creating soundscape mimicking bombs being dropped and machine guns being fired — a clear reference to the Vietnam War.

Standing on stage with his headband and wearing a frayed jacket, Hendrix became an icon of counterculture at Woodstock. Like a modern version of Apache tribe leader Geronimo, he was seen to embody the virtues of the native Americans, the suffering of African-Americans and the peaceful protest of hippie movement, all at the same time.

Hendrix continued to resolutely pursue his artistic vision, expanding the boundaries of sound and musical styles along with his new band, The Band of Gypsys. However, the record sales failed to reflect his enthusiasm. Giving in to commercial demand, Hendrix revived The Jimi Hendrix Experience albeit with a few changes: On bass, he introduced his old friend Billy Cox, whom he had met during his army days and who was already part of the Band of Gypsys. Things appeared to be going well.

On September 6, 1970, Hendrix gave his final performance at the Open Air Love & Peace Festival on the Isle of Fehmarn in West Germany.

Less than two weeks later, tragedy struck and Jimi Hendrix was found dead in London on September 18. His girlfriend had apparently given him some sleeping pills to help with his insomnia; however, he had accidentally overdosed on the tablets, as the prescription was stronger than what he had been used to back in the US.

Jimi Hendrix's rise to global fame lasted just four short years, but during this brief period he managed to change the science of guitar playing forever. There are definitely other guitarists in the world who can play cleaner, faster or even with more virtuosity than Hendrix, but for many, he is still considered the best rock guitarist of all times. And it was the man behind the guitar that was the real icon.