Best known as the Beatles bassist, McCartney's long career has made him one of the most successful musicians and composers in the pop music industry. Here's a look at his many accomplishments.

It's difficult to say whether or not the Beatles would have become the most famous band in the world without bassist Paul McCartney. But while his name may go down in history tied to the famous group, McCartney's solo career was much longer than the time he spent with John Lennon, George Harrison and Ringo Starr.

During his time with The Beatles, McCartney distinguished himself as an outstanding composer and first-class bass player. His trademark instrument was Höfner's left-handed bass, which he always had in hand. His hit tune "Yesterday" is considered the most-played song in the world and has inspired countless cover versions.

Life after The Beatles

After The Beatles separated, McCartney retired to his home in Scotland and recorded his first solo album on a four-track recorder. His first record, simply titled "McCartney" was released in 1970.

Paul McCartney in a morphing video

Paul McCartney in a morphing video

The album reached number one on the US charts and number two in Great Britain. The title song, "Maybe I'm Amazed," has been covered by numerous artists and is still part of McCartney's live repertoire, where it remains an audience favorite.

Together with his late wife Linda, he founded the group The Wings in 1971. One of the greatest successes came two years later when "Live and Let Die" became the title track of a James Bond film starring Roger Moore. The song even earned him an Oscar nomination.

The band had many top 10 hits and toured regularly until 1981, when they went their separate ways.

Alongside his pop music career, the ex-Beatles member is an environmental and animal rights activistand has even made a name for himself as an artist. Museums around the world regularly exhibit his paintings and drawings.

In 1991, McCartney composed the first of several classical pieces for the Royal Liverpool Philharmonic Society.

Inside the private life of a pop star 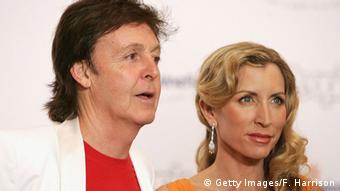 In 1998, his wife Linda, the mother of his three children, died. Four years later, McCartney married ex-model Heather Mills. The marriage ended spectacularly, and after an excruciating public separation, the couple divorced in 2008.

McCartney paid 32 million euros ($35 million) in the settlement, a drop in the bucket for a musician considered to be the wealthiest in the world. On October 9, 2011 McCartney married his current wife, Nancy Shevell.

Paul McCartney is a five-time recipient of the British Ivor Novello Award and is considered to be one of the most successful composers and interpreters in the field of pop music, according to the Guinness Book of World Records. He has sold over one hundred million singles and celebrated 60 gold records.

In 1965, he was made a Member of the Order of the British Empire, which was considered a scandal at the time. In 1997, the Queen of England made him a member of nobility, giving him the title of Sir Paul McCartney.

When will he slow down? 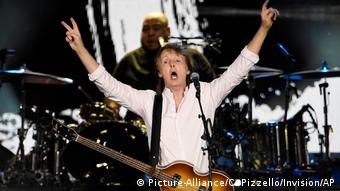 After many decades of musical success, Paul McCartney has certainly taken his place among the greats of music history. His affinity for classical music had a great impact on the music of The Beatles, which freed pop music from the stigma of banality in the 1960s.

Will he still be on stage at 80? "Unimaginable," he told the US magazine Rolling Stone last year.

This article was previously published in German on May 28, 2016 with the title "Never tiring: Paul McCartney begins a Europe tour." It has been re-published in honor of his 75th birthday.

Some artists seem to not be content being successful in only one area. Especially among pop musicians, it seems to be fairly common for them to paint as well as to pursue their music. One such artist is Paul McCartney. (28.04.2017)

Paul McCartney turns 75: Will he ever slow down?

Paul McCartney is one of the most successful musicians in the music world. After The Beatles disbanded, McCartney embarked on a successful solo career. Here's a look at some of the highlights. (16.06.2017)