Some artists seem not to be content finding success in only one area. It's fairly common for some performers, especially pop musicians, to paint in addition to their music. One such artist: Paul McCartney.

He never wanted his success as a musician to affect how people viewed his paintings. As confidently as Paul McCartney has promoted himself and his music, he has remained markedly modest when it comes to his second passion - painting. That is why a large number of his paintings remained hidden from the public eye.

He was interested in painting even as a kid. He allegedly garnered an art prize in school at the age of 11. However, it wasn't until 1983, at the age of 41, that he began to paint on a regular basis. It is said that the American painter Willem de Kooning, a friend and famous Expressionist, encouraged McCartney to paint and markedly influenced his style.

Yet, his works were never shown in public, remaining stored away in his basement. He only spoke occasionally about his painting passion during interviews, but it was one of those interviews that sparked the interest of Wolfgang Suttner, art consultant for the western German city of Siegen. Suttner said he was interested in showing McCartney's paintings.

Small stage for a big star 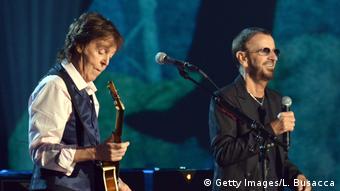 Some people had already tried the same. McCartney, however, was pleased that art expert Suttner was not interested in his fame, but wanted to examine his artwork more closely. McCartney felt he was being taken seriously as a visual artist and invited Suttner to Britain. And the rest was history: the city of Siegen made headlines in 1999 as host to the first exhibition ever of superstar Paul McCartney's work. It was appealing to McCartney - with no experience showing his artwork - to start out on a small scale.

Art experts describe his work as expressionistic and somewhat surreal. Although it can't compete with the works of the major expressionists and great artists in the world, they say it is good enough to go on show elsewhere - such as in New York and London. Yet, even if McCartney doesn't like it, limited and signed prints of his paintings are sold for several thousand dollars each - something that likely also has to do with his fame as a musician.

Take a look at the picture gallery to see some of the other musicians who have tried their hand at painting.

Some artists seem to not be content being successful in only one area. Especially among pop musicians, it seems to be fairly common for them to paint as well as to pursue their music. One such artist is Paul McCartney. (28.04.2017)