Pashtuns rise up against war, Taliban and Pakistani military | Asia | An in-depth look at news from across the continent | DW | 09.04.2018

Pashtuns rise up against war, Taliban and Pakistani military

A new movement has sprung up in Pakistan's Pashtun-dominated northern areas. Its supporters, wary of their region being used as a battleground for years, have taken on both the Taliban and the nation's powerful military. 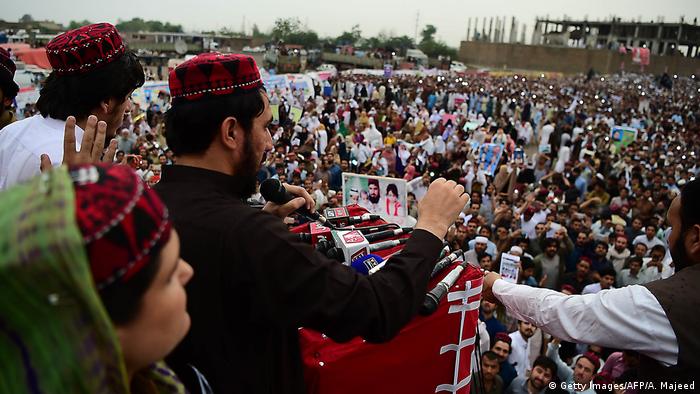 On May 15, it will be 30 years since the Soviet troops pulled out from Afghanistan, leaving the war-ravaged country to the mujahideen (Islamic warriors). Thousands of people had died during the 1980s Afghan War, in which the mujahideen were backed by the Pakistani military and the US. What followed the Soviet withdrawal was even more mayhem and bloodshed, with competing jihadist factions fighting for control over the capital Kabul.

The infighting ceased in 1996, when a group of Islamic students on both sides of the porous Afghanistan-Pakistan border captured Kabul, allegedly with the help of Pakistani authorities. A deadly calm prevailed for some years, but massive human rights violations continued until 2001, when the US avenged 9/11 terrorist attacks by bombing Afghanistan and ousting the brutal Taliban regime.

For a brief period of time, Afghans had hoped their country would finally experience peace. But the ensuing civil war, which continues to date, has killed thousands more.

The battle for Afghanistan continues. The Afghan and Pakistani Taliban, who Kabul and Washington say receive support from the Pakistani army and its Inter-Services Intelligence (IS) agency, control vast swathes of territory in the war-torn country. On the Pakistani side, the tribal areas along the Afghan border continue to suffer due to Islamist activities and the security forces' operations that caused deaths and displacements on a large scale.

At the heart of these never-ending wars, Islamic extremism, militancy and human suffering have been the Pashtuns, who are in a majority in Pakistan's northern parts and most of Afghanistan. Since the 1980s, at least three generations of Pashtuns have paid a heavy price for a conflict that was thrust on them from the outside. First, the Cold War rivalry between the former Soviet Union and the United States turned their territory into a war zone, and then the battle between the West and Islamists made them homeless, destitute and helpless. 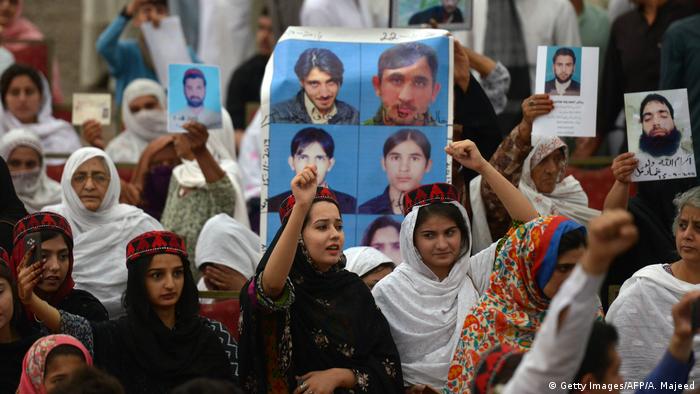 Now a secular movement, led by young activist Manzoor Pashteen, has struck a chord with thousands of Pashtuns, who say "enough is enough." The Pashtun Tahafuz Movement (Movement for the Protection of Pashtuns, PTM) blames both the Pakistani military and Islamists for the destruction in their region.

Essentially an anti-war campaign, the PTM sprang up as a result of the killing of the 27-year-old Naqeebullah Masood, who was killed by police in the southern city of Karachi on January 20. The authorities claimed Masood had links with militants, a charge his family and civil society activists deny. Rights groups say that thousands of Pashtun youths have been murdered or abducted by security agencies in the past decades on unproven terrorism charges. State authorities use the pretext of war on terrorism to persecute Pashtuns, they say. Over the years, Pashtuns have been branded as Islamists, or militants, due to the fact that the Taliban are also a Pashtun-dominated outfit, and because the radicalism in the country's northern areas has spiked over the years as a result of decades-long wars.

PTM leader Pashteen doesn't mince his words and has made it clear who he holds responsible for the Pashtun suffering: "We have to identify the place that destroyed us," Pashteen said at a recent rally. "It is GHQ!" he said, referring to the Pakistani military headquarters in Rawalpindi.

Ali Wazir, a central PTM official, said the movement demands an "end to enforced disappearances, constant insults to the Pashtun people, and violations of our rights."

"The authorities should launch a probe into extrajudicial killings [of our people]. They must drop the 'good and bad Taliban' policy that has harmed the region," Wazir told DW, referring to the Pakistani military establishment's alleged policy of distinguishing between the "good" Taliban groups that support its geopolitical view and the "bad" Taliban who have turned against the Pakistani state in the past few years.

The PTM has thus irked the Pakistani military establishment, which has recently tried to appease the movement by releasing some activists, according to Pakistani media.

"We are receiving threats from the state institutions as well as the 'good Taliban,'" Wazir added.

Human Rights Watch said on March 13 that the Pakistani government "needs to end its longstanding discriminatory laws and practices against Pashtuns and act to end hostile attitudes toward them."

"This process could start by dropping the criminal cases against Manzoor Pashteen and other protest leaders wrongfully charged, fully investigating and fairly prosecuting those responsible for Naqeebullah Mehsud's death, and letting Pashtun voices be heard," it added.

PTM leader Pashteen has acquired a "rock star activist" stature in the past few months. His rise to prominence has taken many by surprise. In Khyber Pakhtunkhwa province, which is governed by cricketer-turned-politician Imran Khan's conservative Pakistan Tehreek-e-Insaf (Movement for Justice, PTI) party, the "common man" Pashteen has managed to motivate the working class people on a grassroots level.

The PTM has also taken social media by storm in the absence of any significant coverage on mainstream media.

Senator Usman Kakar of the Pakhtunkhwa Milli Awami Party is not part of the movement, but he can relate to some of the PTM demands.

"The PTM demands that all 'missing' Pashtuns should be produced before the court of law. It demands that all landmines in the northwestern tribal areas be cleared and the army stops demolishing Pashtuns' houses on suspicion of militant links," Kakar told DW.

"The [Pashtun] anger had been simmering for years. If it wasn't Pashteen, someone else would have started the movement," Kakar said.

Saleem Shah, an Islamabad-based researcher and social activist, says the PTM is different from other nationalist groups in the province. "No political group in Pakistan has challenged the military the way the PTM has. It is a movement run by the youth. It has become an international movement as Pashtuns across the globe are supporting it by holding solidarity rallies in different parts of the world," Shah told DW.

The big question is whether the movement can survive without a proper organizational structure.

"Mainstream Pashtun parties have an organizational structure and a political manifesto; the PTM doesn't," underlined Kakar, who admits that Pakistan's political parties are fearful of this new movement in a strategically important province.

"Pashtun nationalist parties usually do not want to offend the military because it could affect their political role. But Pashteen's claim to fame is that unlike other politicians he is clear about what he wants," Kakar said.

The Afghan government, which usually refrains from commenting on Pakistan's domestic politics, has lauded Pashteen's campaign. Members of the Afghan parliament have called on Kabul to provide help to protesters in Pakistan. Afghan President Ashraf Ghani shared several tweets about the "Pashtun march" in February, hoping that it would succeed in "uprooting and eradicating terrorism from the region."

"I fully support the historical Pashtun Long March in Pakistan. The main purpose of which is to mobilize citizen against fundamentalism and terrorism in the region," Ghani said on Twitter.

The Pashtun issue has been a sensitive one for Pakistan since the South Asian country gained independence from British rule in 1947. With a large Pashtun population in both Afghanistan and Pakistan, the idea of an independent Pashtun-majority homeland baffled Pakistan right from the beginning. Some scholars say Pakistani authorities favored Islamization of the region to rein in the "Pashtunistan" movement, led by liberal and secular politicians and activists.

The PTM could be viewed by Islamabad as another such effort to unite Pashtuns from both sides of the border, although the group hasn't said anything about it.

"Can the PTM unite Pashtuns across the Durand Line [Afghan-Pakistan border established by the British]? I think it is already doing it. Rallies have been staged in the Afghan city of Kandahar — the birthplace of the Taliban — Jalalabad city and the capital Kabul, in support of the PTM. Common Afghans are raising slogans of peace," researcher and activist Saleem Shah said.

But Kabul's endorsement of the PTM could prove to be a double-edged sword. Some groups in Pakistan are already accusing Pashteen and the PTM of "foreign backing."

"Ghani's government feels it could use the situation as a bargaining chip in Afghan peace negotiations," he added.

But many Afghan activists support the PTM movement because they see a direct link between the situation of Pashtuns on both sides of the Afghanistan-Pakistan border.

"When Pashtuns in Pakistan have access to better education and when they are not treated like second-class citizens, there will no longer be safe havens for terrorists in their areas," Faiz Mohammad Zaland, a lecturer at Kabul University, told DW.

But some say that Afghanistan's direct or indirect support to the PTM could be harmful for the movement.

"What Kabul is doing could backfire because Islamabad will use it as an excuse for its support for the the Taliban," Fakur said.