Park pushes the dream of Korean reunification | Asia| An in-depth look at news from across the continent | DW | 24.01.2014

South Korean president describes a single Korea as a jackpot for the whole of northeast Asia. Polls suggest the majority of South Koreans support the concept, but there are deep concerns over the cost of reunification. 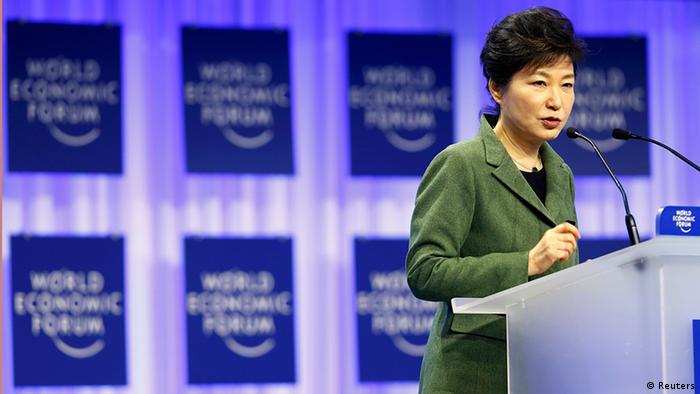 Speaking in the Swiss ski resort of Davos, on the fringe of the annual World Economic Forum, South Korean President Park Geun-hye told reporters on Wednesday that the melding of North and South Korea into a single nation would prove to be a blessing for both. She said it would also bring peace and prosperity across the region.

"I think unification would be a great benefit for neighboring countries," Park said, indicating that it would trigger massive foreign investment in North Korea, major infrastructure projects and have a dramatic economic knock-one effect in China, Russia, Japan and beyond.

"As unification can provide the northeast Asia region with a fresh growth engine, I think it will be a jackpot not only for South Korea, but also for all neighboring countries," she added.

The vast majority of South Koreans agree with her, although their reasons are more varied than simply an economic boom. Many have relatives stuck in the North that they have never been able to meet since the Korean War ended in 1953 in a stalemate at the heavily fortified Demilitarized Zone. 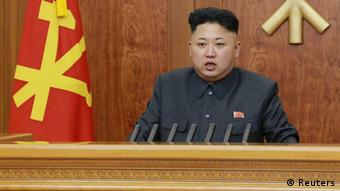 Kim Jong Un has reportedly replaced nearly half of the most important officials, cadres and officers since he took power

Others simply want to stop living in the shadow of North Korea's bellicose warnings of invasion, nuclear attack or artillery bombardment of civilian areas.

In a poll conducted by the Hyundai Research Institute in November, 78 percent of South Koreans said they were in favor of the reunification of the peninsula, with the highest support rate amongst the elderly. More than 84 percent of people aged 50 or older want to see the nation as one.

But the promises of a politician, the dreams of a populace and the reality are not always easy to reconcile.

"Park has been making these comments in Europe and there are plenty of people who seem to believe that it will be as easy as she says, but they don't know the situation here in Korea," Daniel Pinkston, a North Korea analyst with The International Crisis Group in Seoul, told DW. "I sincerely hope that I am wrong because there is no doubt that a reunified Korea would be beneficial to regional and world peace, and there would be huge economic pluses. But there are all sorts of problems with this scenario," he added.

The first problem that Pinkston believes will put an immediate brake on the rush towards reunification is the simple fact that Kim Jong-un appears to have effectively consolidated his power in North Korea, removing those who posed a threat to his regime, shunting old guard generals and functionaries out to pasture and bringing in people who are loyal to him and him alone.

Dennis Rodman, Kim Jong Un and Park Geun-hye all have their own distinct approaches towards achieving a breakthrough in diplomatic relations on the Korean Peninsula. None of them seems destined to achieve that aim. (07.01.2014)

Two years after the death of his father, Kim Jong Un has attempted to assert his authority in North Korea by ordering the execution of his uncle and mentor and filling the regime with apparatchiks loyal to him alone. (16.12.2013)

"I don't see the military turning on Kim and there is no chance of a revolution, so what is going to topple this regime?" he asked. "I just don't see it going away anytime soon."

And even should the political situation be ripe for change, many in the South would baulk at the estimated cost of reunification to the national economy. In 2013, Seoul's Ministry of Strategy and Finance estimated that fusing the two countries would cost 80 billion dollars a year for a decade. Others have suggested an even higher burden, with The Wall Street Journal suggesting that the final tally might nudge 5 trillion dollars over a period of 30 years.

Much of the outlays would have to go on rebuilding the infrastructure of the North, as well as introducing the basics that people in the South take for granted, such as hospitals and education facilities.

There is, of course, a precedent that economists can turn to for a yardstick of the cost. German reunification had cost an estimated 1.9 trillion dollars by 2009, although experts also point out that East Germany was in a far more advanced social and industrial state when the Berlin Wall came down than North Korea finds itself in today.

China will have a say

And while President Park seems to assume that a future single Korea will be on the South's terms, China might dispute that position. Many believe North Korea is essentially a client state of Beijing, which finds it convenient to have a buffer on its northeast border that keeps capitalist South Korea and the United States military presence at arms' length.

The last thing that Beijing wants on the Tumen River border is a united, capitalist Korea that has the military backing of the US. 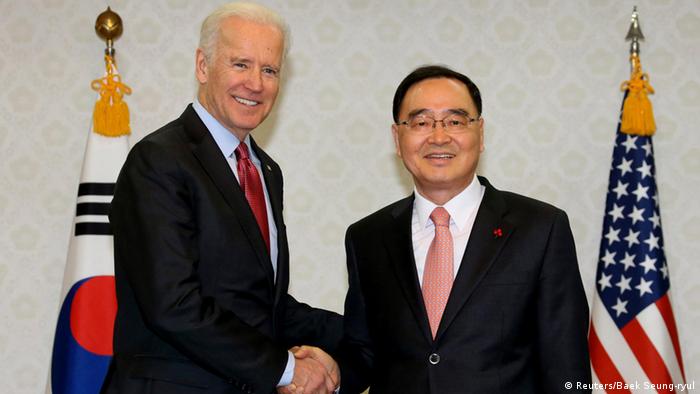 And, inevitably, North Korea is going to want to have a say on how a unified nation will look in the future. And Pyongyang's vision is exceedingly different to that of Park's.

"It is typical that they assume they will take over North Korea by force," said Kim Myong-chol, executive director of The Centre for North Korea-US Peace, and an unofficial spokesman for the regime in North Korea.

"Park's comments have no merit and her ideas have no chance of success," he told DW.

"But we do agree that there will be reunification within two years," he added. "We expect to have a two-system formula in place in that time, with North Korea exerting ultimate leadership."

The experts said that by that time, the US and South Korea would both bow to North Korea's military and economic superiority. "The recent discovery of vast deposits of scarce natural resources, including rare earth minerals, gives North Korea a virtual monopoly on the sector. The US, Europe and Japan will have to ask North Korea for cooperation and aid," he said.