The coronavirus is forcing some Brazilian parents to work from home, mind their own kids and clean their own houses. That has threatened the livelihood of the mostly female labor force that had tended Brazil's homes. 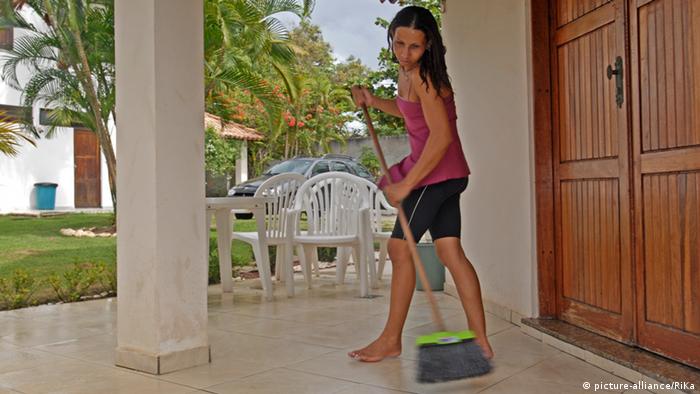 Instead of doing the cooking for the family she works for, Nilza de Jesus Almeida now sends her employer recipes over the phone. Her employer has turned into an enthusiastic chef, while the family's usual cook has become a coach. The 70-year-old Almeida scrolled through the photographs her employer had sent her. Her boss could not have prepared the eggplant lasagna any better, Almeida said. "She cooks rice and beans, souffle, shrimp with vegetables, everything," Almeida said. "I explained every dish in detail over the phone. In two weeks, she learned everything." The coronavirus pandemic seems to have triggered a development previously unthinkable in Brazil: Many families have temporarily given up the domestic workers, or "empregadas" — the Portuguese word for maid; the labor performed is most commonly done by women — who look after their households and their children. Domestic service is part of the legacy of enslaved labor, which was not abolished in Brazil until 1888. It wasn't until 2013 that domestic workers were given the same protections as regular employees. In practice, discrimination against domestic workers in Brazil continues.

About 8 million people work as maids in Brazil — half of them without formal contracts. Many of them are black women from poor backgrounds.

The coronavirus pandemic has caused wealthy Brazilians to question whether domestic workers are as indispensable to their homes as they had believed. Many domestic workers are currently unemployed — often their employers have lost their jobs and let them go in order to save money. Surprisingly, many employers working from home have gotten used to doing their own cooking and to cleaning. There is also a higher-tech threat to domestic workers' jobs: Supermarkets deliver groceries, meals and meal kits that come with recipes and ingredients, can be ordered online, and are delivered free.

"If they keep it up, they will probably only need the empregada once a week instead of every day," said Maria Noeli dos Santos, the director of Fenatrad, the national federation of domestic workers. That has been "happening more and more often," she said. Because of their precariousness and the changing labor market, Noeli dos Santos added, "many go to work during the pandemic and put themselves and others in danger": Workers simply can't afford to lose their jobs.

To save for retirement, the 64-year-old Noeli dos Santos is employed as a domestic worker in addition to coordinating the union's efforts. "Once you get used to the advantages, you don't want to do without the services of a domestic worker," she said.

Since March, when the first pandemic restrictions were imposed, domestic workers across Brazil have sought alternative incomes. "Many have tried new things at home," Noeli dos Santo said. "Some prepare meals and sell them. Others offer manicures. If it works, they continue; if it doesn't, they will try to work again as empregada.".

One of the first people to die of COVID-19 in Brazil was the 63-year-old domestic worker Cleonice Goncalves in March. She contracted the virus from her employer, who got it while on vacation in Italy.

The employer had suspected that she might have the virus, and even got herself tested — but she didn't tell Goncalves. When the positive test result came, Goncalves was already dead.

"The social inequality that already existed before the pandemic is taking on cruel traits and hits the weakest hardest," the Brazilian sociologist Ricardo Antunes wrote in his new book on labor during the coronavirus. "The working class has no choice — either it dies of COVID-19, or it dies of hunger."

Goncalves' death shows that there are still many Brazilian families from the middle and upper classes who do not want to do without their domestic servants — even during a pandemic. Many employers now arrange and pay for rideshares so that domestic workers won't have to take public transportation, and risk being exposed to the virus.

"Apart from me, all my colleagues go to work," Almeida said. "Their employers want them to show up even if they or the employer have COVID-19."