Pakistan′s crackdown on free press leaves journalists vulnerable to attacks | Asia | An in-depth look at news from across the continent | DW | 09.11.2021

Journalists in the South Asian nation are facing draconian media laws and a culture of impunity, which has opened the door to intimidation and threats on social media. 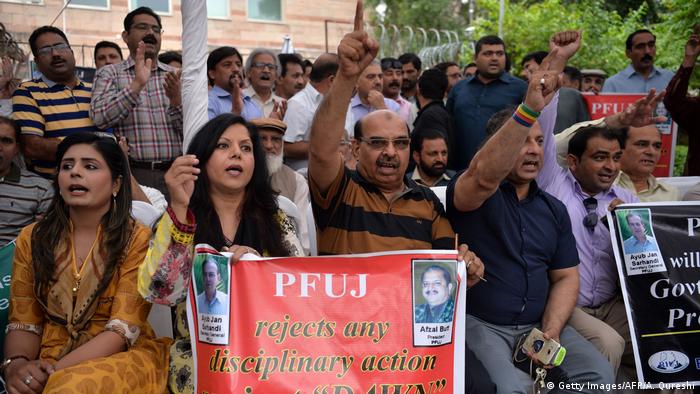 Journalists in Pakistan are currently working in an increasingly authoritarian environment, and encounter systemic censorship, violence and limits on free speech, according to Pakistani and international media watchdogs.

One report from the Pakistan Press Foundation (PPF), released last week in conjunction with the UN's "International Day to End Impunity for Crimes against Journalists," highlighted the "increasingly repressive environment" faced by Pakistani journalists.

The report said journalists publishing work online are "often on the receiving end of hate, threats and abuse."

"The past year has seen the continuation of trends to threaten and intimidate journalists online. While both private individuals online and members of the government continue to participate and initiate trends against certain media professionals and organizations, there is also an increased focus on setting up rules for social media platforms," the report said.

In June, a draft law was proposed for a government entity called the Pakistani Media Development Authority (PMDA), which would have sole power over media regulation in Pakistan.

Reporters Without Borders (RSF) said the PMDA would be able to hand down "arbitrary decisions with no possibility of appeal by journalists or public," and compared it to a "centralized censorship office typical of the worst authoritarian regimes."

Another proposal in October from Pakistan's Information Technology and Telecommunication Ministry is called the "Removal and Blocking of Unlawful Online Content."

It would give authorities the "right to control and censor any type of message posted on social media platforms," RSF said.

Rimmel Mohydin, a South Asia campaigner with Amnesty International, told DW that media in Pakistan is facing a "structural attack" by authorities.

This includes applying pressure on independent media houses, their advertisers, their owners and individual journalists to "toe the line," and not hold power to account.

"Dissent is being consistently treated like a crime," Mohydin said.

"Journalists have faced physical violence, censorship and now face the possibility of the PMDA actually materializing, which will further curb the journalistic freedom," she added.

In July, Khan was featured on the RSF's "red list," along with several other heads of government who have clamped down on press freedom.

"Press freedom is in a decidedly not good place in Pakistan," Michael Kugelman, a South Asia expert at the Washington-based Woodrow Wilson Center for Scholars, told DW.

Ismat Jabeen, an Islamabad-based journalist and press freedom activist, told DW that Pakistan is facing one of its " worst periods of coercive censorship that is both overt and covert."

"This is in proportion to the rising intolerance of a state dominated by security imperatives that it doesn't want scrutiny of," Jabeen said. She added that it is not in the interest of the government to provide a space for dissent in the media.

In Pakistan, female journalists say they are increasingly targeted online with harassment, including rape threats, according to the Committee to Protect Journalists (CPJ), a New York based media watchdog.

"Many of these journalists have told Amnesty International that they have had to deactivate their personal social media accounts," Mohydin said. Some of the attacks even come from officials, she added.

"If authorities object to the work of a journalist, they have the right of reply, but must never target them on the basis of their gender or use abusive language," she said.

"Authorities have a particular responsibility to protect women from gender discrimination and must lead by example and demonstrate through their own actions why journalists must be respected and protected, and discourage attacks launched by their supporters or trolls," Mohydin added.

"In Pakistan, social media and the broader online space are really the sole remaining repository for liberal and progressive thought, and that includes criticism of the state and especially the military," analyst Kugelman said.

"It's natural that the state would seek to crack down on online dissent. And in a country with a highly patriarchal and sexist society, it's unsurprising that women journalists would face the brunt of this," he added.

In Islamabad alone over the last six months, around 30 incidents of violence against journalists were reported, but not a single culprit was arrested.

"The community of journalists and media practitioners in Pakistan feel that without specialized laws on safety for them, the impunity of attackers cannot be lessened. The attacks continue to happen because attackers go unpunished," said Jabeen.

Mohydin echoed a similar view, blaming also Pakistani society's general apathy toward what happens to journalists for contributing to the problem.

"The lack of meaningful legislation and its implementation, a general apathy towards what happens to journalists, vicious online campaigns to cast doubt on their credibility, and a misplaced belief that the press presents a threat to the country all combine to make holding attackers accountable a rarity," she underlined.

Zulfikar Ali Bhutto Jr: No place for me in Pakistan's non-serious political landscape 16.08.2022