Pakistan: Media regulation bill proposes jail term for journalists | Asia | An in-depth look at news from across the continent | DW | 15.09.2021

Critics say a plan to consolidate media regulatory agencies will further shrink press freedom in the country. Journalists and opposition parties have decried the law as "draconian" and unconstitutional. 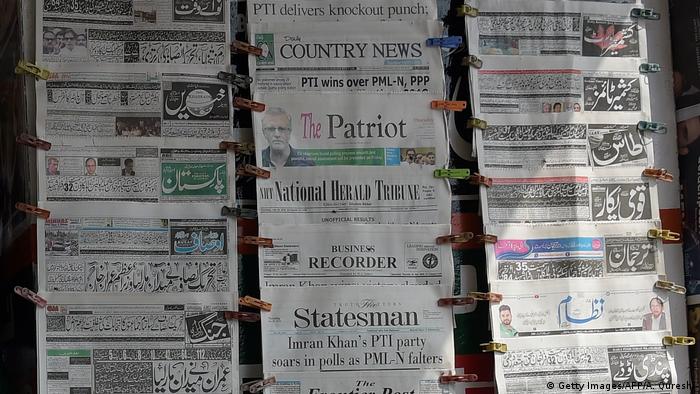 As Pakistan's President Arif Alvi addressed the parliament on Monday, hundreds of Pakistani journalists converged outside to demonstrate against a proposed law that they say would undermine press freedom in the South Asian country.

Under the proposed legislation, the government aims to converge several media regulatory bodies in Pakistan and expand the scope of regulation for digital media, while envisaging the establishment of a new regulatory body called the Pakistan Media Development Authority (PMDA). Media advocates have vehemently opposed the government move, labeling it as yet another attempt to gag freedom of the press.

"The proposed law is draconian in scope and devastating in its impact on the constitutional principles," Shahzada Zulfiqar, the president of the Pakistan Federal Union of Journalists (PFUJ), told DW.

After Monday's sit-in, the PFUJ vowed to hold similar protests in other major Pakistani cities against the proposed law.

"This is censorship by another name," said Zulfiqar.

"Some people don't want journalists to think freely," said Pakistan Peoples Party Chairman Bilawal Zardari. "We should not yield to them."

Federal Minister for Information and Broadcasting Fawad Chaudhary told DW: "We are trying to engage with the protesting journalists and allow them to submit proposed changes if they have reservations [about the law]. We will not forcefully pass the law and will go through the legislative process with the consensus of all stakeholders, including opposition parties."

What exactly would the proposed law do?

The controversial law proposes placing all media including print, broadcast and social media under the jurisdiction of one regulatory agency, the Pakistan Media Development Authority (PMDA). The agency would replace multiple media regulatory bodies in Pakistan.

"The proposal ignores the fact that each media has distinctive characteristics that cannot be governed under one authority," said PFUJ chief Zulfiqar.

The body would be headed by a serving bureaucrat of the federal government, while its board of eight people would include four government officials and four media stakeholders.

It would not only issue guidelines on covering national security issues but also issue no-objection certificates (NOCs) for film production and screenings.

But Pakistan already has limited press freedom due to a vague definition of issues relating to national security.

The bill, which was kept secret until it was leaked to the media, also suggests that the authority should determine media workers' wages and resolve wage disputes.

The proposal also envisaged special tribunals operating under the authority, while its decision could be challenged only at the Supreme Court of Pakistan. The tribunals will have the power to hand down punishments of up to three years in jail and fines of up to 25 million Pakistani rupees (€124,181, $146,848) to content producers for violating the new provisions. Fake news and hate speech labels are also often used vaguely in Pakistan to silence dissent.

"The proposed PDMA is a completely unneeded piece of legislation that will give the government new tools to control and manipulate the media," Steven Butler of the Committee to Protect Journalists told DW.

"This comes in an environment where the media is already under tremendous pressure from authorities to keep critical reporting off the air and out of newspapers."

Can the bill pass through parliament?

Legal experts believe the bill is likely to be passed by the National Assembly. However, the ruling coalition lacks the required strength in the upper house of parliament.

The government could, however, call for a joint sitting of parliament to get the bill passed through a majority of the combined membership of both houses.

Regardless of how the bill is made into law, its constitutionality is likely to be challenged by media and rights groups as well as opposition political parties, senior legal expert Osama Malik told DW.

"The opposition does not have the strength to stop this bill through legislative means, but political means such as street protests are available to it."

"The opposition will jointly oppose this black law," Zardari of the Pakistan People's Party told journalists, adding that they would fight the law through all available means even if it passed.

Censorship on the rise

Pakistan's censorship drive has gathered pace under Prime Minister Imran Khan, who has sought to placate powerful conservative and religious constituencies. In July, Khan was featured on the red list of Reporters Without Borders (RSF), along with several other heads of state who massively clamped down on press freedom.

"Press freedom is certainly shrinking under Imran Khan. Journalists have lost a record number of jobs, critical investigative magazines like the Herald and Newsline have shut down, despite surviving dictatorships, and critics' voices have been removed from TV," Usama Khilji, a digital rights activist, told DW.

Journalists and bloggers have complained of intimidation tactics including kidnappings, beatings, and even killings.

In Islamabad alone, over the last six months, around 30 incidents of violence against journalists were reported, but not a single culprit was arrested, Press Freedom Action Committee chairman Afzal Butt told DW.

In recent years, the space for dissent has shrunk even further, with the government announcing a crackdown on social networks and traditional media houses that critics say has resulted in widespread self-censorship.

"The media regulatory framework in Pakistan does need to be amended. With journalists under relentless attack for doing their jobs, the government needs to stop trying to control reporters and instead start protecting media freedom," said Gossman of Human Rights Watch.