Anti-Islam politician Geert Wilders' plan to hold a Prophet Muhammad cartoon contest has sparked protests in Pakistan. It comes after a man was arrested in Belgium for threatening to attack Wilders over the competition. 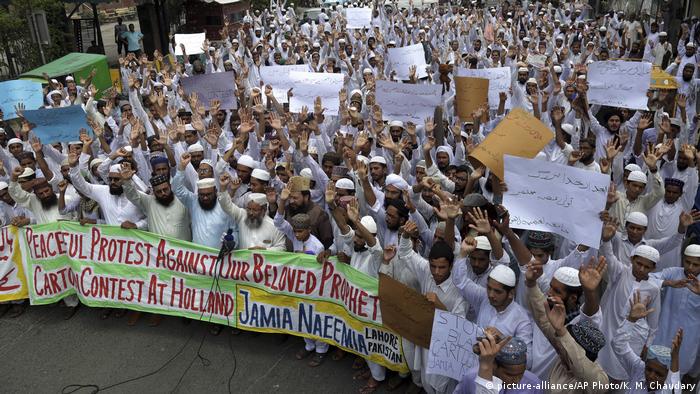 Some 10,000 protesters participated in the march, chanting "we will die to protect the honor of the Prophet," and holding a large banner that said they were holding a "peaceful protest."

The demonstration was organized by Islamist groups that made surprising advances in the July elections, and came one day after Dutch police arrested a 26-year-old man suspected of threatening to attack Wilders over the contest.

Images of Prophet Muhammad are traditionally forbidden in Islam as idolatrous, and caricatures are regarded by many Muslims as highly offensive.

Wilders is an outspoken critic of Islam, and has made controversial comments regarding the Prophet Mohammed in the past, including announcing plans to show cartoons depicting the Prophet Muhammad on Dutch television.

The man arrested for allegedly threatening Wilders was taken into custody on Tuesday in The Hague, police spokesman Jan Rensen said, without identifying his nationality.

He is believed to have posted a video on Facebook on Monday in which he said he was five minutes away from the parliament building and said he was targeting the anti-Islam politician.

"Only that blasphemer [Wilders] is my target," the man said in the video, which was shown on national broadcaster NOS. "I believe that God will help me succeed ... they're making jokes about our Prophet."

Denmark's immigration minister has posted a screenshot showing a caricature of Islam's Prophet Muhammad on Facebook. The cartoon is one of several that caused international outrage over a decade ago. (26.09.2017)

Opinion: The wrong lessons to take away from the Charlie Hebdo attacks in Paris

The European leaders demanding that governments be allowed to access encrypted communications have learnt nothing from the terrorist attacks in Paris, writes DW's Michael Münz. (25.01.2015)