Pakistan: Rampant inflation piles on the pressure | Asia | An in-depth look at news from across the continent | DW | 15.11.2021

Pakistan is witnessing an unprecedented economic turmoil, with the inflation rate rising exponentially. DW spoke to some locals who say it has become impossible for them to make ends meet. 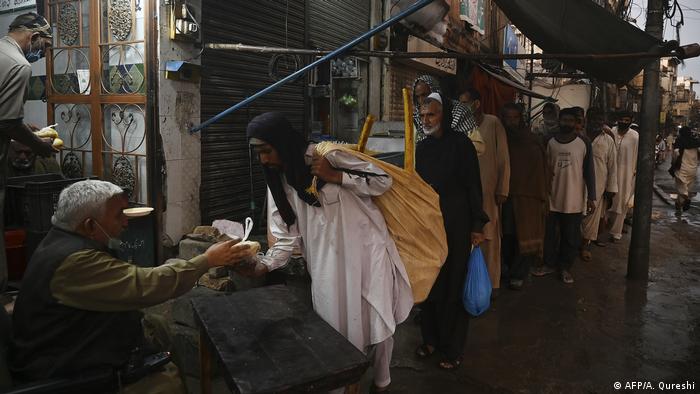 Abid Hussain, 40, a factory worker in Faisalabad city, says he is planning to send his two children to an Islamic madrassa as he cannot afford to pay their fee for a private school. The madrassa offers free education, boarding and meals, he said.

"My wife is not in favor of the children's madrassa education," he told DW. "But I earn around rupees 28,000 (€139) per month, and my income is not sufficient to make ends meet. I pay around 3,000 rupees only for the electricity bill," he added.

Hussain lives in a small house that he shares with his brother and his family. The nine family members are crammed in two rooms, as they cannot afford to rent a bigger house.

Prime Minister Imran Khan's government has come under heavy criticism for not reining in the price hike. The petrol price is over 145 rupees per liter, and the rupee value is rapidly depreciating.

Khan, who came to power in 2018, vowed to fix the country's economy and improve governance, but experts say that after three years at the helm, he has not been able to deliver on his promises. His popularity, therefore, has been waning, and political experts suggest it would be difficult for him to secure a second term in the 2023 general election.

According to Pakistan's Dawn newspaper, in the past three years, the vegetable oil price has risen 27% on average. Retail prices for cooking oil, sugar and pulses have also increased manifold since October 2018.

Dr Azra Talat Saeed, a prominent economist, says the gasoline price has seen a hike of 49% in just one year.

An official at Pakistan's Poverty Alleviation Fund told DW on condition of anonymity that they have been flooded with phone calls and applications for financial assistance, adding that even sections of middle-class Pakistanis are applying for educational funds as they want to save money for food items.

Laborer Hussain says he cannot afford to buy fish and mutton anymore. "We can only eat meat on special occasions," he said. "The last three years have economically been the worst in my life because of the high inflation," he added.

Hussain is not the only one who is facing financial hardship. Laal Khan, a 50-year-old cab driver in Islamabad, told DW that his children were recently expelled from school because he could not pay their fee. "Then I contacted the Poverty Alleviation Fund, which paid the fee, but I don't know how I am going to pay the fee for the next month."

Khan said the economic situation was much better in 2018. "I could at least make ends meet, but I don't know how we are going to survive now."

Economist Saeed says that Pakistan's 2019 economic deal with the International Monetary Fund (IMF) is responsible for the price hike. "Finance and revenue advisors to PM Khan have acknowledged that the IMF wanted Islamabad to increase electricity and gas prices, as well as taxes," she told DW.

Pakistani finance officials are trying to close a deal with the IMF to release a suspended $1 billion (€0.87 billion) tranche from a bailout package, which Islamabad says is desperately needed to stabilize the country's struggling economy.

In May 2019, Khan's government reached an agreement with the IMF after months of difficult negotiations on a $6-billion bailout package.

The 39-month bailout program is subject to regular IMF reviews of Pakistan's economic policy and growth.

In January 2020, the program was put on hold after Prime Minister Khan did not follow IMF recommendations to increase electricity prices and impose additional taxes.

In March 2021, the IMF released a $500 million tranche, but talks in June to release further funds were inconclusive.

Pakistan's economy contracted by 0.47% in 2019-20 during the coronavirus pandemic, which hobbled the already weak economy.

Prime Minister Khan's top finance adviser, Shaukat Tarin, said last month he was optimistic that the latest round of negotiations on economic reforms with the IMF would result in the disbursement of the $1 billion tranche. In total, Pakistan has so far received $2 billion out of the $6-billion package via the IMF.

Fluctuation in the global market

Opposition parties are blaming Khan's government for the economic mismanagement, but authorities say the instability in the global market due to the COVID pandemic is the main reason behind rising inflation in Pakistan.

"We are not responsible for this inflation," Jamshed Iqbal Cheema, a former advisor to PM Khan on food security, told DW.

"Prices have increased in the global market, and this has had an impact on Pakistan as well," he said, adding that the government has offered subsidies to mitigate the financial hardship for citizens.

Amid the economic turmoil, the poor are relying on charity organizations to avail basic food items. An official at the Saylani Welfare Trust non-governmental organization told DW on condition of anonymity that more people are seeking food items and financial assistance than ever before.