Sunday's by-elections were dubbed an early test to the popularity of PM Khan, who has been criticized for "mishandling" the country's economy. Losing a number of seats in parliament doesn't augur well for his government. 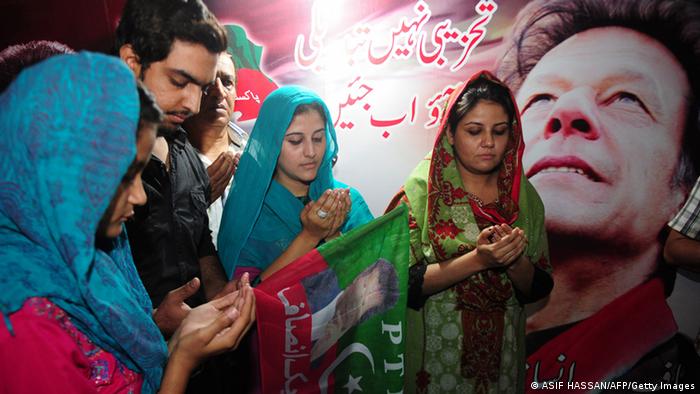 The ruling Pakistan Tehreek-e-Insaf (PTI, Movement for Justice) party was hoping to win most seats in the by-elections, but unofficial results show that the Pakistan Muslim League (PML-N) of former PM Nawaz Sharif managed to make considerable gains in the polls.

11 National Assembly (lower house of parliament) and 24 country-wide provincial assembly seats were up for grabs in the Sunday polls, which were dubbed a preliminary test for Prime Minister Imran Khan, who won the July 25 general election, albeit with a simple majority.

Most of the seats where by-elections were held had been vacated by candidates who contested the general election in more than one seat. This included PM Khan, who had contested in five National Assembly constituencies in the July 25 polls and won all of them.

According to the initial results of the by-elections, the PML-N and the PTI bagged four National Assembly seats each out of 11. The PTI came on top in nine provincial assembly seats as compared to six for the PML-N. But more importantly, the ruling party lost a number of seats to Sharif's party, including the ones vacated by the premier.

In short, the PML-N not only retained two of its National Assembly seats, it also unseated Khan's party from two constituencies. 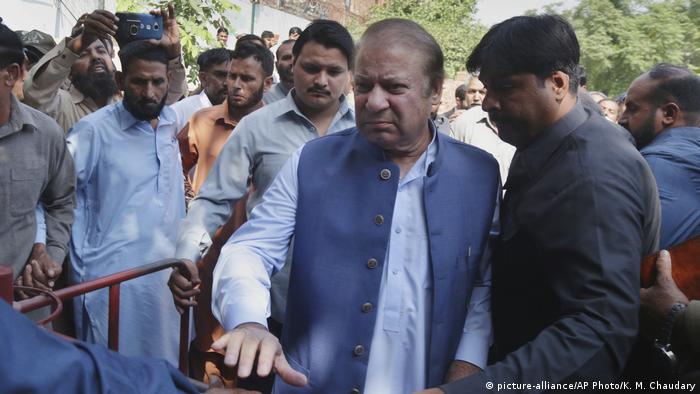 Former PM Nawaz Sharif is hoping for a comeback

Fawad Chaudhry, the country's information minister, told media on Monday that Khan's absence from the by-election campaigning was the reason behind losing ground to the PML-N.

He said the PTI "would have won at least nine of the 11" National Assembly seats had PM Khan led the election campaign.

But some political experts see the results as a sign of a decline in Khan's popularity.

Khan won the general election on the promise of "change" and fixing the country's failing economy, with a strong emphasis on eradicating corruption. But since being inaugurated as prime minister in August, his administration has not really lived up to the expectations.

Although Khan launched an austerity drive to reduce government expenses, critics say the move has been largely superficial, as the PM's team has no real economic plan to fix Pakistan's serious structural issues.

"Pakistan is a security state whose parliament never debates the defense budget. The military's expenditure does not even go through a parliamentary audit," Muhammad Ziauddin, former editor of the Express Tribune English newspaper, told DW.

"The military generals are running hundreds of businesses in the country, yet they pay very little tax. Still, Khan's austerity drive does not cover the generals' luxurious lifestyle. If the new government really wants to turn things around and improve the economy, then it should reduce the mammoth military budget and impose taxes on the military's economic empire," Ziauddin added.

The country's trade deficit is also skyrocketing — $37.7 billion in the 2018 fiscal year. In the same fiscal year, Pakistan spent a whopping $60.9 billion on imports, with a big chunk going to the import of machinery for the China-led multibillion-dollar Pakistan-China Economic Corridor (CPEC) infrastructure development initiative.

The petroleum and gas prices have spiked in the past month, and the government has asked for a multibillion dollar bailout from the International Monetary Fund (IMF). As opposition leader, Khan often slammed former premiers for "begging" international financial institutions to rescue the country. The IMF bailout request is being seen as one of the many U-turns Khan's populist government has taken since coming to power.

"Some of their (the government's) rhetoric and actions are markedly superficial, which does not bolster confidence in their approach," Madiha Afzal, an assistant professor at the University of Maryland's School of Public Policy and a non-resident fellow at the Brookings Institution, told DW.

But Senator Faisal Javed Khan told DW the main thing is to restore people's confidence in the government. "The Pakistanis are generous people and they gave a lot of donations to Imran Khan [for his cancer hospital]. They did so because they trust him. And because they have faith in their prime minister, I'm sure they will also pay taxes," Khan said.

Not a big dent

The poor performance in Sunday's by-elections, however, should not be seen as a threat to Khan's rule, experts warn.

Khan's supporters say it is too early to evaluate the performance of Khan's government and that Pakistan's economic and security issues need a long-term plan.

Also, Khan still enjoys the backing of the country's powerful military, as many analysts claim the generals helped Khan win the July 25 election.

"Most political parties have challenged the fairness and transparency of the July 25 general election," Asif Kirmani, a Sharif aide, told DW.

Although Former PM Sharif was released from jail on bail last month, he is still facing corruption charges and is not completely off the hook. Earlier this month, Shahbaz Sharif, his brother and the current PML-N head, was also arrested on corruption allegations by the National Accountability Bureau.

"Sharif can create problems for Khan. The incumbent premier is responsible for Sharif's ouster, so I think the former prime minster will try to make things difficult for Khan," Amjad Shoaib, a retired military official, told DW.

"Sharif will try to unite the opposition against Khan. He is likely to hold public rallies and demonstrations. He is also free to speak against the [military] establishment," Shoaib said.

Analysts, however, say the PML-N is not in a positon to pose a big challenge to Khan in spite of performing well in the by-elections. Still, a continued "bad performance" by Khan's government could persuade all opposition parties to join forces and increase pressure on the current administration.