How the COVID-19 crisis is affecting Pakistan's economy

Pakistan's already fragile economy had only just been moving towards stability when the health crisis struck. Experts fear that the pandemic's economic fallout will considerably derail the country's recovery process. 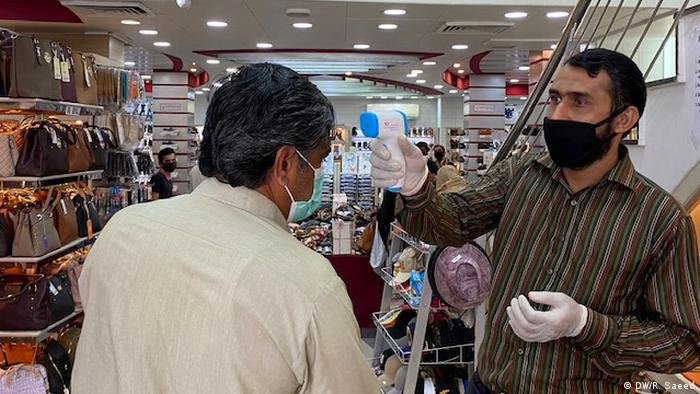 Pakistan has so far registered nearly 270,000 cases of the coronavirus and over 5,700 related deaths. A week ago, President Arif Alvi congratulated the nation for its "victory" against COVID-19 during an interview with a local broadcaster. Alvi said the government successfully saved the country's poorest from the financial impact of the pandemic.

At the time of Alvi's commendation, the confirmed number of COVID-19 patients in Pakistan stood at 259,998 and 2,085 new cases had been recorded in the last 24 hours.

Prime Minister Imran Khan's government says the drop in the daily number of new coronavirus cases in July is due to its "smart lockdown" strategy. But observers say the trend could be a result of misreporting and inadequate testing.

The pandemic has also taken a devastating blow on the Pakistani economy.

"Pakistan's economy is shrinking, unemployment is rising and various sectors are in crisis," warned Zafar Moti, the former director of the Karachi Stock Exchange (KSE). Moti told DW he is less concerned about Pakistan's financial markets and more concerned about the long-term impact of the pandemic.

Pakistan's exports primarily comprise of textile products. These exports are down since the COVID-19 crisis started, with some orders even being canceled. Moti does not expect demand to pick up again post pandemic. "All of this will negatively impact foreign reserves and ultimately the currency value. In the long run, financial markets will also be negatively affected," he said.

When Khan took power in 2018, Pakistan's GDP growth was around 5.8%; now it is 0.98% and is likely to decline further. The country's fiscal deficit is almost 10% and revenues have plummeted in the past two years.

Pakistan's public health system was overstretched long before the onset of the coronavirus pandemic. On average, Pakistan has one doctor for every 963 people and one hospital bed for every 1,608 people, according to UNDP figures. Pakistan faces a shortage of 200,000 doctors and 1.4 million nurses to cope with the crisis.

In early 2019, in the face of a monetary crisis, Pakistan reached out to the International Monetary Fund (IMF) for a bailout package worth six billion dollars. The economy was only just recovering from the crisis when the pandemic struck.

Due to the pandemic, an additional 2.45 million people now suffer from food insecurity. One third of Pakistan's population live below the poverty line while 66% of the population — or 145 million people — living in poverty, requires immediate relief.

Prime Minister Khan launched the Ehsaas Emergency Cash financial relief program on April 1 in an attempt to help the most vulnerable part of the population in the wake of the pandemic.

But for business journalist Hamza Farooq Habib, the short-term solution is not sustainable. He thinks the government has been downplaying the crisis right from the beginning and doubts the president's claims of giving relief to the poor.

"We still don't know the real number of the [coronavirus] cases," Habib told DW. "The National Institute of Health (NIH) recently conducted a survey which shows that the number of affected people in the capital city of Islamabad stood close to 300,000, although according to official statistics, just over 14,000 people are infected," he said.

Investment banker and risk analyst Khurram Schehzad expects Pakistan's economy to shrink by $15 billion as a result of the pandemic. He also predicts a 10% decline in gross domestic product (GDP) in the fourth quarter of the financial year 2020.

"Complete or semi-lockdowns can result in no real GDP growth for or over 2% negative growth in FY-20, spreading over to the first quarter of the next fiscal,” Schehzad told DW.

Arecent survey byIslamabad-based research organization Gallup found that Pakistan's unemployment rate is predicted to surge to a whopping 28%. The number of unemployed people in the country is estimated to reach 6.65 million during the fiscal year 2020-21, compared to 5.80 million in the outgoing financial year.

A 30% layoff in the formal sector is also projected due to a prolonged lockdown, resulting in a 189 billion rupees impact on the private sector, Schehzad explained.

In June, the Pakistani federal government unveiled an economic recovery plan worth 1.2 trillion rupees. Provincial governments are also in the process of preparing their own financial packages.

The State Bank of Pakistan cut interest rates for its borrowers by 225 basis points in mid-June, easing pressures from the federal government and businesses facing cash flow problems.

Considering Pakistan's limited financial capacity to bear the costs of the pandemic, experts warn that the country may in the future require assistance from not only the IMF and the World Bank but also from strategic allies like China and Saudi Arabia.