Coronavirus: Is low testing behind Pakistan′s falling daily new cases? | Asia | An in-depth look at news from across the continent | DW | 17.07.2020

PM Imran Khan's government says the drop in the daily number of new coronavirus cases in July is due to its "smart lockdown" strategy. But observers say the trend could be a result of misreporting and inadequate testing. 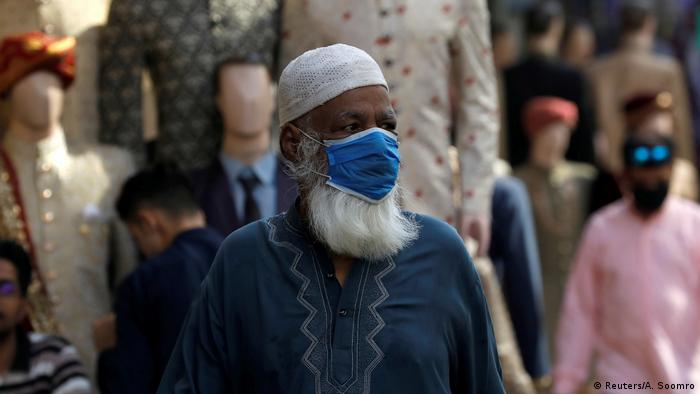 On July 15, the World Health Organization in Pakistan held a technical working group virtual meeting and acknowledged that COVID-19 cases seemed to be slowly falling in the country. Pakistan had reported just 2,165 new cases in the past 24 hours.

The WHO groups Pakistan among the 10 countries with the fastest-growing number of new COVID-19 cases. In a leaked letter in June, the global health body also criticized the government for hastily removing lockdown restrictions.

Read more: Coronavirus latest: WHO urges Pakistan to lock down

Pakistan's overall testing rate also remains low. Prime Minister Imran Khan's government argues that the drop in the increase of daily new cases is due to its policy of "smart lockdowns," but data shows a correlation between the drop in testing and declining new cases.

Asad Umar, a federal minister, dismissed talk of a correlation between the two in a tweet on July 15, instead crediting the government's actions for the positive development.

According to Our World in Data, the latest estimate of Pakistan's daily tests per thousand people is 0.1 as of July 16, a rather sharp decline from 0.13 tests in June. Experts believe that current testing has dropped by at least a quarter.

As per the National Command Operation Center (NCOC), Pakistan has a total testing capacity of 71,780 tests per day, with 133 testing laboratories in total. Currently, it is utilizing only about 40% of the capacity, according to the Ministry of National Health Services Regulation and Coordination.

The NCOC data shows that the government conducted 24,262 tests on July 15 and reported 40 deaths. In contrast, a month ago, on June 13, the total tests done per day were 29,546 and the reported deaths were double the figure recorded on July 15.

Last month, the government said it would increase the rate of testing to 50,000 tests a day from July, a target which is yet to materialize. On June 19, Pakistan conducted 31,681 COVID-19 tests, the highest officially recorded number so far.

Speaking on the condition of anonymity, a government official in a semi-urban district in Punjab province noted that he had direct orders from his superior to omit numbers by almost half. This month he reported 34 new cases, instead of 63.

This is indicative of willful misreporting at the district level and raises concerns regarding the accuracy of the official figures. Misreporting, coupled with a decrease in testing, greatly skews the recorded prevalence of cases in the country, say experts.

How Pakistan-administered Kashmir managed to contain the coronavirus

Given the rise in the total number of infections in the country, people are now more aware of COVID-19 symptoms and are not coming to hospitals unless they become severely ill, Hina Shah [name changed], a doctor at PAF Hospital in Islamabad, told DW.

"Whole affected families are not coming to hospitals, there is some stigma attached but also many people choose to quarantine themselves," she added, underlining that the decline in numbers is also due to people opting not to go to hospitals and get tested.

This view is shared by Maham [name changed], a doctor at Services Hospital in Lahore city. She explained that people are scared of going to hospitals or getting tested for fear of being ostracized in case of infection.

She also noted that at her hospital and others like Mayo Hospital, tests are free but can take almost a week for results to come, which renders the testing pointless. "There is also no real follow-up to check if family members are also infected like there was in June," she added.

According to the Organization for Economic Cooperation and Development (OECD), tracking new cases is imperative to avoid new outbreaks and surges of coronavirus cases, as well as to allow those recovered from the infection to return to work and help revitalize the economy.

Khan's government has opted for "smart lockdowns" as a way to curb the virus' spread while ensuring economic activity continues unperturbed. For this strategy to succeed, experts say, testing and tracing is key, but the recent decrease in testing rates could be counterproductive and hamper the efforts to overcome the immense health emergency.